Drink it In - B-Bar-H Ranch Homes 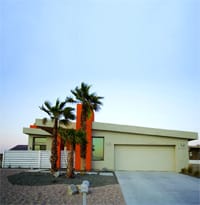 He is no bartender, however. The 1984 graduate of Palm Springs High School is president of Modern Living Spaces, which is building 71 midcentury modern-styled homes with floor plans named after the aforementioned cocktails. "We were going to name them after coffee drinks," Bodon says, explaining that he and his partners spent a lot of time in coffeehouses. "Coffee somehow turned into martinis and then other drinks as we added houses. Until the grand opening, I didn’t know what a Gibson was."

Soon, Bodon heard real estate agents and their clients referring to the development as "the cocktail houses." Modern Living Spaces calls them the B-Bar-H Ranch homes.

B-Bar-H dates back to 1927, when Hollywood film mogul Lucien Hubbard and his son-in-law, Charles Bender, purchased 240 acres from Southern Pacific Land Co. Among the stone structures built by Bender is one Mary Pickford used as a ranch house; another served as her chauffeur’s cottage. Originally enjoyed by Hubbard and his friends, the ranch opened to the public in 1937.

A form letter for referrals to membership in the B-Bar-H Ranch Club touted "a protected playground for small ones" and "a driving range for the older folks." The letter stated that members may own their own weekend or permanent home.

At one time, B-Bar-H memberships cost $100, with annual dues of $24. For $19 dollars, prospective members could enjoy a two-day, two-night stay that included an outdoor steak fry, a social hour and "complimentary punch bowl," and dinner in the Golden Saddle Room.

Retired Hollywood producer Paul Gregory and his late wife, actress Janet Gaynor, stayed at B-Bar-H while rebuilding their Singing Tree Ranch, also in Desert Hot Springs. They kept their horses at B-Bar-H and often visited the clubhouse after riding.

"I went over there one time with Mae West," Gregory recalls, explaining that West had asked to see the place. Among the celebrities he saw there were Marie McDonald; Clark Gable; William Powell; Clara Bow; and RKO owner Floyd Odlum and his wife, aviatrix Jacqueline Cochran.

Gregory says Hollywood celebrities looking for glitz and glamour went to the Racquet Club in Palm Springs, while the rustic setting of the B-Bar-H attracted "people that came to the desert and wanted to be in the desert."

"If you’re looking for a ‘night club tan,’ then B-BAR-H is not the spread for you," reads one of the early brochures. "If you seek the wide, unfettered spaces, graced with the comforts, conveniences and services of a fine hotel without the tinsel, this is it. At B-BAR-H you’ll trade a Cad or a Jag for a nag, swap high-glaring neon for low-hanging stars, swim in natural warm mineral water, enjoy the finest cuisine, sample the ultimate in the mixologist’s art if you wish, and sleep luxuriously in spacious cottages set in an oasis of tamarisk and palms."

The cottages were sold when the B-Bar-H was split up and have been renovated as single-family homes. The bar, then called The Branding Iron and still sporting the original men’s and women’s restroom signs, now serves as a VFW post. The clubhouse is for sale ($675,000) through Matthew Robosky of Coldwell Banker in Palm Springs.

Bodon was attracted to property that was part of the original 240 acres by Desert Hot Springs’ land prices, not B-Bar-H history. His goal was "to build cool houses."

Growing up in a midcentury modern classic Alexander home, Bodon always appreciated its architecture. Then, when planning to build homes in the desert five years ago, he lived near Donald Wexler’s steel "Case Study Homes" in north Palm Springs. "I was inspired by those," Bodon says.

Despite the popularity of midcentury modern architecture, the initial reaction to the Desert Hot Springs homes surprised him. At the Palm Springs Modernism Show two years ago, Modern Living Spaces ran a small ad in the program and handed out flyers at the door. "That weekend, we had 200 people come into the model," Bodon recalls, still sounding surprised, "and we couldn’t answer all the calls.

"Our first wave of people really got it because they were furniture collectors," he says. "You can’t put [modernism furniture] in a Victorian house."

About half the homes are built and occupied. Many buyers already resided in the Coachella Valley, and Bodon says most have at least one thing in common: "Almost everyone has an interest in design or architecture."