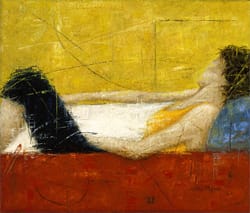 Erica Hopper paints the contradictory. Her knack for illuminating opposites — be they ideas and beliefs or colors and shapes — translates to visually powerful expression.

Add the sensation of traveling through layers, past obstacles, through the depths of a creative spirit where the journey is the destination, and Erica Hopper’s work becomes deeply provocative.

See, for example, her abstract diptych Distraction (2006). The muted shades of gray play like chess pieces with bursts of ochre against the white canvas. She embeds mystical spirals into straightforward crosshatching. Geometric divisions compound even less abstract pieces such as Just Arrived (2005), a painting slashed by shadow with a female figure walking past others down a street — a wondrous contrast of fluid brightness with dark shadow.

Always, there seems to be a gesture of motion, not only in the textured depth of pieces like Gainsbay Blue (2005), a globe-like canvas embedded with falling wishbones, but also in the more figurative M&M Debate (2005), Hopper’s take on formal political argument.

Hopper’s Wishbone series was inspired by her first Thanksgiving with husband Gary, a dentist. They carefully pulled the wishbone from a turkey carcass, cleaned it, and tucked it away. Years later, while rearranging their Rancho Mirage home, Hopper found a tiny box where she had secreted the wishbone. It rekindled happy memories and inspired a trio of oil paintings.

Her background includes fine art and graphic and custom textile design. She has worked in clothing, furniture, and textile production, owning a textile company for nearly 20 years.

Born in Kansas City, Mo., Hopper attended University of the Americas in Puebla, Mexico, and San Diego State University. She moved to the desert in 1987 and worked with interior designer Steve Chase.

Pointing to nature as her major inspiration, Hopper explains, “Each piece derives from a personal experience or insight or a dream. I try to paint aspects of emotions, desires, or part of the subconscious, what one would like to be or do.”

Erica Hopper’s work is exhibited at A Gallery Fine Art

This article was originally published December, 2006 and updated for the web June, 2007.