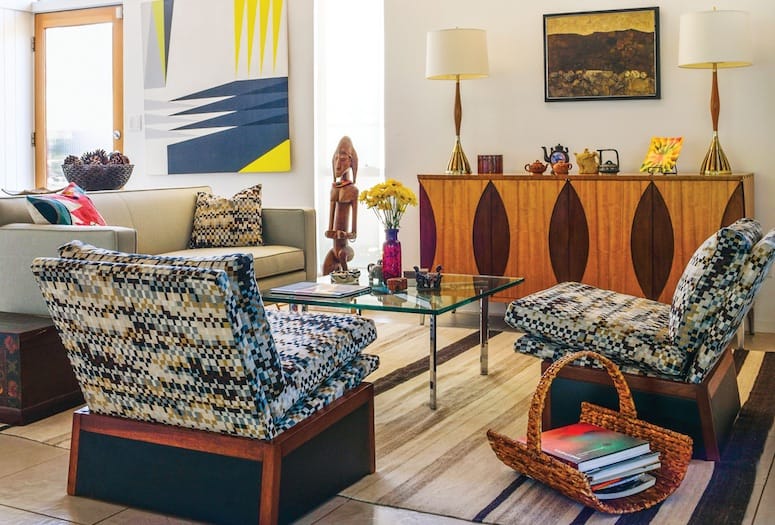 ”I’ve gone around the world and picked up little odds and ends from all over," says Florence Perchuk of he rh ome's collected look. Geometric artwork by Noel Martin; landscape buffet by Norman Zammitt.
PHOTOGRAPHS BY ANTHONY-MASTERSON

“I love a pop of yellow,” says designer Florence Perchuk, waving toward a tall arrangement of yellow daisies on a glass coffee table. “I will always have something yellow as the first thing people see when they come in. It just makes people happy.”

The color is as cheerful and uplifting as this heavy-hitting kitchen designer. And it’s a natural fit for Perchuk and her 2,200-square-foot home built in 1959 by the Alexander Construction Company, with additions made in 1996. From the pair of metal stools tucked under the kitchen island to splashes of the sunshine hue smiling from various artworks, yellow and Perchuk are inseparable.

For more than 25 years, Perchuk was principal and chief designer of Designs by Florence Perchuk, Ltd., and formerly served as president  of the Manhattan Chapter of the National Kitchen and Bath Association (NKBA). Widely published throughout her career, Perchuk teamed with many architects including Robert A.M. Stern and Michael Graves. Perchuk finished her own custom kitchen just before her 89th birthday.

“She is a wonderful client, and we really enjoy working together,” says David Dunn of PS212, the local showroom Perhcuk chose to help bring her kitchen to fruition. The two fellow New Yorkers hit it off from day one. “I was thrilled and honored that she chose to work with me, and it was a successful collaboration.”

Perchuk invited us in to learn more about her life, careers, and complete kitchen remodel.

So, you didn’t set out to be a designer?

No. As a young child, my parents discovered that I had a voice. When I was 10 years old, my mother took me to the Metropolitan Opera. I saw Lily Pons, who was exactly my size. I was mesmerized; I could not get over it. I said, “This is what I’m going to do.”

You became a singer?

I trained for the opera and did my graduate studies at Manhattan School of Music. I sang all over New York and had a business manager who placed me. Then, I had two kids, and he said, “The only future for you now is to go get the experience in Europe. I booked you on a series there where you’ll be the soloist.” With two babies at home, I couldn’t be gone for six months or a year, so I stayed local. I decided in my late 30s that it was time to think of a new career. I went back to school at New York School of Interior Design, and I took architectural courses at Parsons School of Design.

How did you end up in kitchen design?

In the 1970s in New York, they began to co-op the old buildings to save them. The first thing people wanted to redo was the kitchen. They didn’t teach me anything about kitchens in the design courses I took, but I was intrigued. A neighbor of mine decided to do her kitchen, and I volunteered to work with her, gratis. I researched appliances, found the cabinets and surfaces, and did everything I could think of to get all the things that you need to go into a kitchen. It was a learning process. 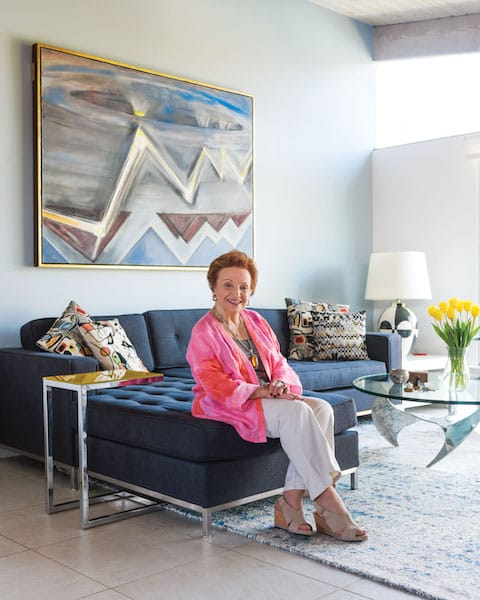 "I decided in my late 30s that it was time to think of a new career. I went back to school at New York School of Interior Design, and I took architectural courses at Parsons School of Design," says Florence Perchuk.

I went to work for the cabinet company that we found. They taught me all of the important factors about putting a kitchen together, how to organize it, what the rules were, basically. From there, I opened an office in my apartment, outgrew it within a year, and took over a showroom at Park Avenue and 59th Street. That was 1978. I made it into a place that professionals would come to because there was nothing like that. Even some of the most famous architects and designers came there because it was specifically for the trade. That’s how I really got my start.

Was there a pivotal moment?

When you’re invited to do the Kips Bay Decorator Show House, it’s such a prestigious experience. In 1996, [the show house] was published in something like 20 magazines. It went into Interior Design magazine, then House Beautiful, and it just went on and on and on. The New York Times wrote it up as well. That helped fuel a lot of things. 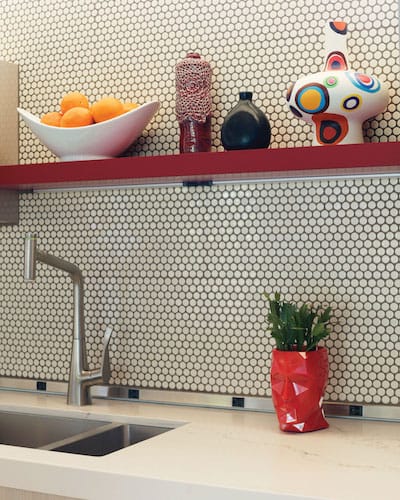 What a neat time to be up-and-coming!

Yes, the field was really developing. That was the most exciting part. New appliances were coming out, new cabinets and colors, and new technology along the way. Also, the fact that people were willing to spend the quantities of money involved. Very often, I would come into a home and say, “Let’s move the kitchen. It’s not working for you.” We couldn’t take the walls down, so that was the only way to get a bigger kitchen. We became known for being very creative and creating new kinds of looks. Today, the rules have changed enormously, and it’s much more difficult to be so creative. 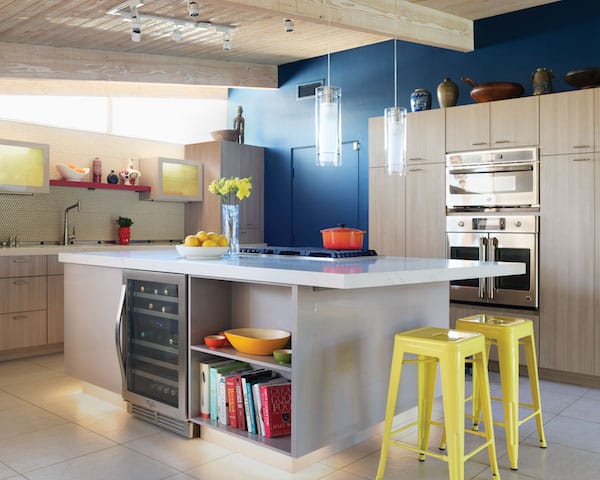 Who were your clients?

New York is such a small town. People don’t realize it. People get a sense of who you are, and what you are. My work became primarily referral. I would get one client, sometimes a law firm, and they would pass me on from one lawyer to the other one, one partner to another partner. I got a lot of calls from Hollywood. They would say, “So-and-so is coming into New York. They’d like you to look at the apartment. ” You have to really study the client to get solutions that work for them. And I was very fortunate; I had some very interesting clients.

You had said you learned the most from the architects?

I learned so much from how they saw a home or a project, looking through their eyes, and then incorporating my work with theirs. My sense, as a designer, is you never stop learning. You continue along the path. To this day, I’m still looking at everybody’s work and saying, “Yeah. I would do this.”

Is there a most memorable project?

The first kitchen I ever had photographed. It was the tiniest, narrowest kitchen imaginable. But it had one ingredient: a magnificent window at the end with a view of one of the oldest churches in New York. This was a young couple, newly married. What they wanted more than anything was to be able to dine in that galley kitchen, so I ended up moving the gas and water lines. The sink, dishwasher, refrigerator, and range moved to one side. On the other side, I mounted wall cabinets. Then, I put a platform in front of the window, and we found a tiny table and two tiny chairs. They were able to get it in under the budget, and it came out beautifully. They were so thrilled. And the editor managed to get a camera in and photograph it.

What was your last job?

I became the design consultant for the Electrolux Corporation in 2001. That was so exciting because we did shots for the catalogs, and we did the shows in Las Vegas. I did a design show house for them in New Jersey. It was a wonderful experience and a wonderful way to end my career. I left in 2007.

The house was built in 1959; I bought it in 2014. I had seen a lot of Alexanders, but this one I walked in and said, “Wow.” Plus, it had a fourth bedroom, which I wanted. (I have two grandchildren and two sons who visit.) I put a bid on it that same day. We did some minor things at first. But a home speaks to you. It really does, at least to me. Until I moved in and got the feel, I didn’t want to do any major renovations.

How did you approach the kitchen design?

I wanted to integrate the kitchen, so it didn’t overpower and you lose sight of everything else. It had to fit my thinking and also become part of the house. I like texture, and I like color — although I was known for my all-white kitchens. White is sharp. It’s always clean, and it always feels good. But taupe is also a neutral color. It blends in more and is more forgiving. I redesigned everything. There’s nothing here that was there before.

What did you locally source?

In 2018, I found David Dunn at PS212. He’s an architect and was so helpful. In putting together the cabinets, countertops, and appliances, collaborating with David made a tremendous difference. I can’t recommend him enough, because he sees it from a design point of view. There’s so much he can add.

I love the faux marble island. Its angled edge echoes the shape of the window and the slant of the beams. And I love my wall oven. The top is convection; the oven below is electric. With the industrial outlet, you can plug in anywhere and it gives you another work area. I hate looking at outlets. 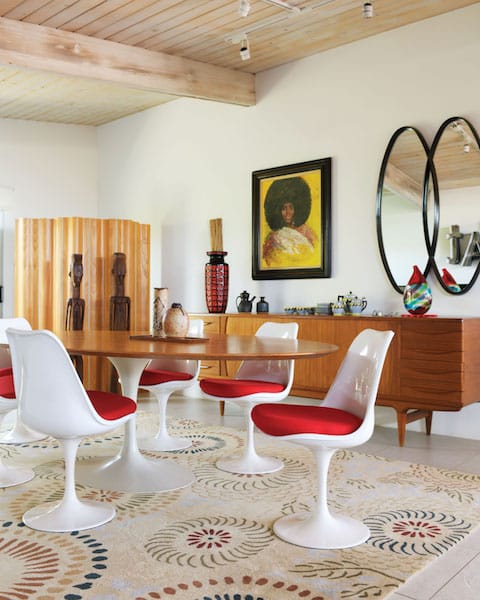 Florence Perchuk’s signature pop of yellow continues through a portrait by Purvis Young in the dining area. Vintage furnishings, including the Danish credenza and the original Eero Saarinen wood dining table, span the 1950s, ’60s, and ’70s, joining personal objects she brought from New York.

Lighting to me is one of the most important things. I’m trying to educate people that we all grow older. It’s a very smart thing to have lights under the island in terms of aging in place.

Do you do a lot of cooking?

I used to. In Palm Springs, I’m out all the time. I don’t do that much cooking. Let’s face it. I cook three or four days a week. And that’s plenty.

• READ NEXT: A Family of Four Finds an Architectural Home  and its Palm Springs Setting Suits Their Evolving Needs.