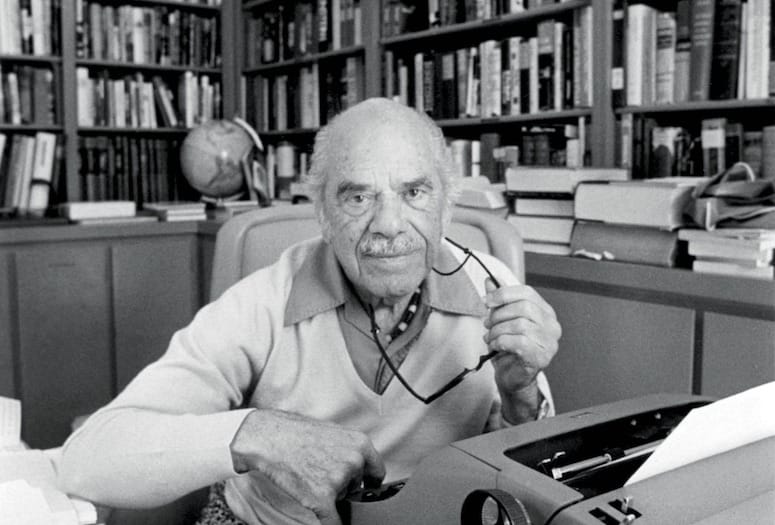 Frank Capra loved the Coachella Valley, often referring to the area as "lucky" and wrote many of his screenplays here.
PHOTOGRAPHS BY BIANCA BAYARDO

Frank Capra’s 1946 It’s a Wonderful Life is a veritable holiday classic, the story of troubled George Bailey (Jimmy Stewart), a man determined to end his life until a guardian angel intervenes on Christmas Eve and shows Bailey the impact he has had on the world.

Had the camera pulled back a little more, it would show that Bedford Falls was really a four-acre lot at RKO’s ranch in Encino. The film was shot during a summer heat wave, so the sweat on Stewart’s desperate face was real. The gentle snow that fell on the picturesque town was a mixture of soap, potato flakes, and fire-extinguishing foam.

And some of the film’s most pivotal scenes might have been conjured right here in the Coachella Valley, brought to life among the sun-dappled mountains and fragrant orange blossoms of La Quinta Resort & Club.

It’s no secret that the Academy Award winner loved the Coachella Valley. Capra often referred to this area as “lucky” and wrote many of his screenplays here. After leaving Hollywood, he retired to an A. Quincy Jones-designed home at La Quinta Country Club, where he remained until his death in 1991. He is buried in Coachella Valley Public Cemetery.

Capra’s love affair with the desert spanned many decades, beginning in 1933, when he stayed at Nellie Coffman’s Desert Inn in Palm Springs and penned his first big hit, Lady for a Day. 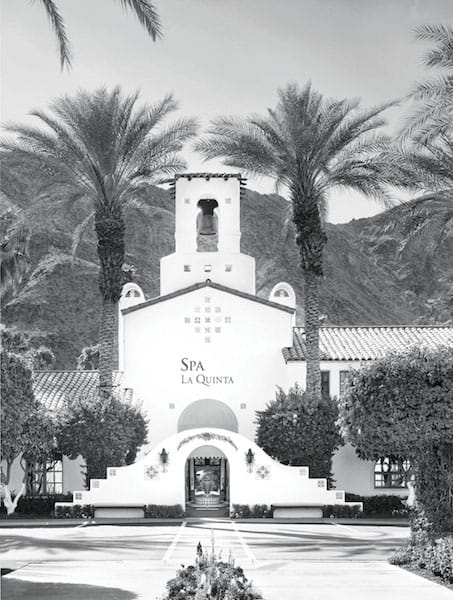 He returned to Palm Springs in 1934, determined to strike gold again. And he did, almost purely by happenstance. While waiting at a barbershop in Palm Springs, Capra flipped through a Cosmopolitan magazine and read the short story “Night Bus.” The piece immediately ignited something in him.

“It had the smell of novelty,” he recalled about the short story in his 1971 autobiography The Name Above the Title.

• READ NEXT: Explore La Quinta and Its Attractions. 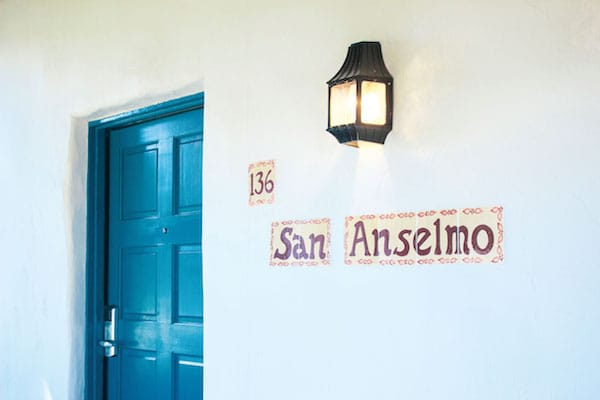 After the studio secured the rights, Capra transformed “Night Bus” into It Happened One Night starring Clark Gable and Claudette Colbert. The film swept the Academy Awards, winning all five awards for which it had been nominated — including best picture and best director for Capra — and his superstitions about this lucky area were confirmed. 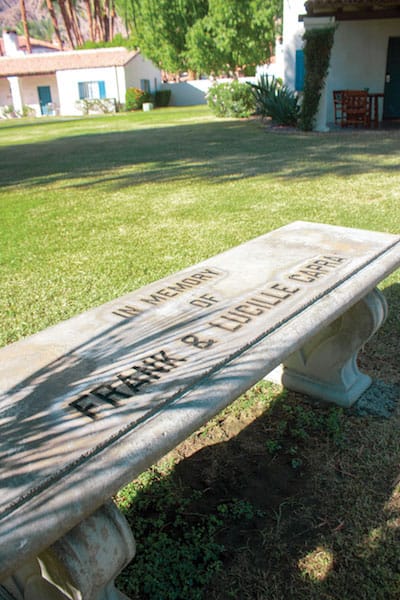 “There wasn’t much he didn’t like about the Coachella Valley,” says George Morgan, who wrote the play Closing Credits: An Evening with Frank Capra and has extensively studied the director’s life. “He liked the swimming pools. He liked to sit out at a table in a lawn chair with a cold drink and write, while the kids splashed around in the swimming pool. He was also superstitious. So if something worked once, he was willing to do it again.”

Though Capra stayed for brief weekends at the Desert Inn, the legendary director and writer turned to La Quinta Hotel (now the La Quinta Resort & Club) for extended stays with his family. 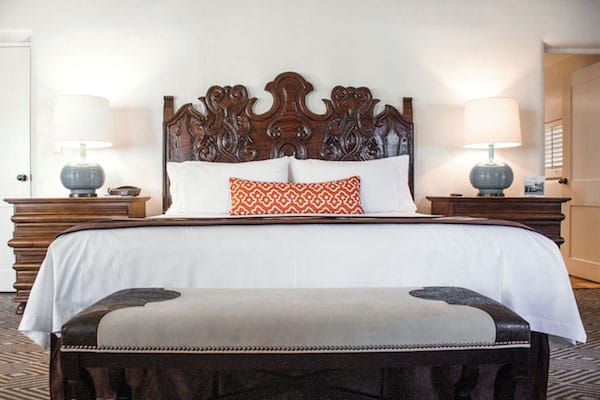 As Capra recounted in his autobiography: “We rented a red-tiled adobe cottage at the La Quinta Hotel, a cool-green oasis nestled between the rocky roots of Santa Rosa Mountain, where they plunge — bare and pink — under the hot white waves of the desert sand dunes. This inviting spa, near Indio, was to be our Shangri-La for script-writing in the coming years.”

That adobe cottage is where his ideas for cinematic classics blossomed, from the idealistic Mr. Smith Goes to Washington to You Can’t Take It With You and Mr. Deeds Goes to Town. 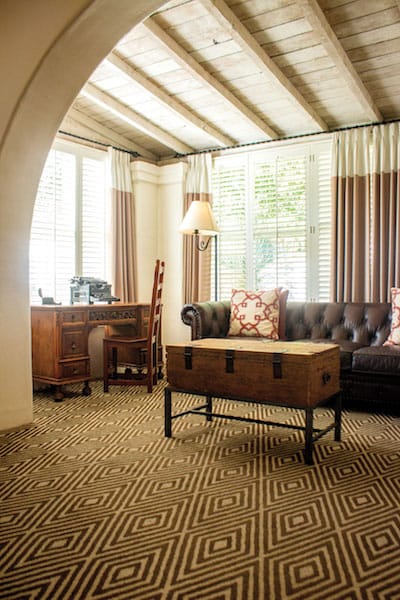 In his autobiography, Capra referred to the resort as his Shangri-La for script-writing.

It’s easy to see why Capra found inspiration in that space. The place is larger than most of the other casitas of that era. There’s a separate sitting area with a desk and typewriter, and the window above the desk looks out into a gentle, grassy area of the resort. The casita also has a wood-burning fireplace, surrounded by hand-painted tiles. Walk out to the patio to gaze at the nearby rose garden.

For a while, Capra lived at the resort full time and became the unofficial greeter of the property, according to Taylor Thompson, a spokesperson for the hotel.

It’s unknown how much of It’s a Wonderful Life Capra penned at the resort. However, here’s what we do know: The film is an adaptation of “The Greatest Gift,” a 4,000-word short story, written by historian and editor Philip Van Doren Stern. Unable to find a publisher, Stern self-printed 200 copies of the piece and mailed them out as Christmas cards. One of those cards ended up at RKO Pictures, where the studio bought the rights and spent a fortune on screenplays that didn’t quite work. 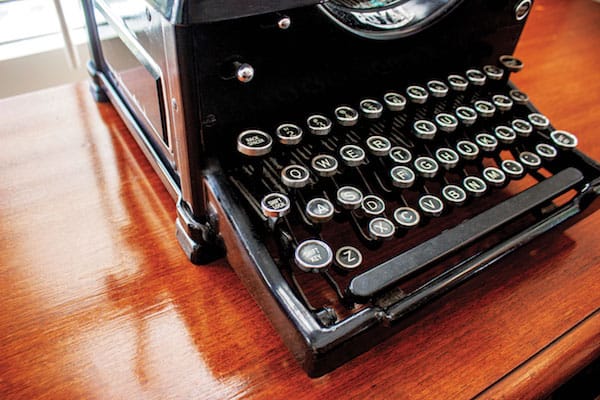 Frank Capra found inspiration for his cinematic classics in a red-tiled adobe cottage at what is now La Quinta Resort & Club.

When Capra — then at the helm of his own motion picture company — bought the rights, he inherited those scripts from Dalton Trumbo, Marc Connelly, and Clifford Odets. Capra scrapped most of their work, tackling the story with Frances Goodrich and Albert Hackett (a screenwriting husband-and-wife duo), and then worked on it with their friend Jo Swerling. He brought Dorothy Parker on board to polish it. Finally, he wrote integral scenes for the film himself. Chances are he did that right here.

“It would not surprise me if those scenes were written in La Quinta,” Morgan says. “This was his favorite place to write.”