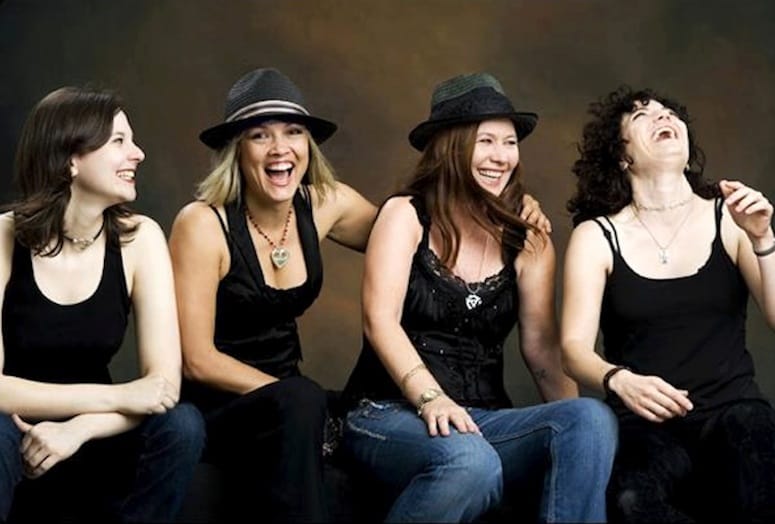 Former Go-Go’s bassist Kathy Valentine is writing a new chapter in her life.

Literally, Valentine has returned to college to study Fine Arts as an English major. She has penned music reviews online for Talk House and hopes to write a screenplay.

Valentine (pictured at right) sat down with Palm Springs Life to talk about The BlueBonnets.

How did the BlueBonnets become a band?
“The early version of the BlueBonnets started in 2002, in Los Angeles when Dominique [Davalos], who is the bass player, and I, just started a band like our favorites, the Stones or The Beatles did. We started the band based on blues music. Then years later, I moved to Austin, and then Dominique did, and so we re-started the band again in 2008. We’ve been together for around five years now with our current lineup of myself, Dominique, Eve Monsees, and Kristy McInnis.”

If Davalos plays Bass, what instrument do you play in the band?
“It’s kind of the irony of my life because I was known for being the bass player in the Go-Go's. Guitar is my main instrument. I love being able to play bass in the right spots and have enjoyed it, but I play guitar in The BlueBonnets.”

You co-wrote a few Go-Go’s songs. What is your writing process with this group?
“We bring ideas in and we all work on them together. There’s no rules. We just try to keep generating fresh material and keep adding it to the set. We have enough songs that we feel comfortable playing with and changing in our shows. As a writer, I feel I always have my antennae out. Inspiration comes from thin air and sometimes putting my head down and saying ‘Hey muse, I’m here.’”

Are you working on new songs?
“We have enough new material for our next album, but we feel this one,  Boom Boom Boom Boom, you know like the John Lee Hooker song, it’s still got some legs on it.”

You also write music reviews and screenplays?
“I’ve done a music review for Michael Azerrad, who runs the website Talk House. I really enjoyed writing for them. I’m working on a memoir and I’d like to write a few screenplays. There are a few stories that need to get out.”

Have you been out to the desert?
“I’ve played out there with the Go-Go’s for private performances and at the Civic Center [in Palm Desert]. I’ve also played there with The Delphines, a band I was in with Dominique many years ago. LA is great because you can drive a couple hours and just get away to a change of scenery. I loved going out there to get a shift in perspective.”