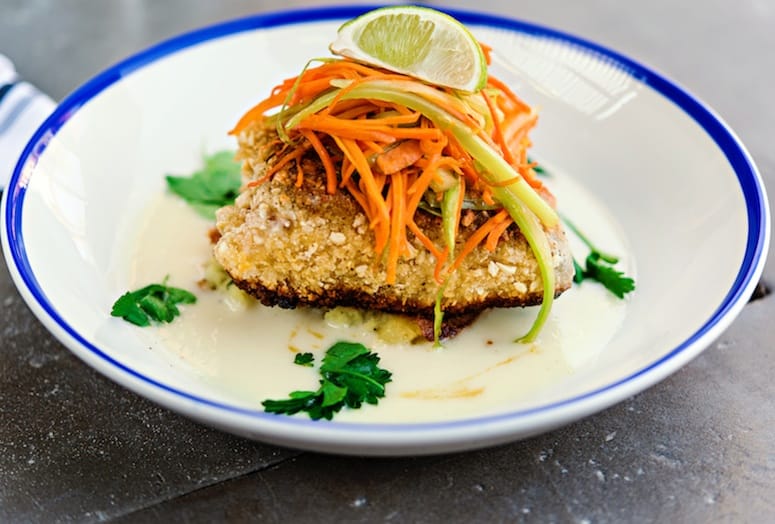 Cashew Encrusted Seabass, served over a scallion pancake and a coconut habanero beurre blanc, is new to the menu.

ARRIVE hotel might still be in its infancy, but big changes are underway with the introduction of Carmen Rodriguez, the new head chef at the hotel’s restaurant, Reservoir. With his mastery of an innovative Latin-esque cuisine and decades of experience, Rodriguez has overhauled the menu to what he believes adds “a little more flair, a lot more flavor, and imagination beyond bounds.”

Although Rodriguez describes himself as a “simple eater, satisfied with rice and beans,” he certainly is no simple chef. “The owners are allowing me to do things that I want to do,” he says. “I don’t want to be some big ego dictating the type of food here, though.”

Coming from a migrant family, Rodriguez technically has been in the food business his entire life. He began as a little babe, bundled and bound to his grandmother as she worked the fields in California. As he grew, so did his curiosity about and love for fresh ingredients. His earliest memories are about running through the fields plucking and sampling the crops.

Later, Rodriguez hit a rough patch navigating the streets of Chicago. His path changed for good, however, when he was 14 and found a mentor in a Chicago kitchen.

“He taught me the business of restaurants. He didn’t teach me how to cook,” says Rodriguez. “From there I was able to apprentice at The Ritz-Carlton Water Tower in Chicago, learning more cooking technique.” 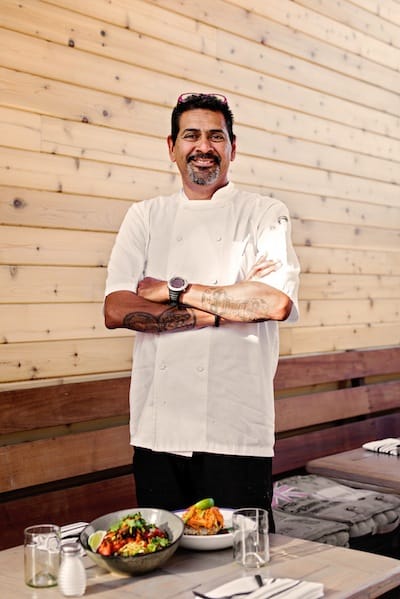 A stint in the military followed, giving him the opportunity to volunteer on his free time as an apprentice in kitchens in every country where he was stationed, from Greece to Japan. “I was able to get true flavors of the cuisines in each country I went to, because at the end of the day, my payment was a meal — what chef would make for the kitchen staff, not what was on the menu,” he says.

Rodriguez’s true culinary calling, “global Latin cuisine,” came as an epiphany more than a decade ago. “I was in Toronto working with a friend and chef from Kenya,” he says. “I was there to teach him about New Mexican cuisine while he was teaching me about African [cuisine]. He kept telling me all day that he was going to ‘take me home for dinner.’ We ended up at this little Ethiopian restaurant and I said, ‘I thought we were going home for dinner’ and he said, ‘we are home.’ Everything that I tried in the restaurant was the mother of all the ingredients that is Latin cuisine. The chilies, the spices, the flavorings and the techniques … It was an eye-opening experience for me.” 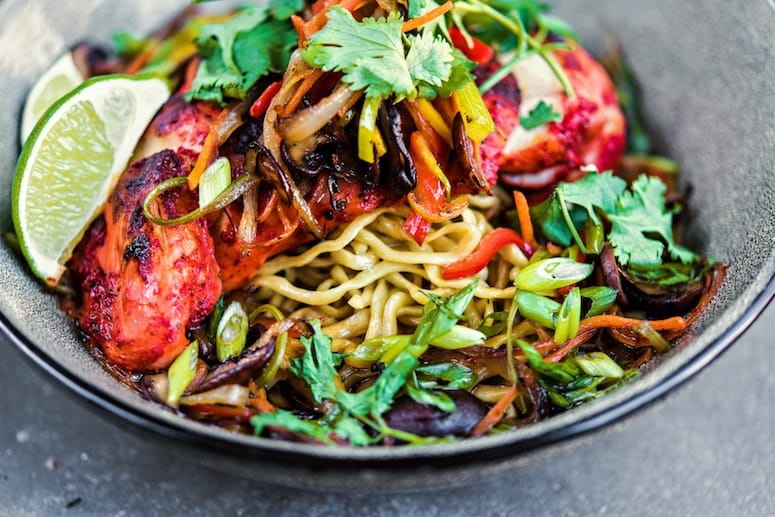 New to the menu, Achiote Chicken Ramen Bowl, a Mexican-Japanese fusion, also is a newcomer to Reservoir.

Rodriguez hopes to create an equally authentic experience for Reservoir customers with lobal Latin dishes like Achiote Chicken Ramen Bowl, a Mexican-Japanese fusion. The marinated chicken and traditional ramen noodles are a beautiful marriage between the two cuisines, but the rich and toasty broth, for me, is the star. Simmered for eight hours, the flavors of chicken thighs, coriander, toasted cumin seed, and Sichuan peppercorns create a broth unlike any ramen dish I have had.

Another global mashup, the Cashew Encrusted Sea Bass, served over a scallion pancake and a pool of coconut habanero beurre blanc, will dazzle your tastebuds. Inspired by the flavors of Cuba and Thailand, Rodriguez says, “This dish is a favorite of mine that has been with me for years.” The nutty, crispy coating on the delicate fish, paired with the bright scallion pancake and the spicy sauce is perfection.

Some original Reservoir dishes will remain the same, especially on the breakfast menu — although you should expect some fun brunch items as well, such as Fried Chicken and Churros and Cap’n Crunch French Toast. The bright, summery taco menu will stay, with the addition of a “Tako Taco” (“tako” is octopus) featuring a housemade kimchi slaw, another play on Mexico meets Japan. 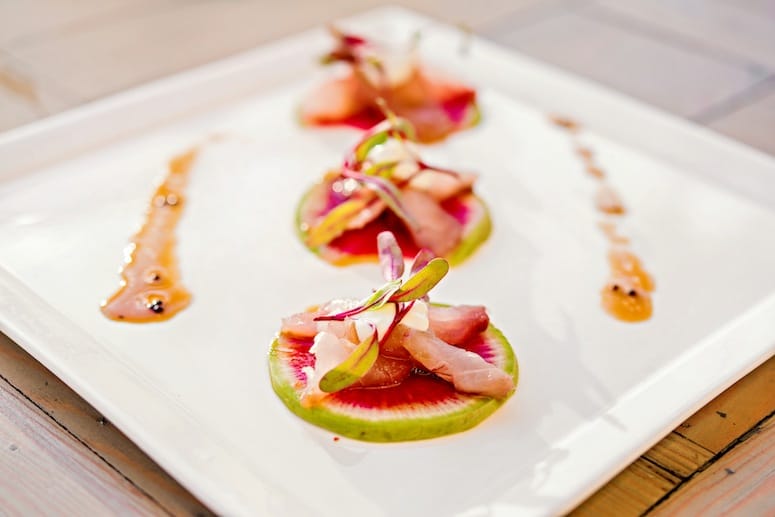 ” What I loved about ARRIVE when I interviewed [for the job] was the fact that it’s here for the community,” he says. “It’s having fun, being focused, and doing something different. That is my goal — to bring something unique to the desert and to all of Southern California.”