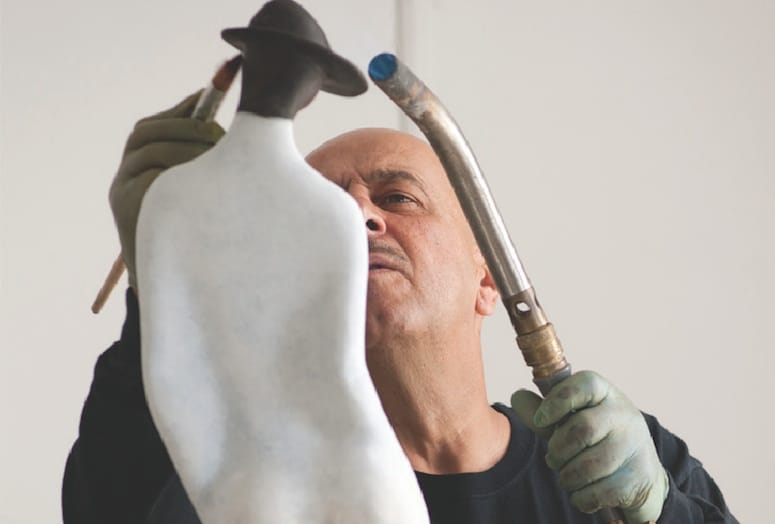 Growing up in Columbia, the youngest of 20 children, Guilloume Perez- Zapata enjoyed the love, joy, and commitment found in his large family.

He says his mother inspired her children to value the beauty of feeling for family and friends and she said, “Everything is possible. Shoot for the moon. It doesn’t matter if you hit your neighbor’s cows. Shoot high.” Guilloume took that advice and has achieved phenomenal success as an award winning minimalist artist and self-described master of "Bolismo.”

His highly respected works as a painter and sculptor utilize the concept of creation via circles, “Bolismo.”  Guilloume says his technique is “based upon simplicity. It’s minimalist with not too many elements.”

One of Guilloume’s pieces, “In Prayer,” (pictured above) has been chosen to represent the 33rd annual La Quinta Arts Festival, March 5-8, at the La Quinta Civic Center Park adjacent to Old Town La Quinta.

This award-winning event is one of Coachella Valley’s premier attractions welcoming arts enthusiasts as well as world-class artists from both near and far. The festivities take place and include live entertainment, food, and refreshments. Guests can visit the many artisan booths while wandering amidst the venue’s water features, grassy knolls, and shade trees.

Guilloume, who also serves as a juror and one of the 12 Apostle Artist Advisors says, “I feel very honored. We are going to have a wonderful show…the best year ever in one of the most beautiful set ups I’ve ever seen.  It’s fantastic.”

Guilloume says his painting “In Prayer” was inspired by sitting at the dining table. Guilloume at work in his Maryland gallery.

“We come together to pray for everyone especially for the ones that need our prayers,” he says. “It’s the best way to show our gratitude for the miracle of life and the many blessings we have. In prayer, I find a way to see the positive and be grateful for what we have…not for what we don’t have.”

According to Christi Salamone, executive director of the La Quinta Arts Foundation, “His image ‘In Prayer’ was selected for the La Quinta Arts Festival’s 2015 poster, as we felt it portrayed our sentiment of gratefulness for being named the No. 1 Fine Art Festival in the nation for three consecutive years (by Art Fair SourceBook).”