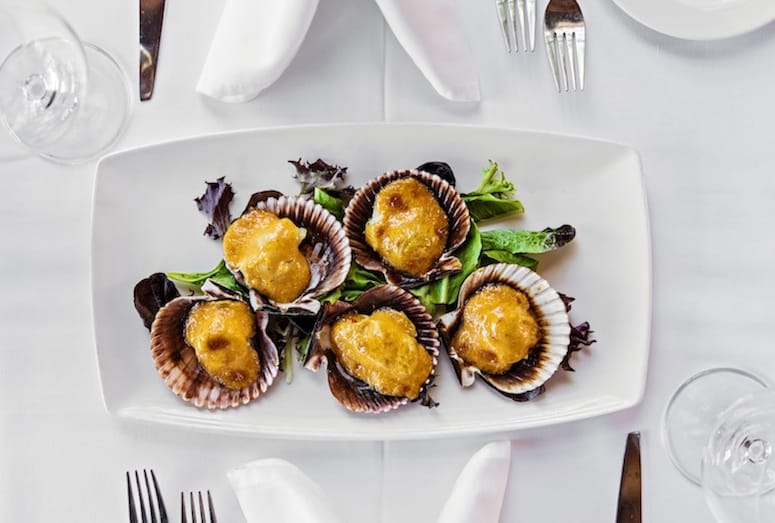 Start your meal with a shareable appetizer like the Baked Scallops on the Half Shell in a spicy cream sauce.
PHOTOS BY SARAH HUSVAR

Suspended in the side of historic Point Happy with a 180 degree view of the Coachella Valley, it’s not difficult to see why the La Quinta Cliffhouse made Gayot’s 2016 Top 10 Romantic Restaurants in the Palm Springs Area.

The relaxed ambiance extends to an outside patio that’s set against the cliff’s bare rock face and lit at night by an outside stone fireplace and soft overhead bulbs. The classic Spanish ranch architecture creates a relaxed and homey atmosphere.

La Quinta Cliffhouse, built into the side of historic Point Happy.

TS Restaurants selected a remote, undeveloped, and nearly inaccessible location on the side of a mountain for their restaurant. La Quinta has since grown around the restaurant, giving the notion that Cliffhouse has been an intrinsic part of its expansion.

This La Quinta destination is part of the Greater Palm Springs Restaurant Week, which began June 3 and runs through June 12.

Cliffhouse’s Pan Roasted Chilean Sea Bass with a honey soy glaze is one of their most popular dishes.

Chef Kelly is unable to define his menu as single cuisine but rather a melting pot of influences from around the globe. With a focus on fresh, flavorful seafood dishes, Cliffhouse’s menu is more like one you’d be expecting to read with waves crashing fifty yards away and seagulls nose diving into your bread basket. Chef Kelly suggests beginning your meal with a shareable appetizer like the Baked Scallops on the half shell. These gorgeous scallops are served up with melted leeks, spinach, and a smothering of spicy cream sauce.

While the salmon dishes are a hot item at all Pacifica restaurants, one of the most popular entrees at Cliffhouse is the Pan Roasted Chilean Sea Bass with a honey soy glaze. Served with sticky rice, bok choy, and a dynamic green curry-coconut sauce, this dish fulfills the promise inherent in the much ballyhooed label of Pan Pacific cuisine.

Therefore, it’s curious that one of the biggest culinary draws to Cliffhouse is Tuesday Taco Night. Even on the slowest Tuesday, the bar and patio are packed with patrons with a hankering for fish tacos and Cadillac margaritas. The Tuesday fare has become so popular that the restaurant added “Taco Tuesday…on Thursday”.

Waterfalls add to the relaxed ambiance on the beautiful property in La Quinta.

Patio dining with mountain views at Cliffhouse in La Quinta.