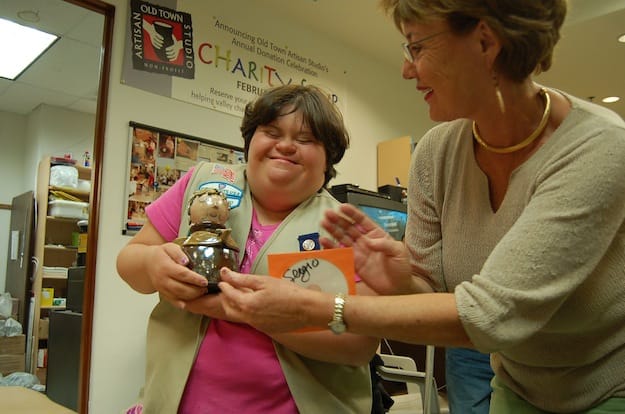 At age seven, Victory Grund had to put away her ballet shoes after being stricken with polio.

In bed with rheumatic fever, Grund was confined and tutored at home with books projected on the ceiling. At one point, Grund’s image graced the March of Dimes polio child racetrack photo.

As she struggled to find her legs again, Grund found it very difficult to fit in.

“In a world where so much emphasis is placed on sports, I grew up as the child that was either left out or the last person picked on the team,” Victory said.

Sculpting and modeling in clay became an outlet where Grund’s disability didn’t matter.

“To create is healing,” Grund said. “It is the joy of the hands-on process. It is touching the clay and watching it change. To see the beauty in something you’ve made and feeling pride when others exclaim ‘Wow, you made that!’ is so empowering.”

Grund learned to walk again, but her witness to the power of healing through art never left her and eventually became her passion.

“My heart is so full of the personal healing I have experienced being introduced to art, I want to share it with others” she said.

Grund’s dream to empower others by making art accessible to all ages and abilities has been realized in the development of Old Town Artisan Studio in La Quinta, which she founded in 2008. Through her philanthropic efforts, the studio now shares the gift of art across the Coachella Valley.

According to Grund, “our studio specializes in the mediums of clay and glass because these art forms are healing and a means of expression for mankind. In every culture of the world, art carries messages to all who share it.”

While the price of each class varies, guests can also register for special sessions in ceramic painting, kids camps or hold their birthday parties and social events at the studio.

Open to the public, each paid class or session helps to offset the cost of free classes for children and adults with special needs. The studio creates partnerships with other charitable groups in the community by offering free classes for organizations such as Coachella Valley Boys and Girls Clubs, Salvation Amry, the Braille Institute to name a few.

The success of the studio’s programs has gained the attention of the local chapter of the National League of American Pen Women, a society dedicated to encouraging activities supporting Arts, Letters, and Music.

Grund will be honored April 7 at a special luncheon aptly named, “Women of Distinction in the Arts”, for her outstanding contribution to the arts in Coachella Valley. The League’s event also honors local patrons Joyce Bulifant and Daniela Ryan, and will raise funds for scholarships for high school graduates who are pursing an education in the arts.

“This honor is thrilling and humbling”, Victory said. “Throughout my life when there have been hardships, I have been comforted by the belief that art can free the soul. No matter the physical, emotional or financial challenge, people can be healed and changed when they can create something from their hearts and imagination. “

Following this prestigious award, Grund will be busy chairing  “Carts for Art”, a golf charity event hosted at Mountain View Country Club on April 15.  Proceeds will go toward underwriting studio classes for those with special needs.  Future fundraising goals include the purchase of a vehicle so that OTAS can go mobile.

“At a time when the arts are being pulled from schools, OTAS can fill a void,” Grund said. “Some people dream of getting a Ferrari but I dream about a bread truck. Instead of loaves, we would fill the truck with kilns and glazes to take classes to hundreds of students.”

For more information on OTAS or the “Carts for Art” golf tournament, visit www.oldtownartisanstudio.org.