Annenbergs’ art collection, Home Is Where The Art Is 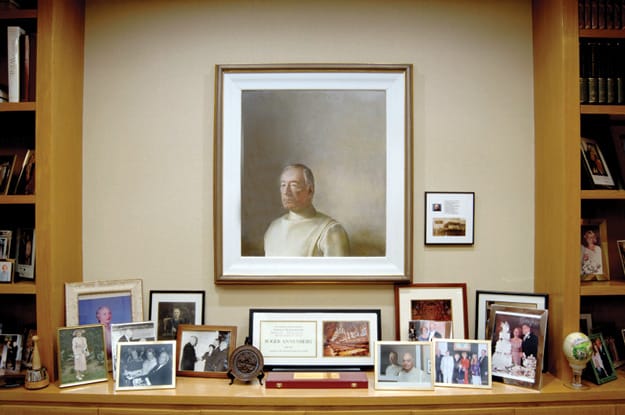 The depth and sophistication of the Annenbergs’ art collection became ever clear in the 1990s, when its heart and soul — the Impressionist and post-Impressionist works — departed Sunnylands in Rancho Mirage for New York’s Metropolitan Museum of Art. Remaining at the Rancho Mirage estate was an impressive collection of modern sculpture — ranging from Auguste Rodin’s Eternal Spring and Alberto Giacometti’s Bust of Diego on Stele III to kinetic works by Yaacov Agam and Harry Bertoia, as well as canvases and works on paper by 19th and 20th century artists, including Andrew Wyeth and Pablo Picasso.

Wyeth’s 1978 portrait of Walter Annenberg and Rembrandt Peale’s Portrait of George Washington (1859) remain in the Room of Memories at Sunnylands, symbolic of both subjects’ commitment to leadership and public service that would strengthen America.

Other significant works include Picasso’s 1959 Picador on Horseback, one of the artist’s many bullfighting-themed works on paper; the 1977 paper collage Roots by Romare Bearden; and, in the master suite, the colorful, 1952 abstract painting L’Enfant au Biberon (Infant with Baby Bottle), by French artist Jacques Villon.

“At Sunnylands, we enjoy primarily selections that were destined for Sunnylands or acquired after taking residence, but also some aspects of the collections that they began to articulate prior to their arrival here,” says Anne Rowe, director of collections and exhibitions at the estate. “From very early on, the Annenbergs had an eye toward providing public access to Sunnylands and the fine art and decorative arts collections.”

In 1976, Walter Annenberg wrote, “Ultimately, Sunnylands will be turned over to the public, and I naturally take care in the selection of acquisitions for this long-range responsibility.”

The collections at Sunnylands — which also include Steuben glass, Chinese antiquities, and important silver gilt — exude aesthetic and academic richness and integrity. “The Annenbergs were sharp, intuitive collectors,” says Rowe, adding that she found no evidence of the couple buying pieces for investment purposes. “They had the ability and discipline to understand a variety of genres and spot the ‘best in class’ across mediums. Also, they collected works of art that pleased them and that they wanted to live with, so there is some sense of overall continuity of taste and quality that pervades the thematic tones.

“It’s also interesting to note that they made purchasing decisions jointly,” she continues. “For instance, Walter wrote to the seller of Harry Bertoia’s kinetic sculpture Peacock in 1967:

“Lee and I will be returning to Philadelphia … We would be delighted to have another look at this excellent piece in order that we might make a final decision concerning a home for this most interesting art expression. With all good wishes, sincerely, Walter Annenberg.”

Travel inspired many of their purchases, including the 1976 Henry Hunt totem pole restored last spring by Hunt’s son, Stanley, and grandson, Jason. It remains on the golf course. Other artworks — including sculptures by Giacometti, Rodin, Agam, and Jean Arp — were reinstalled in the new Annenberg Center at Sunnylands, which will open in November for public tours.

Rowe, who is cataloging the collections, enjoys reading through the correspondence associated with the art. One file, she says, “informs us that the Annenbergs purchased two of their Arps directly from the artist himself in 1956 — both pieces commissioned especially for them.” These include a small white marble, Torse (Torso), and the bronze relief Configuration: Souvenir d’Athenes. “Both pieces are biomorphic in nature and really demonstrate how the Annenbergs sought out work from the artists whom they admired, how cutting edge they were in their choices, and how good their eye was for identifying important works ahead of the curve.

“We see through the paper trails that their interest in the modern sculpture arena never waned, and indeed only accelerated over time, resulting in an important, tightly conceived modern sculpture collection,” Rowe says. “We know that the Annenbergs purchased the property that would become Sunnylands in 1963, so we can speculate that these modern works were more than likely destined for the future Sunnylands estate rather than their home in Pennsylvania, which featured more traditional artworks.”

Two works intended for Sunnylands are Rodin’s Eve and Eternal Spring, which the Annenbergs purchased on the same day in 1967 from Wildenstein Gallery in New York. Eve is a focal point in the atrium at the residence; Eternal Spring graces the visitor center.

The Impressionist and post-Impressionist works donated to the Met were replaced with high-quality digital reproductions — in frames made to replicate the originals. “Because the paintings had such a presence in the home,” Rowe says, “the ambassador and Mrs. Annenberg couldn’t conceive of the public accessing the house without understanding how the paintings were installed.”