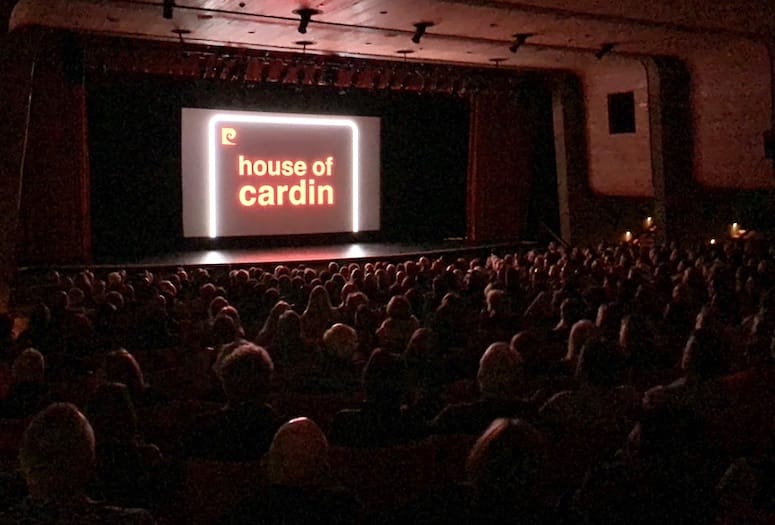 Since the shutdown in March due to the pandemic, the idea of showing the film to a packed house indoors just isn’t in the cards right now.
PHOTOGRAPHS COURTESY THE EBERSOLE HUGHES COMPANY

Their documentary, House of Cardin about fashion guru Pierre Cardin, was screening in their own back yard to sold-out audiences at the Palm Springs International Film Festival. “We got so embraced by our hometown,” Hughes recalls. “The Uber drivers were recognizing us. So it was very fun. It was a big thrill.”

• VIDEO: View the Q&A After the  Screening at the Palm Springs International Film Festival.

An additional screening followed during Modernism Week in February where members of the Cardin family (not including the then 97-year-old Cardin) appeared. “Everyone showed up dressing up. Everyone showed up in the spirit. It was just really a blast,” Ebersole says. Adds Hughes, “It was the happiest time of my life.”

Then the shutdown came in March. It was like someone turned the spotlight off and kept it off. The coronavirus pandemic took center stage and the couple’s hopes to take the film to 20+ festivals shrunk to a few that carried on virtually.

• READ NEXT: Discover the Inspiration for Why Ebersole and Hughes Made the Documentary.

And this month would have been the film’s theatrical release in 10 major U.S. cities and then nationwide. The U.S. release is still happening, just not in theaters. House of Cardin is screening in theaters now in Australia and New Zealand. Originally set to stream in late fall, the date has been moved up to Sept. 15, Ebersole says. 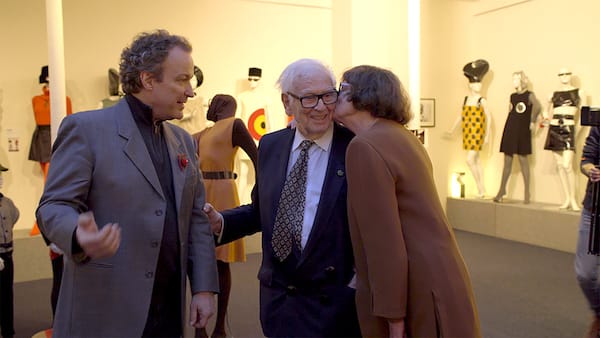 Pierre Cardin (center) is greeted by exectuive producer Matthew Gonder and Renee Taponier from the film, House of Cardin.

Ebersole and Hughes chat with Palm Springs Life about a recently released campaign for the film. They also have another Palm Springs screening in the works (no date confirmed), so if you missed seeing the film locally the first time, you should have a chance to do so this fall.

How has the pandemic impacted the theatrical release of the film?

Ebersole: Normally, you do a theatrical release to get word of mouth going about the film, and everybody ends up watching it on streaming or DVD at home. And so now we’re sort of forgoing that step of it actually being in theaters. We went to see the Linda Ronstadt documentary. We’re fans, so we go, we got ourselves out of our house over to see that documentary over in Palm Desert, and there’s two people in the theater. We went to see Echo in the Canyons; same thing. So we know what it’s like out there right now trying to sell theatrical without COVID.

Are there plans for an event in New York?

Ebersole: Rooftop Films in New York and The Met are talking about teaming up to present the film in a kind of one night only special event to align with New York Fashion Week (set for Sept. 11-16), which will also basically be virtual this year.

And one in Paris with Cardin in attendance? 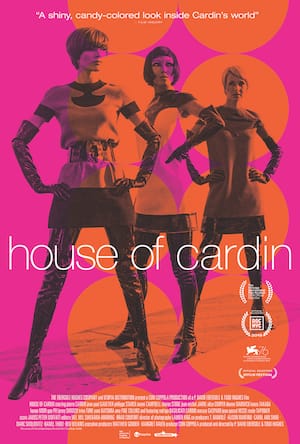 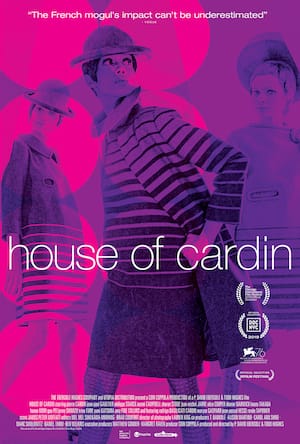 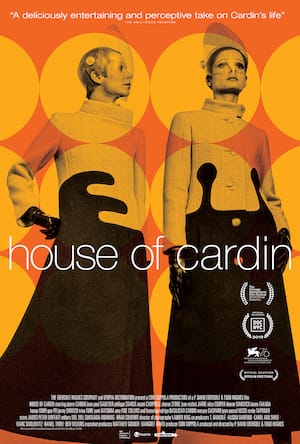 Palm Springs designer Tom Dolle created these posters for the nationwide release of House of Cardin.

Just last week, Vogue magazine released a new set of posters for the film by Palm Springs designer Tom Dolle along with a new trailer. How did you connect with Tom?

Hughes: We actually met during Modernism Week. He came on a tour of our home. And then he drove by in this Cadillac and gave us an 8-track tape and we became friends. We were dying to work with him. We found out Tom is the genius behind Destination PSP design.

Ebersole: Destination PSP was looking for something from the Palm Springs International Film Festival and Modernism Week that they could turn into kind of their annual art work approach. And they said Pierre Cardin is such a great choice. And from that grew the Modernism Week poster that they did as a limited edition. And then our distributors saw that poster and said, “Can we do a treatment with this artist? These are beautiful.” And so that’s how it came to be. And they hired him because they loved the work that he did.

Given everything you have been through with this film, do you still take a moment and look at each other and say, “Did we really do this?”

Hughes: Every single day. Seriously. What luck, right? That we got to travel around the world, meet all those people. It was really incredible. It makes you appreciate it even more what’s happened now.

Ebersole: We traveled the world with this film, and we got to do all of the amazing preliminary exposure. Like at the Venice Film Festival, Mr. Cardin actually was there in attendance to see his standing ovation. I mean, you know? It just gives you goosebumps to think about the fact that we provided that for him. It’s amazing.

VIDEO: View the new trailer for House of Cardin.