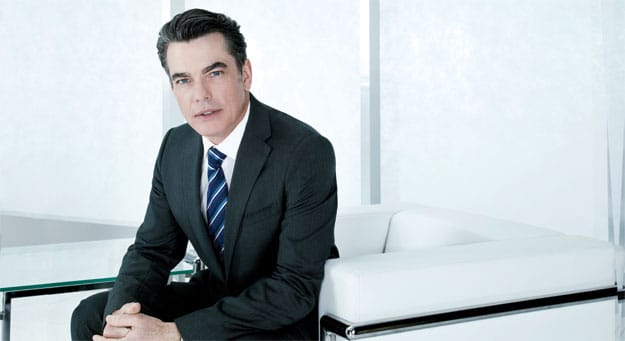 On an impulse, Peter Gallagher and his wife, Paula Harwood, bought a 1971 Mercedes they saw for sale on the side of a road in Palm Springs in 1990. They had been staying at Two Bunch Palms only four weeks before the birth of their first child, James, and were on their way home. They needed a second car, and it had to be safe enough to carry their soon-to-be newborn.

“Years later,” Gallagher says, “when Kaye Ballard and I did an Actors Fund Concert in New York together, she spoke so lovingly about her home in the desert that we decided to bring the kids [Kathryn and James, now both college students] out and do the tourist thing, ride the tram, hike through the Indian Canyons, and eat great food!” In ensuing years, he has visited the desert to play in celebrity golf tournaments.

His connections to Palm Springs and The Actors Fund come together on Feb. 11, 2012, when he receives the Steve Chase Humanitarian Award for Pioneer Arts & Activism at Desert AIDS Project’s annual fundraising gala. Gallagher has been an active supporter of The Actors Fund for many years, and he serves as co-chair of its National Board of Advisors. Among the fund’s services and programs available to entertainers is the HIV/AIDS Initiative.

It was his early days in the theater that ultimately led to his philanthropic work, which in turn has led to the Steve Chase Humanitarian Award.

“I’m so pleased to be part of this effort,” he says. “I have done work for AIDS initiatives for many years, including Broadway Cares/Equity Fights AIDS, especially in the wake of the devastation I witnessed in the New York theater scene during the early ’80s.

“We didn’t really know what AIDS was at the time or what to do about it. But I was personally touched by its viciousness when it seemed that within a few years many of the people — good people — who would define the next generation of theater were gone.”

In addition to Ballard, Gallagher’s desert friends include the late Stubby Kaye, best known for his role as Nicely-Nicely Johnson in the original Broadway production of Guys and Dolls and then in the 1955 film. Kaye had retired to the desert because he loved golf and lived in Rancho Mirage until his death in 1997.

When Gallagher landed the role of Sky Masterson in the 1992 Broadway revival of Guys and Dolls, he called Kaye.

“I couldn’t wait to tell him,” he says, “and the first words out of his mouth were, ‘You know, a friend of mine wore a light blue hat and light blue suit for that part [referring to Marlon Brando, who played Masterson in the film]. Don’t do that!’”

The production went on to win four Tony Awards, including Best Revival of a Musical.

Another actor with desert ties who made an impression on Gallagher was Cary Grant, who owned an estate in Palm Springs.

“It was 1980, during rehearsal for The Idolmaker [one of Gallagher’s first (and favorite) films, even though he had to take a ballet class to do it], and there was a party at Edith Head’s house. He was one of the most handsome men I’d ever met and gracious, funny, and really easy to talk to. We were introduced, sat down, and had a long conversation about acting and the choices you make. He made it all seem possible. I left feeling great.”

Coincidentally, Gallagher donned one of Grant’s wigs for his role in the 1999 award-winning film American Beauty.

“In that motel room scene with Annette Bening and I, Cary Grant was on top,” he says.

Actor Gary Sinise coaxed Gallagher to come to Rancho Mirage to play in a golf tournament in 2004 and again in 2007 at Porcupine Creek (the former Blixseth estate, now owned by Oracle billionaire Larry Ellison) to benefit Steppenwolf Theatre Company, which Sinise founded in Chicago in 1974 to support the work of aspiring and midcareer playwrights.

In January, Gallagher played in the Bob Hope Classic tournament (now the Humana Challenge) and says he “would like to repeat that this January.” It might be fated, considering that he and Bill Clinton have met, share the same birthday, and the former president will be in town for the tournament in league with the William J. Clinton Foundation.

Besides, he has the Classic tournament to thank for sparking his interest in golf.

“I loved Jack Lemmon. We spent one of the best years of my life on the road with Long Day’s Journey Into Night from D.C. to Broadway, London, and Tel Aviv; and we both got Tony nominations. After that, we went on to do several movies together. I got to know his family and friends, and he gave me my very first set of golf clubs. They had been built for him and all were emblazoned with his name, except for the sand wedge, which he had received at the Bob Hope Classic. I didn’t have the nerve to tell him that the only club ever stolen from that bag was the one with Hope’s name on it.”

Just out of Tufts University with a degree in economics and after a summer at University of California, Berkeley, where he had a scholarship to study “more arcane subjects related to a field I realized I had no interest in or ability for,” Gallagher returned to his native New York to answer open calls for Hair and Grease. He landed roles in both, bolstered by his extracurricular activities in college, where he appeared in Stephen Sondheim’s Company and sang with an all-male a cappella group called Beelzebubs.

Capitalizing on his voice, Gallagher recorded 7 Days in Memphis for Epic Records in 2005 and appears on soundtracks for Pal Joey, Guys and Dolls, and A Doll’s Life, as well as other Broadway shows.

“Music is a powerful way to tell stories,” he says, citing Dean Martin (who, coincidentally, also had a desert home) as his biggest influence. “He’s the reason I started singing. … He made it all look so easy.”

Gallagher has good reason to feel pride in daughter Kathryn’s music-as-storytelling achievements as a singer/songwriter and music student at University of Southern California. Coming to the big screen soon, Someday This Pain Will Be Useful to You — in which he appears — features three songs written and performed by his 18-year-old offspring.

Gallagher himself continues singing. In late October, he took his solo show Songs and Stories to the Fairmont’s Venetian Room in San Francisco. Reviewing the show when Gallagher performed it as part of Feinstein’s at the Regency in 2007, The New York Times’ Stephen Holden wrote, “He inhabits a song so comfortably that it flows directly out, a fusion of his own personality and the character he is playing.”

The character he is playing now — sans singing — is Arthur Campbell, director of the CIA’s Clandestine Service Department on USA Network’s Covert Affairs. In one sense, it’s a follow-up to his four-year role as Sandy Cohen on The O.C.

“The older I get, the more I realize that working with people you like and admire is key, because good things are then possible,” he says. “I have known [producers] Doug Liman and Dave Bartis since The O.C., and they’ve assembled a really great team in front of and behind the camera for Covert Affairs.

“We are having the time of our lives.”