Career architect-turned-assemblage artist Ted Chapin and husband Torrence Boone, a vice president at Google, bought the home as a West Coast getaway after visiting international designer and artist Javier Echenique, a friend they knew through art circles in Cape Cod and New York who moved to Palm Springs four years ago. They rented a home up the street from Echenique for a six-week stay in the spring of 2018. Two weeks in, they began searching for one of their own.

“We came to the conclusion that this neighborhood has the most architectural consistency and integrity,” Chapin says. “And, that we specifically liked Yosemite Drive.” As they began looking, the residence facing their vacation rental dropped its listing price. The home was a rare find in the enclave, where many lots blend into the fairways. A front courtyard creates a buffer from the street while a manicured privacy hedge sequesters the backyard from the golf course, enveloping the home in serene seclusion. 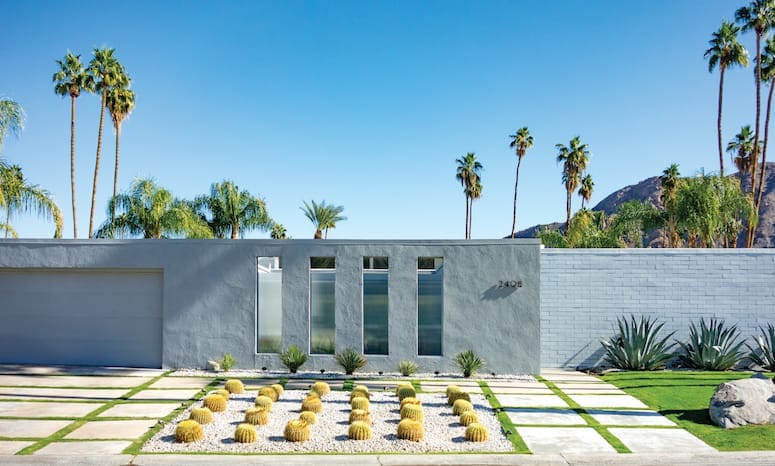 Designer Javier Echenique modernized the formerly brown and dull exterior of his clients’ home with a gray and white scheme, specimen blue agave, and a landscape grid incorporating 30 barrel cactus.

The 1969 home had been robbed of its midcentury vivacity.

Other than those attributes, Chapin says, “It did not show well.” Dark in color and depressing in spirit, the 1969 home had been robbed of its midcentury vivacity. Generic brown wood accents and walls quilted in faux white leather were standouts among other charmless misfits. The kitchen was trapped in a nonsensical layout, and a pool shaped like a jellybean — and visible from many rooms — wrestled with the midcentury columns and clerestory windows. (The new owners wanted a pool they could swim in rather than just float and lounge.)

“When they asked if I would be interested in completing a total remodel, I had some fears about keeping them as friends while taking them on as clients,” Echenique says. “A project of this magnitude implies stress, cost, choices, and time. You never know if that will end well.” 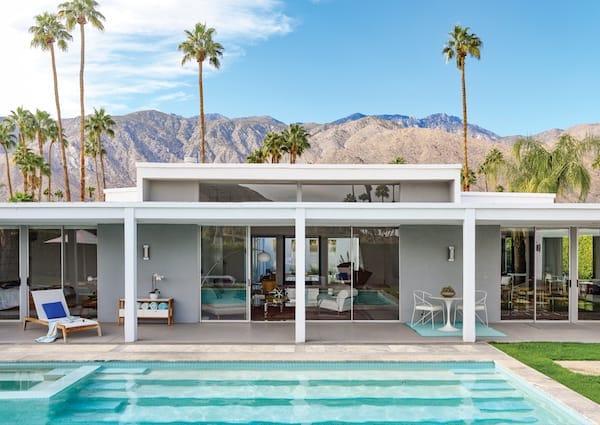 Wide steps into the new pool complement the lines of the patio.

His clients’ confidence eclipsed his own doubt. The couple left for the Cape for the summer, and Echenique began planning the project, from the messy demo and raw construction to the sleek finishing touches. Facetime facilitated the trio’s collaborative efforts, but Echenique led with his design prowess and intimate knowledge of what Boone and Chapin wanted to see and experience in their California home.

Originally from Madrid, Echenique has the gracious and refined air of a well-traveled gentleman — not only from another place but maybe another time. He comes from a line of Spanish artists; his father was one of the pioneers of modern radio and TV in Spain and a talented painter. His grandfather was secretary general at Museo del Prado in Madrid. Echenique is a passionate painter whose professional path has taken him to Lisbon, Buenos Aires, Miami, Provincetown, and New York. When he created a clothing line, Chapin invited him to host the launch party at his Manhattan art studio. Echenique’s design work matches his effusiveness for the local community; both are genuine, bold, and continually expanding.

His sensibilities transfer to the home and its environs, beginning at the curb. Rows of barrel cactus lead the eye to four textured glass panels ushering light into the courtyard, where the hand-painted tiles he designed surround the courtyard fountain, which sits flush in the walkway like a bubbling carpet. 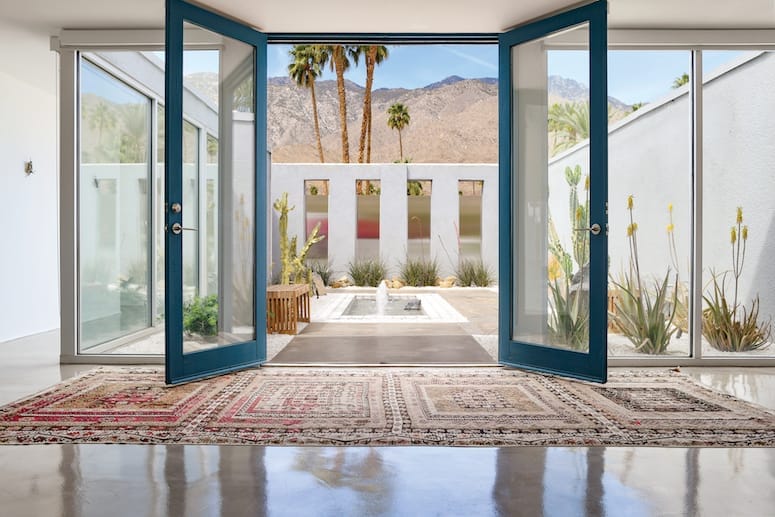 Echenique removed a “dark jungle of ficus” from the perimeter of the courtyard to reveal the full view.

Stepping through the double glass doors, one is washed in filtered sunlight and a feeling of vast openness normally earned by going outside, not in. He fulfilled the clients’ wish for this “sense of spaciousness” through several techniques. Note the perfect white paint for Indian Canyons’ daylight, a creamy gray refinish on the concrete floors, and two floor-to-ceiling marble fireplace façades in a scale that lifts their respective rooms.

“We needed 10 people to install them,” Echenique says of the slabs mounted in the living area and main bedroom. “It was complicated, but worth it.” He also upgraded the 80-inch doors throughout the south wing of home. The replacements reach the 96-inch height of the celling to “give a spatial dimension more in line with the house.” Living spaces are inviting yet not over furnished — a place for gathering amid the couple’s art collection, which has room to breathe and speak. Echenique reconfigured the kitchen to flow into the new dining room and a casual lounge area. This communal space offers the first glimpse of three wall-paper treatments. “The idea of wallpaper was very weird to me,” says Chapin. “It’s what my mother put on the walls in our 1950s house. But Javier kept on pushing, and we opened up to the idea.”

Locally sourced vintage pieces team up with modern selections from the international design world. When in Rome, Echenique fell in love with the wood-top dining table on a warmly reflective copper base. Midcentury chairs surround the Italian centerpiece, within reach of a Danish modern sideboard. Echenique names At-HOM, Hedge, JP Denmark, Christopher Anthony Ltd., Flow Modern, and a La MOD among his local resources. 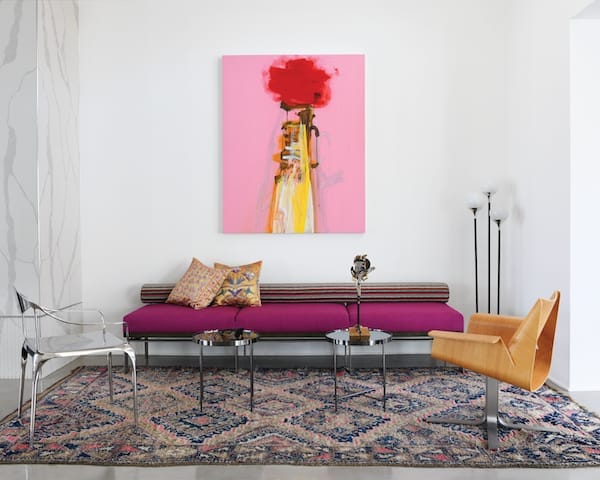 A vintage silk kilim from Pakistan forms a foundation for a vintage steel and fabric bench by Knoll and Slip by Bert Yarborough.

One is washed in filtered sunlight and a feeling of vast openness. 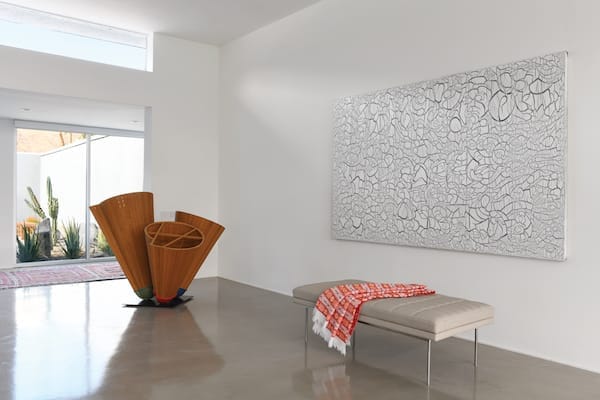 A gallery moment in the home features a Rick Wrigley sculpture and a painting by Ed Moses.

“When my clients and friends began to see the combinations of different furniture and styles and wallpapers, we reached a perfect symbiosis,” Echenique says. “It’s eclectic: a little European with a Palm Springs touch and inspiration.”

Two imposing doors instead of one now open into the primary bedroom, where the marble fireplace echoes the one in the living room, an extra dressing area makes good use of an overly generous walk-in closet, and the bathroom appears to double in size.

Thirteen sliding glass doors open to the courtyards and patios. In the backyard, Echenique demolished the kidney-shaped pool to make way for a key facet of the overall design: the new swimmer’s pool, which does justice to the home’s geometry and welcomes daily laps, stretching 55 feet across the backyard. At the far end, a three-sided cabana punctuates the design.

Boone and Chapin returned six months later to find an unrecognizably bright, modern home facing their former rental. By Christmas, they were settled in like locals. 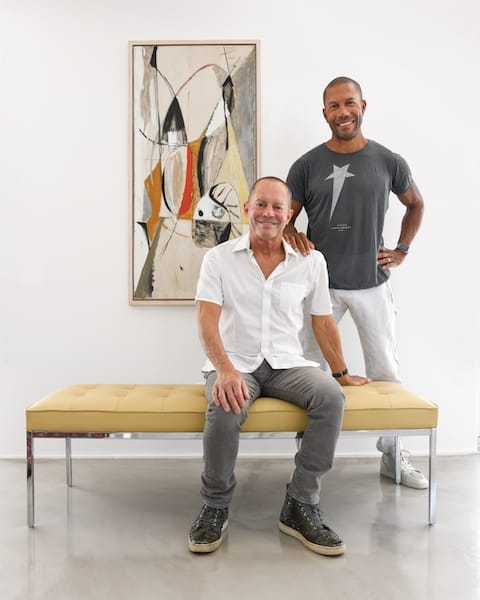 A vintage work by Jim Forsberg hangs behind Ted Chapin and Torrence Boone. 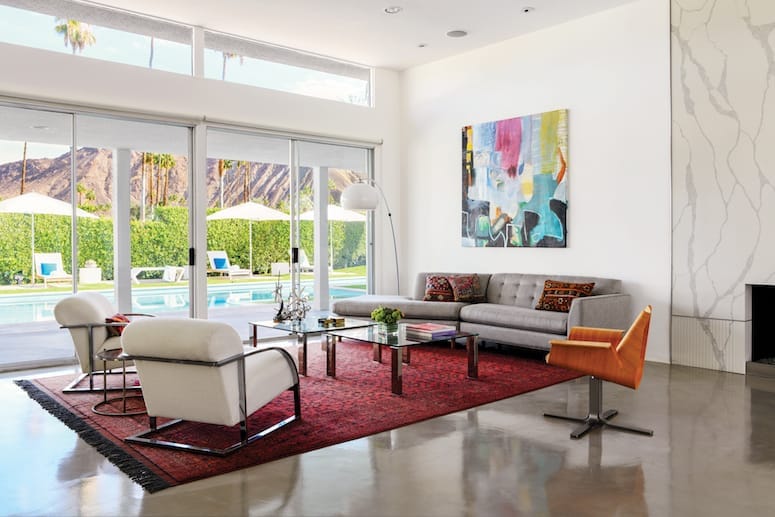 Little Did I Know by William Cokeley brings color to Echenique’s mix of new and vintage furnishings. 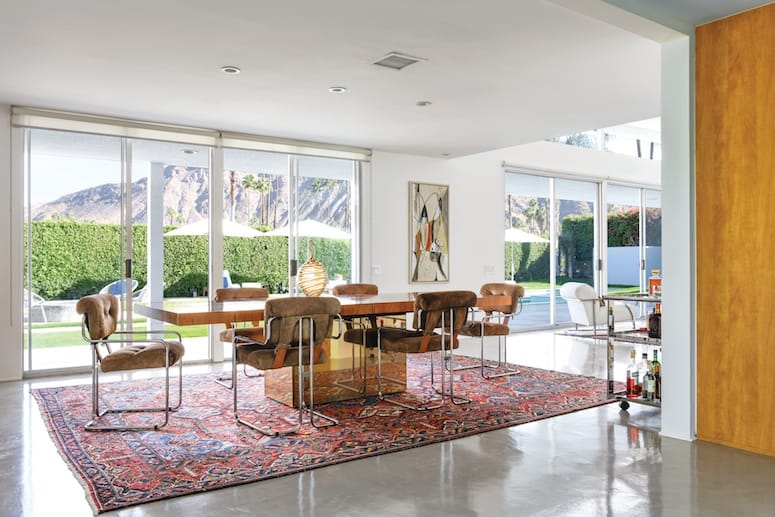 Echenique sourced a rare set of 12 vintage Tucroma dining chairs designed by Guido Faleschini for Pace in 1970 and a wood dining room table with solid copper base made by Ico Parisi from Rome. 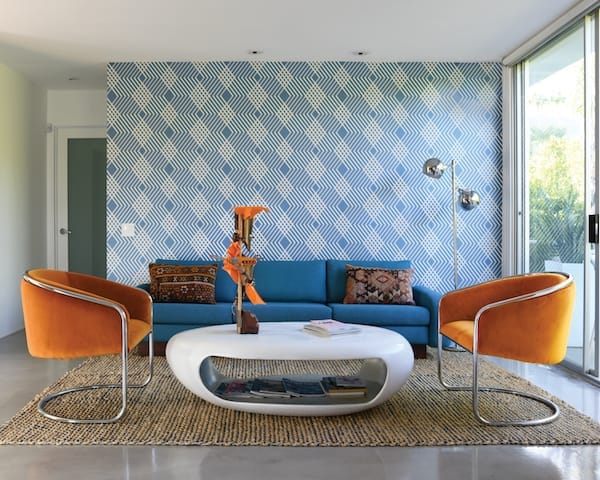 Now, the pair has made their “winter house” their primary residence. Since the pandemic took hold, Boone has worked remotely between Palm Springs and New York. One en suite bedroom morphed into his home office.

A guest bedroom features an installation of Chapin’s artwork, which he sells through Melissa Morgan Fine Art in Palm Desert.

In the mornings, Chapin heads to Parkview Mobile Estates, where he has fashioned a home into his art studio. In the late afternoons, he and Boone circle back to spend the evening together. Summers will still be in Provincetown, a tradition for more than 25 years, although Chapin says, “A truly shocking number of our friends are looking for a home here. There are now four Cape Codder/Provincetown households with places on this very same street.” 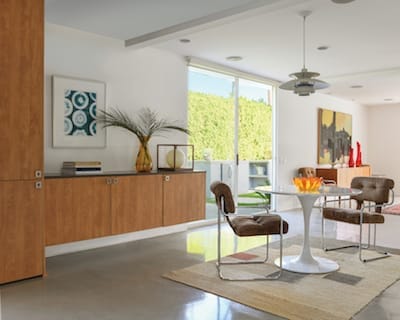 It’s eclectic: A little European with a Palm Springs touch. 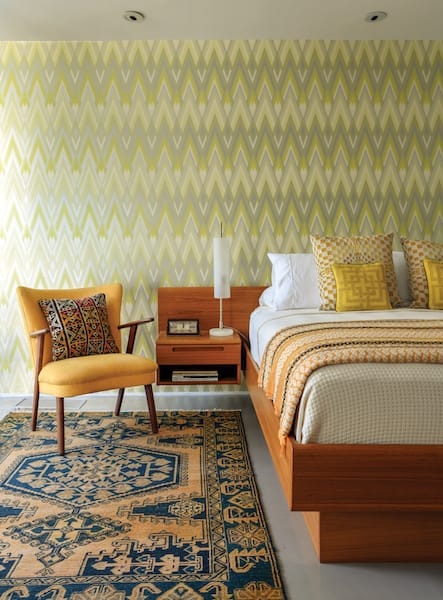 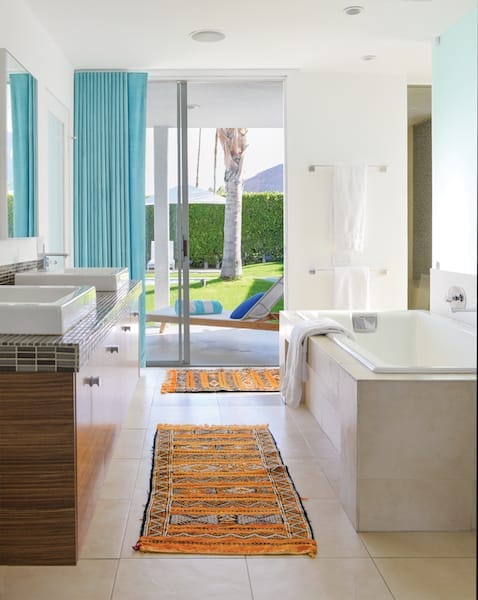 During their first full year on Yosemite Drive, they’ve been “loving our Palm Springs existence in this home,” Chapin says. “Javier, Torrence, and I had an extraordinarily productive and enjoyable synergy in achieving the successful transformation of the house.”

An architect for 28 years before becoming a full-time artist, Chapin is relieved they didn’t select “a very serious vintage piece of architecture” by a named architect. “It’s an anonymous design that has good, strong bones. It’s almost Miesian in its simplicity,” he says. “Because so much had changed over the years, it wasn’t a precious thing. That gave us the freedom to make interventions where we thought fit.” 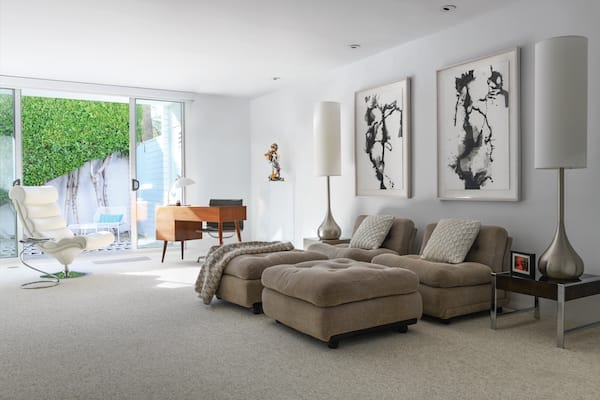 Boone’s office doubles as a TV lounge. The ink paintings are by Jeannie Motherwell.

The friends’ camaraderie endures over dinners and pool time. “I completed the 4,200-square-foot remodel with furnishings, landscape, a new pool, and solar panel installation in just nine months,” Echenique says. “Out of that experience, our relationship grew even stronger.” Stronger and closer: a walk down the street. 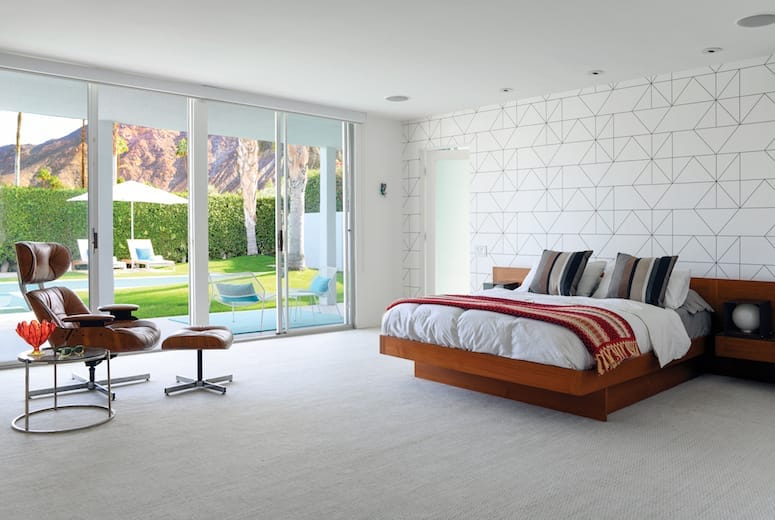 Echenique says the Danish modern bed from 1970 arrived in pieces without instructions. In the primary bedroom, a leather lounge chair faces a Danish teak bed with floating nightstands by Jesper, topped by a Turkish blanket.

• READ NEXT: The Cielo Rock House Comes Alive After Dark in Palm Springs.