Jay Hart on the set of Guardians of the Galaxy Vol.2.
PHOTOGRAPHS BY MADELINE NORTHWAY

Jay Hart landed in Palm Springs last fall with the sense of relief that comes after a movie wraps. He’d just spent five months working on Those Who Wish Me Dead, a wilderness thriller directed by Taylor Sheridan and starring Angelina Jolie set for release in October. He’d commuted home for the occasional weekend (the film was shot in New Mexico), but this time, instead of going back in two days, the set decorator could slip back into his quiet life in the desert.

Hart, who was nominated for Academy Awards for L.A. Confidential and Pleasantville before winning for Black Panther in 2019, was a few days into his R&R when he received an offer to serve as the set decorator on the new Lord of the Rings series. The Amazon Studios production promised to be groundbreaking and was already on track to be the most expensive series ever made.

• READ NEXT: “That ’70s look” is coming back, and Matthew Reader is ready for the revival.

Having to plan and decorate the neighborhoods and homes of hobbits and orcs and elves from the Second Age of Middle Earth was an exciting prospect, but it also had a pragmatic advantage: Hart was eager to work with the production designer. The two jobs interact closely in movie making, evidenced by the fact they share an Oscar for art direction.

“Jay is one of those people who just gets it,” says Jeffrey Chernov, an executive producer on Black Panther, for which Hart shared the Oscar for art direction with Hannah Beachler. “He understands the language of the director and the production design team. He knows what he has to do to make a set visually stunning. And he’s consistently calm.”

That’s meaningful praise for the talent behind the scenes on such mega-budget franchise and science fiction extravaganzas as Guardians of the Galaxy Vol. 2, Terminator Genisys, Spider-Man 2, and Independence Day: Resurgence. Stop there, however, and you get a misleading impression of his career. In his 35 years in the business, Hart has worked on movies of all genres and budgets, including Westerns (3:10 to Yuma), comedies (Wayne’s World), spy thrillers (Clear and Pleasant Danger) biopics (Machine Gun Preacher), and mind benders (Fight Club).

There were two catches to the job on Lord of the Rings. First, Hart would need to leave in a week, cutting short his personal restoration. Second, he had to commit to a year on location in New Zealand — too far away for that occasional weekend at home.

Hart took a couple days to mull it over. He and his husband, retired businessman David Mazer, were set to celebrate their 25th anniversary over Thanksgiving weekend, and they had long ago accepted that working in the movie business required travel. But this was different. Mazer had sold his business and had triple bypass surgery, and while fully recovered, Hart couldn’t see spending a year away. They talked about leasing their Rancho Mirage home and going together to New Zealand, but that didn’t feel right, either.

Another offer arrived within weeks: set decorator on Netflix’s The Harder They Fall, a Jay Z–produced remake of the Western of the same name, which is shooting in New Mexico and starring Idris Elba. Hart spent Thanksgiving at home, went to Sante Fe to begin prep, and returned home for Christmas and New Year’s Eve. Then, he started coming back for the occasional weekend.

Hart, who grew up in Pittsburgh and went to college to be an interior decorator, wasn’t always in high demand. Nor did he aspire to work in Hollywood. After living in New York, he returned to his hometown and, at age 27, landed his first job in set decorating on a zombie movie. He took every job offered to him for the first seven years.

Jan Pascale was the set decorator on 1985’s Dawn of the Dead who gave him his first job. She recalls being impressed by Hart, even then: “Jay had a leg up on some of us, because he was an actual interior designer.”

The zombie classic, directed by George Romero, was shot underground in Pittsburgh. “I mean, literally, under ground,” Hart says. The call time was before dawn. Most of the crew went into the cavern and didn’t leave until after dark. Set dec got more time outside. “I would go out and get the blood and guts for the zombie to eat on camera. I buddied up to the butchers.” Every morning, he went to grocery stores to pick up “fresh packages of livers and fresh stuffed sausage casings that looked like intestines. When they slaughtered beef, they would have the big bones for me.” He would haul it to the underground set decorating department and boil the bones, lay out the meat on carts, then mix up the blood (a blend of ketchup and Karo syrup). “If you wanted chunky blood, you used oatmeal” — the kind of thing they didn’t teach in college.

Hart moved to Los Angeles in the 1990s, and although he still wasn’t completely sold on working in the industry, he kept landing films, sometimes two a year, like Losing Isaiah and Bridges of Madison County, which were both released in ’95.

Set decorators play a significant role in the look of a movie, says Neil Spisak, a production designer who worked with Hart on Spider-Man 2 and Those Who Wish Me Dead. “Everything that goes into the set that isn’t constructed scenery is set decorating.” Spisak knows of no other job on set with as many moving parts and pieces. “Every thing tells you more about the character. None of it is just tossed in. That’s what Jay does brilliantly — make those decisions based on forwarding the story.”

“He knows what he has to do to make a set visually stunning.”

Hart started vacationing in Palm Springs shortly after moving to L.A. and met Mazer in July 1996 at a party in Thunderbird Heights. He’d heard Mazer talking and recognized his accent. “I said, ‘You’re from Pittsburgh!’” Hart recalls. “It caught him off-guard.” They exchanged numbers, but that was all.

Mazer was in a different line of work, one at the crossroads of traditional American capitalism and the evolving demands of the 20th century. Instead of building a better mousetrap, he made Elbow Grease, a sex lubricant, at a time when it had little competition. Marketing from 2001 tells the story: “Founded in 1979 as a revolutionary alternative to Crisco, lotion or spit and persuasion, Elbow Grease is one of the oldest independent lubricant companies in the world.”

Although Mazer quickly knew that Hart was “the one,” Hart needed more time. That September, months after the party, Hart called Mazer. He was in the San Francisco area working on Phenomenon, a movie directed by Jon Turteltaub and starring John Travolta. That began a five-month phone correspondence and a mental-calendar tracking system that continues to this day, where if Mazer needs to know when something happened or where they were, he figures out what movie Hart was on.

After that film wrapped, they finally started spending time together. By January, they agreed to a committed relationship with a strong admonition from Hart that things move slowly. They closed escrow on their first house together that April.

Over the next years, the pair split time between Los Angeles and Palm Springs. Hart had always traveled somewhat for work but as more states began using tax breaks to lure movie productions out of California, travel became the norm. Without need for proximity to traditional working Hollywood, the couple was free to move to the desert full time, first to Rancho Mirage, then Palm Springs, and recently back to Rancho Mirage. 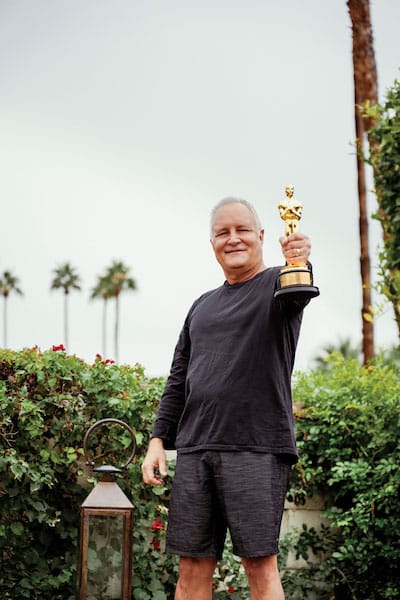 Hart appears unaffected by the outpouring of praise that accompanies winning an Oscar. At first, he gives the regular, albeit honest, answer, saying it was “an amazing moment” and he was “thrilled to be honored.” When pressed, he says it’s not as important as the body of work. “Out of the three nominations, Black Panther was the one where I thought we had the biggest chance. I thought we did great work on Black Panther, but we did just as good of work on L.A. Confidential. It was just a different kind of work.”

When he and Mazer arrived at their seats at the Academy Awards, Hart found Pascale, who serves as a governor on the Academy of Motion Picture Arts and Sciences, seated beside him. “Talk about full circle,” he recalls, adding that seeing the person who’d given him his first job in Hollywood centered him. It also had a whiff of serendipity. Pascale says that in six years of attending the Academy Awards, she had never been seated with category nominees.

So, how does Hart feel now, one year later? “Going to the Oscars, though thrilling, is nerve racking and a lot of work,” he says. “I am very happy to be at home this year, in my robe and slippers, and watching it on TV.”