Matthew Reader drives me around Palm Springs in a friend’s 1977 Pontiac Bonneville Brougham. The car is a rolling testament to its era — an ostentatious yet misunderstood time in the U.S. auto industry — and laden with baroque details like two-tone bronze and buckskin paint, a taupe vinyl half-roof, an upright hood ornament the size of a disco chest medallion, fender skirts over the rear wheels and, most notably, a striped velveteen interior in 50 shades of beige. The license plate reads VELOUR.

“People are curious about these cars,” says Reader, a 50-year-old child of the era. “They were disposable. They weren’t meant to be around four decades later. They’re crummy, but people have an appreciation of their terribleness.”

Reader is a real estate agent in the Coachella Valley. Having spent almost 10 years with the Paul Kaplan firm, he now sells as many as 30 houses a year. “I like to sell things that I like,” he says, quite plainly. He is similarly passionate about cars. Though he now owns only four — a 1966 Dodge Van, a 1978 Chevy Corvette, a 1984 Oldsmobile Omega, and a 1989 Buick Park Avenue — he’s bought and sold about 50 cars in his lifetime. “It’s fun to have different cars for different occasions — to have different outfits and drive them around,” he explains, inadvertently adhering to my mantra: All cars are drag. 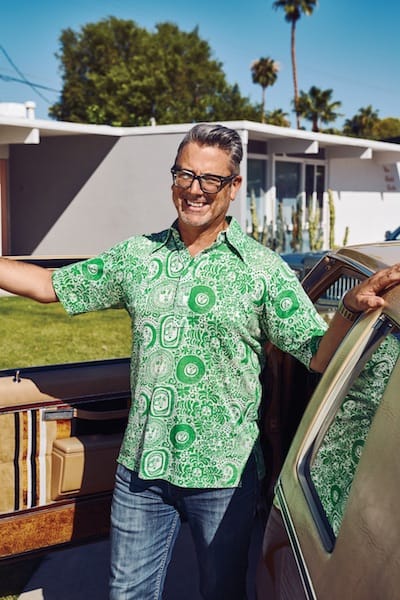 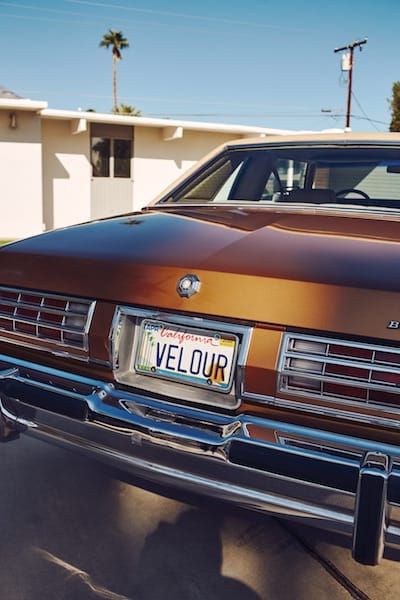 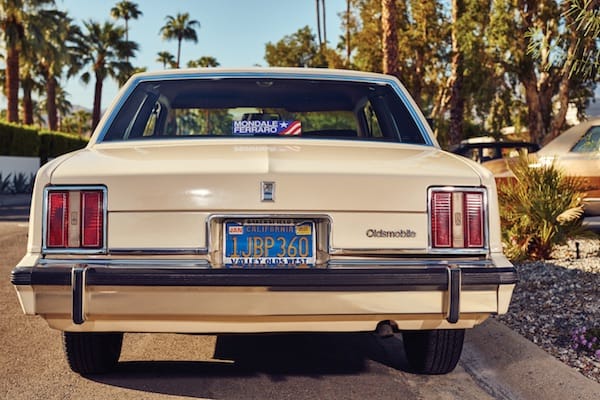 Most of the housing stock that Reader sells is prime modern, glass and steel and stucco houses designed by architects such as William Krisel, Donald Wexler, and William Cody built in their career peaks in the 1950s and ’60s. But, as with his love of vehicles, he’s also attracted to a slightly later, and slightly time period.

“The high modern look can be so over-manufactured these days, with everything looking like it came from West Elm,” he says. “And all the coolest, most original houses are already sold, and often renovated beyond recognition. But now the generation that built their houses in the 1970s is dying. And people are open to the ’70s look, especially people who were not adults in the ’70s.”

This was a period when architects took many of the ideals of desert modern architecture, and then applied a gloss of historical pastiche — callbacks to Greek, Roman, Egyptian, or Spanish Colonial styles — in a kind of nascent post-modernism. 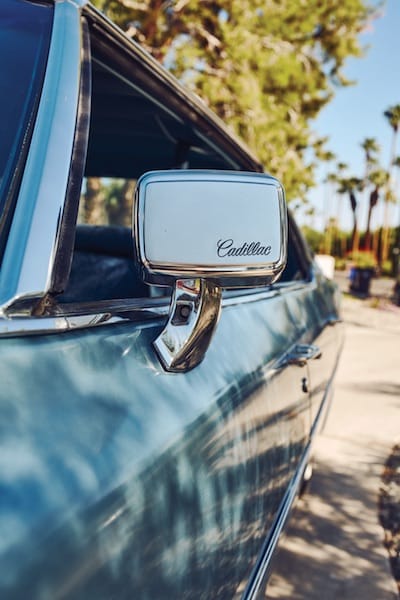 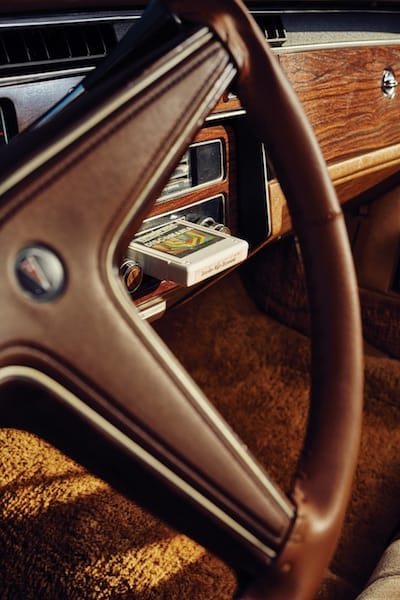 Cadillac with The Pontiac Bonneville. 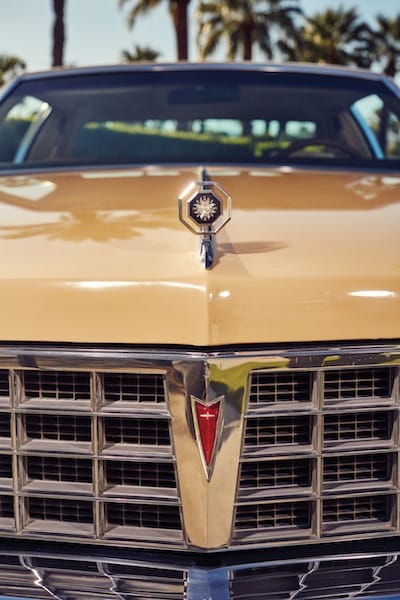 “They weren’t meant to be around four decades later.” 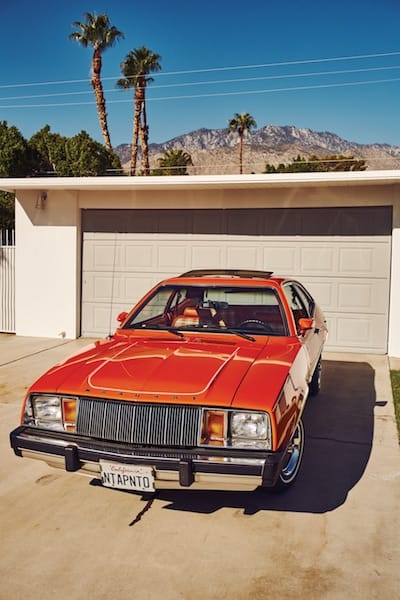 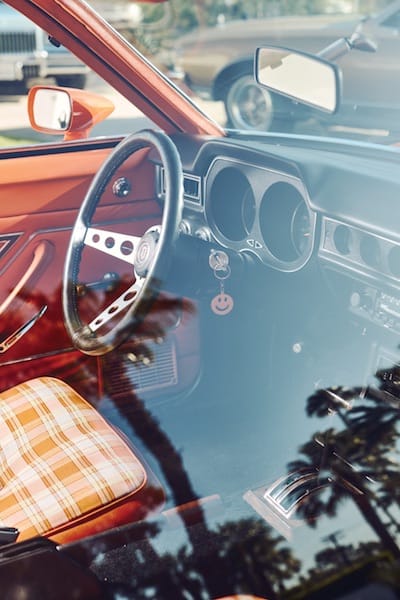 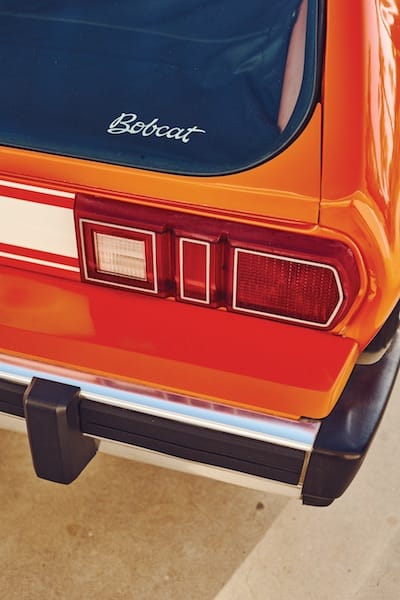 “During this time, designers looked backward to classic design, and began to incorporate it,” Reader says, as we drive by the Greek/Mayan Telly Savalas house, and the monolithically Pharaonic Jerome Factor house. “William Cody went into this kind of hacienda look in the Tamarisk Country Club houses down in Rancho Mirage, with pitched roofs and red tiles. The scale is amped up, and the details are kooky but sophisticated. Or think of A. Quincy Jones designing Sunnylands. That place is crazytown. It’s like a modernist Hearst Castle.”

The same neo-classical experimentation took place concurrently in automotive design. “A lot of these car designers, like Bill Mitchell at General Motors, were having fun at the sunset of their career, taking cues from classic cars, and glossing them on to more contemporary vehicles.” This is how some of the aforementioned rococo features ended up on the Pontiac in which we were conducting our tour. It also explains the existence of others on similar vehicles from the era: opera lights, opera windows, bustle back trunks, upright grilles, convertible-style landau bars, wire wheel covers, boat-tailed rear windshields, and ersatz “Continental-style” trunk-mounted spare tires. 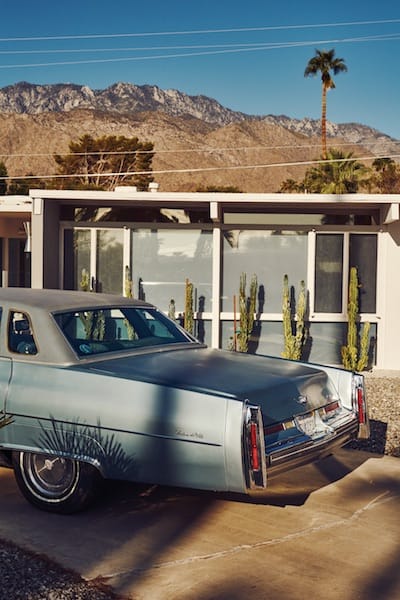 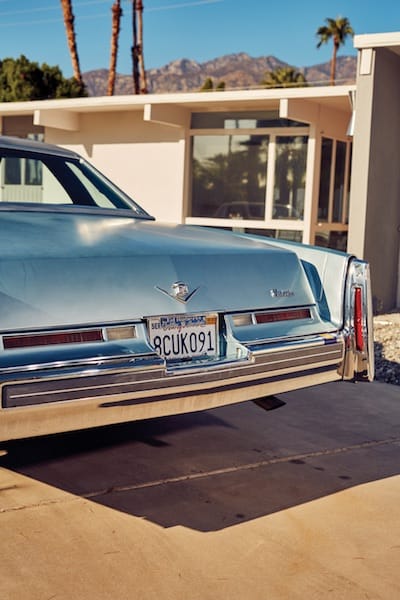 As we drive around, Reader confesses that he is always on the lookout for new, oddball “Malaise era” homes to peek into or sell. “There’s one house that’s been boarded up for 15 years. The owner is in assisted living, but her husband was purportedly one of the founders of UPS,” he says. “It’s this ’70s-awkward, Brady Bunch-style ranch house, and I’m just dying to get inside.”

And as we pass one of the local consignment car dealerships, where aged widows and widowers part with their dearly departed’s luxury vehicles, he confesses: “Right now, I have my eye on a 1983 Oldsmobile Toronado
that I see a woman driving around. She must have bought the car new. I don’t want to say I want her to die,” he jokes, campily. “But I do love her car.”

• READ NEXT: At McCormick’s Classic Car Auctions, Turning Over the Classics Never Goes Out of Style.