A Desire for Community Brought Jonathan Bennett to Palm Springs 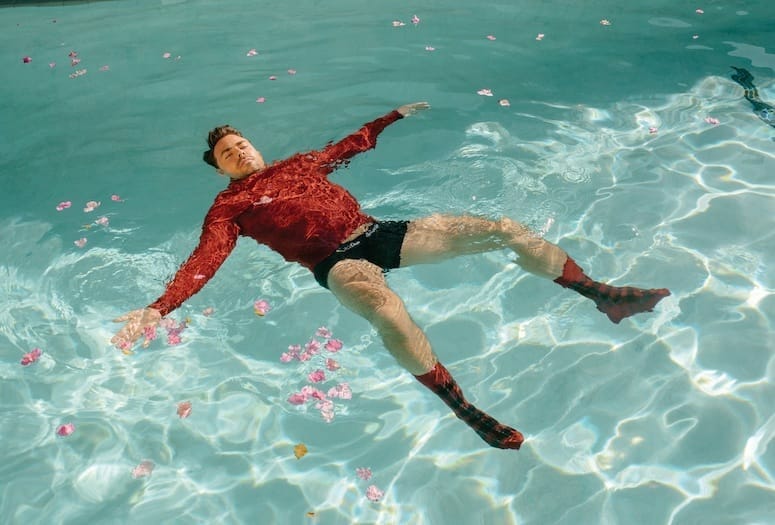 Jonathan Bennett might be the first person who moved to Palm Springs because of fried chicken. During a sojourn from Los Angeles, the 41-year-old actor best known as the dreamy young love interest in Mean Girls and more recently as a stalwart Hallmark Channel player was dining with his now-husband at Chicken Ranch in Uptown Palm Springs when they made the decision to relocate here.

“I turned to my husband when we were having lunch after talking to Mike [Smith], the owner, and said, ‘Is this what it feels like to be a straight couple in every other small town in America?’ ” recalls Bennett, who grew up in itty-bitty Rossford, Ohio. “It was inspiring to be part of a majority in a small town. It felt so comfortable. We knew at that moment, this is where we had to live.”

Bennett and his partner, Jaymes Vaughn, solidified their plan in 2020 when they stopped splitting their time between L.A. and Las Vegas, the city fellow performer and former Chippendales host Vaughn called home. The duo bought a funky 1970s pad from their designer friend James Kirtley. (“It’s like a Brady Bunch-goes-to-Hawaii theme,” Bennett says of the design.) Vaughn later proposed to Bennett in their backyard in North Palm Springs, and the pair wed earlier this year in Mexico.

“People ask why we live in Palm Springs, and I joke that when I hit 40, West Hollywood kicked me out,” a slightly sweaty Bennett says over a post-workout iced tea while clad in an aqua tank top and short black gym shorts. “We love it. My husband and I go to Billy Reed’s at 5 o’clock for dinner — and we’re happy about it. We’re among our peers.” 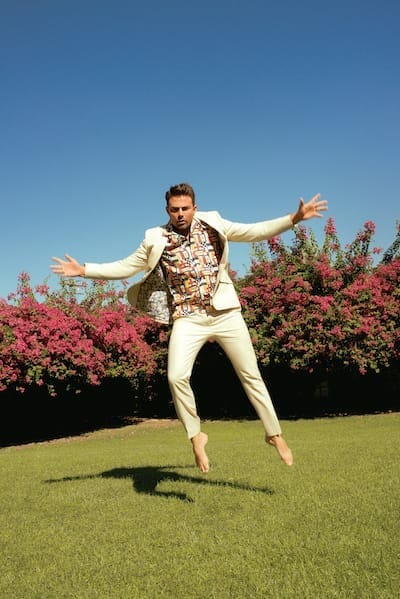 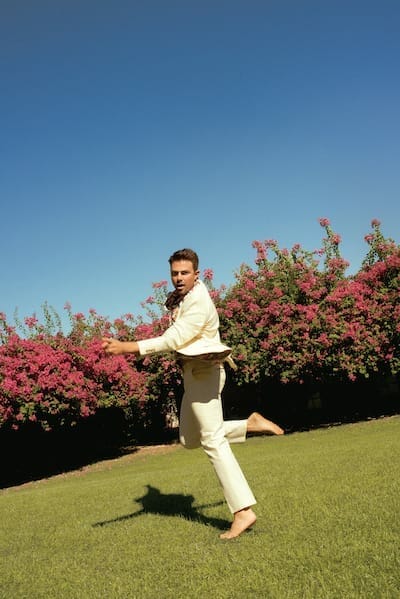 “It was inspiring to be part of a majority in a small town.”

Unlike his day job, it’s not an act. For the social media savvy couple — Bennett is nearing 1 million followers on Instagram — their Palm Springs abode is their full-time residence. Not convinced? They proudly have a running tab at Rick’s Restaurant & Bakery and bought all the chairs in their backyard from PS HomeBoys. “If I have to go to L.A. for a job or audition,” Bennett says, “I’d rather take the hour-and-45-minute drive back at the end of the day to my backyard with my dog, husband, and the beautiful mountains and trees of Palm Springs than have to live in L.A. ever again.”

Bennett’s journey to the Coachella Valley began outside Toledo, Ohio. His involvement in high school theater (and torment by bullies for being gay) compelled him to head to New York to pursue acting. He soon landed his first major role on All My Children and went on to appear in shows such as Veronica Mars, Smallville, and Law & Order: Special Victims Unit before starring opposite Lindsay Lohan in Mean Girls in 2004. Over the past decade, Bennett has also fully embraced being his authentically smiley self on screen, hosting Cake Wars and Cupcake Wars on the Food Network as well as competing on Dancing With the Stars and Celebrity Big Brother.

In recent years, Bennett has become a regular presence in warm-and-cozy Hallmark Channel movies like Elevator Girl and Love at First Glance. He made history by portraying the first gay lead character in a Hallmark movie in 2020’s The Christmas House and reprised the role in last year’s sequel, The Christmas House 2: Deck Those Halls. (Not to be pigeonholed, he also still plays straight. He was a goofy groom earlier this year in Wedding of a Lifetime.) Bennett doesn’t take his Hallmark stature lightly and will continue appearing on the channel “as long as they’ll have me.” 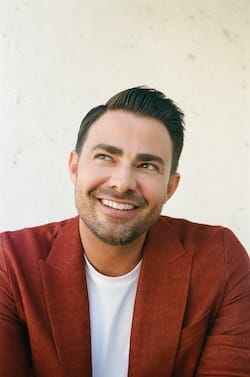 For his seventh Hallmark film, Bennett is smashing the channel’s biggest barrier, starring alongside George Krissa as the first gay couple in the romantic comedy The Holiday Sitter, which Bennett also executive produced. The film, out Dec. 11, focuses on Sam, a hapless bachelor portrayed by Bennett who is forced to take care of his niece and nephew over Christmas. A fan of John Hughes films of the 1980s and ’90s, Bennett lovingly describes The Holiday Sitter as “gay Uncle Buck.”

“Being an executive producer on this movie was such a rush because I knew I was telling a story of a character that was like me,” Bennett says. “I know all the little Jonathans out there in the world that are watching this with their families are going to see themselves on the screen. Our other executive producer, the entire creative team, the director, and the writers are all LGBTQ+. We had a whole family of people on board to tell this story accurately.”

The actor quickly points out that just because The Holiday Sitter revolves around a gay couple doesn’t make it any less Hallmarkarian. “It’s not an LGBTQ+ rom-com,” Bennet attests. “It’s a Christmas rom-com that happens to have two males as the leads. That’s the difference. It’s making history, but it’s a movie made for everyone, not just one specific audience.”

For Bennett, his most memorable scenes to work on in The Holiday Sitter included the meet-cute moment when Sam literally falls into his hunky neighbor’s arms. Bennett and co-star Krissa were brought to tears while filming because they were hit by the magnitude of the moment. (“We both got really emotional,” he says of the unexpected ugly cryfest.) But it was the movie’s goofy cooking-for-kids set piece that brought Bennett the most joy.

“It’s my favorite kind of scene to play as an actor because it’s a fish-out-of-water moment,” Bennett says. “Uncle Sam, who has no kids and is the eternal bachelor, doesn’t know how to cook and burned down the kitchen the last time he tried. Now [he] has to make these two kids breakfast without blowing up the house. It’s such a fun moment.” 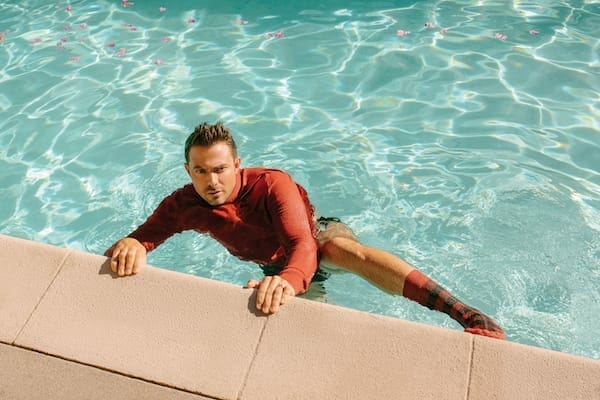 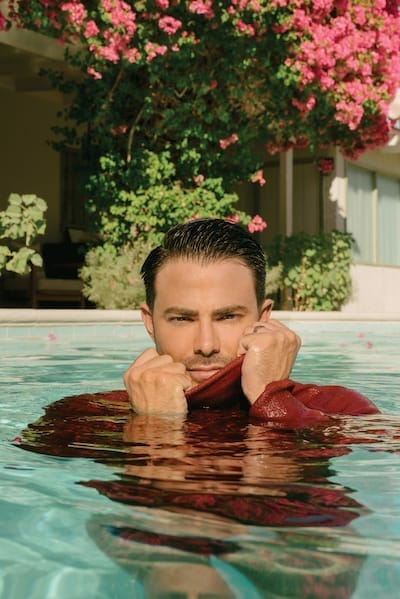 “There are a lot of things about Palm Springs we want to share.”

There won’t be any Hallmark-level cheer from Bennett and his real-life partner Vaughn during their holiday break in Palm Springs. The couple are unapologetically low-key when it comes to celebrating Christmas. “Holidays are weird for us,” Bennett acknowledges. “I spend so much of my time shooting Christmas movies in August that by the time the real Christmas rolls around, I’m too tired to put up our tree.”

Bennett’s exhaustion might have something to do with the latest credit he’s added to his resume: business owner. Inspired by other LGBTQ+ couples who started their own enterprises in Palm Springs, Bennett and Vaughn, along with their pal Eric Hodgson, launched a queer-focused travel company during the pandemic called OUTbound, which offers an alternative to the many hyper-sexualized gay cruising experiences on the market. For instance, instead of camouflage underwear night on the pool deck, OUTbound might host a dinner where everyone is encouraged to don a silly wig.

“We wanted a cruise company that was the anti-circuit party cruise,” Bennett explains. “Our cruises are small and intimate. Right now, they’re around 100 people max. We rent river boats and take LGBTQ+ people on these adventures to check off their bucket list, but we’re doing it in a safe environment where everyone can feel celebrated and seen.” 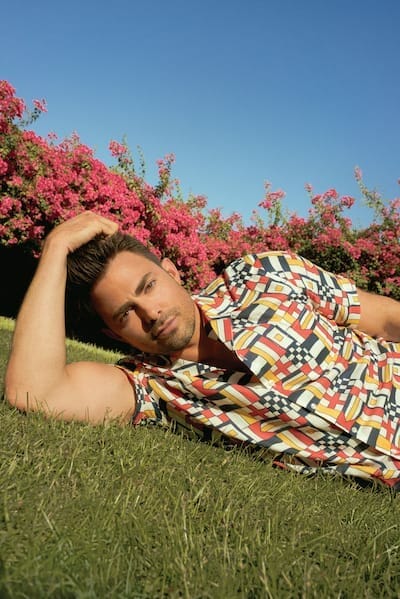 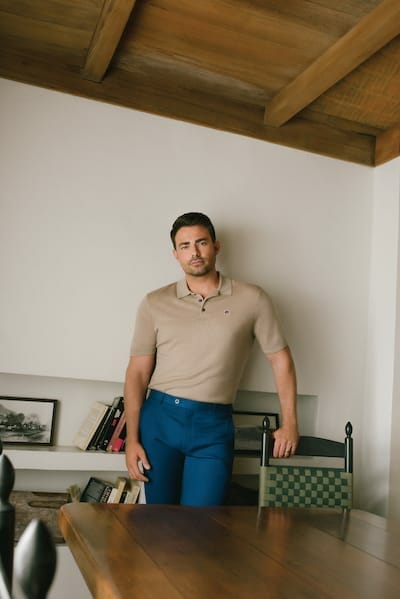 In their first few years of business, Bennett says about half of his clients — lovingly called OUTbounders — hail from Palm Springs. They’ve traveled to destinations such as Portugal, Croatia, and the Netherlands. “We have been supported by the Palm Springs community,” he says. “They have come out by the dozens to not only support us but tell their friends about us. As a new business owner, I can’t explain how it feels to have an entire community support your business.”

While OUTbound events feature famous RuPaul’s Drag Race stars like Heidi N Closet, Jan, and Jackie Cox, they boast Palm Springs–area talent, too. “We want to support the local community because the local community has supported us, so that’s why we’ll bring local queens like Anita Rose from Oscar’s to help host and do bingo on the trips,” Bennett says. “It’s not always about being the most famous or well known. There are a lot of things about Palm Springs we want to share with our OUTbounders.” 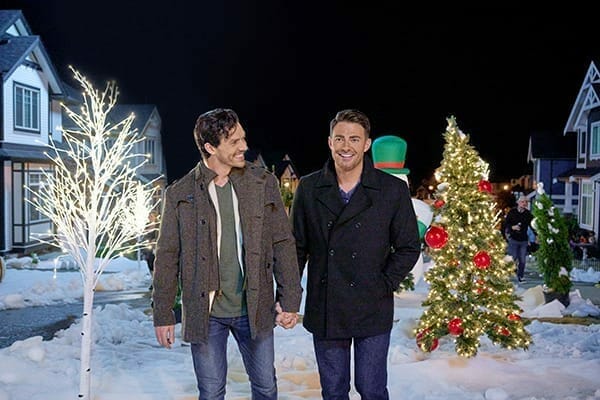 Jonathan Bennett (right), shown with George Krissa in The Holiday Sitter, which premieres Dec. 11 on the Hallmark Channel.

Bennett looks forward to 2023 when OUTbound will visit Hungary, Holland, France, and Africa. First, he’ll be back in New York at the end of this month to host Times Square New Year’s Eve for the third time. Whenever he’s not traveling next year, Bennett plans to be at home in the desert. “I love it so much,” he says. “Palm Springs is the best thing to ever happen to me and my husband. It’s absolute gay heaven in the middle of the desert. We love every part of it.”
• READ NEXT: Palm Springs Really Knew How to Throw a Holiday Party in the 1930s, '40s.