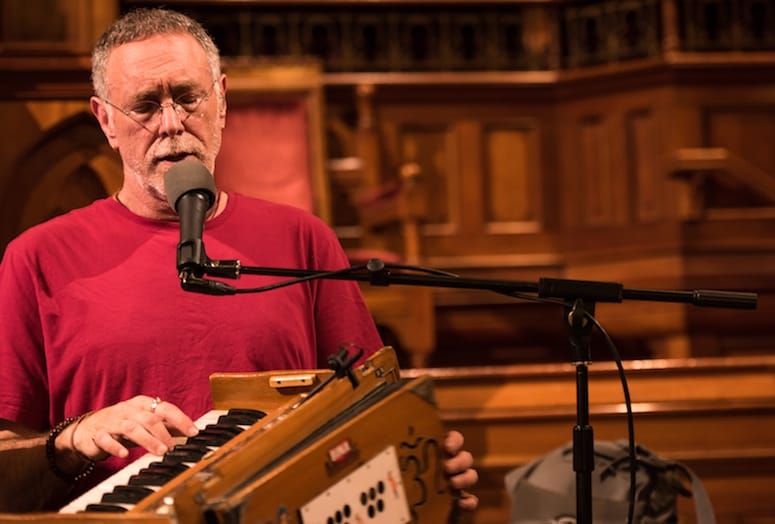 While growing up, music was the most important thing in Krisha Das’ life.

“Let’s be honest,” he adds sheepishly, “that and girls.”

Like many adolescents navigating the path from child to adulthood, KD found solace in all sorts of genres of music including such legends as Ray Charles, Van Morrison, Steely Dan, and Bruce Springsteen. Krisha Das on music: “Music itself can liberate you a little bit from the problems of daily life, but it can’t give you yourself back."

“Music helped me get through the emotional ups and downs to find my way through life,” he says. “It had a way of calming me, centering me, pulling me out of confusion, and the intensity of life growing up.”

However, as years went by, KD found that music was not enough for him to find strength and inner peace. In his travels, living in India for a stint, and meeting his beloved guru, KD found that Bhakti yoga practice brought him closer to his heart.

He began to chant in devotion to his Bhakti yoga practice and has since become what’s been characterized as “Yoga’s Rock Star.”  His CD, Live Ananda, was nominated for a Grammy in the Best New Age category. His story gained further recognition in the documentary, The Story of Krishna Das, which chronicled his chanting path, and captured best documentary at the Maui Film Festival in 2012. Krishna Das on chanting: “Chanting combines the power of music with the power of sacred sound… a sacred mantra."

“For me music was like a practice,” he says. “Music itself can liberate you a little bit from the problems of daily life, but it can’t give you yourself back. Music pacifies you in a good way, but then you want to go deeper and you want to find a way to bring that kind of strength from your own heart when you quiet down. (My Bhakti practice allows me to connect with) what’s underneath, like the waves on the ocean. There is a lot movement, energy, a lot to deal with the wave – but as you go deeper into the ocean it gets calmer and opens up to you.”

Palm Springs Life.com spoke with KD as he prepares for his trip to the high desert. On Bhakti as a Spiritual practice:

“Bhakti means “devotion. Bhakti is part of every practice. You have to devote to it and love it and want to get into your practice. Bhakti is not necessarily falling in love with your teacher, or deity. It is a sense of commitment to the practice.”

On the pursuit of happiness:

“I wanted to be happy. Happiness is a pretty basic situation that we can all understand. We all want to be happy in a way that it doesn’t end. It makes us more open to other people and not afraid. (Happiness) gives us strength to live a better life. I think that is what we are looking for.”

“Chanting combines the power of music with the power of sacred sound… a sacred mantra. These mantras have a different type of energy and strength and power because these mantras have emanated from within a deeper place inside of us. From the repetition of the mantra we get moved and music helps us do that.”

On sharing at Joshua Tree:

“Joshua Tree has it’s own unique presence. It certainly, in its own way, is a wonderful place to gather and do these practices. It’s a very beautiful.”