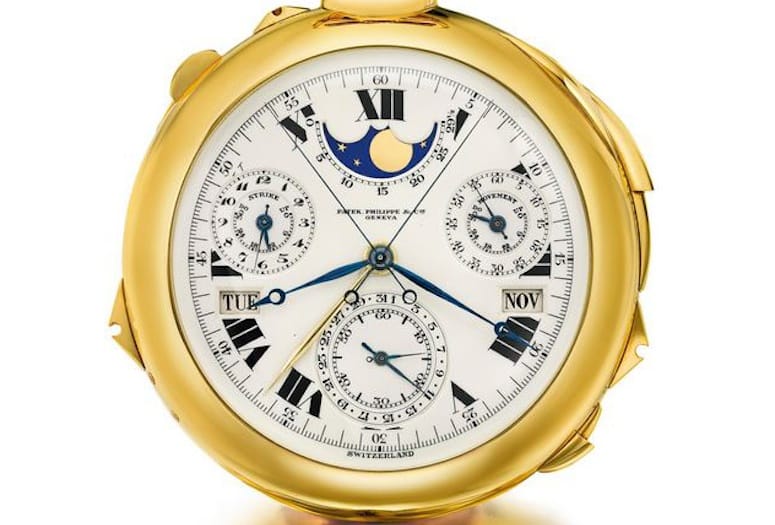 2015 has been deemed "The International Year of Light and Light-Based Technologies" by the United Nations.

La Quinta Museum has molded this concept into its new exhibition, “It’s About Time.”

The star of the exhibit is the $24 million “Supercomplication", one of the most expensive timepieces in the world. While the actual watch is not on display, it's story is. The piece itself is tucked away somewhere by its mysterious owner. The inner workings of the "Supercomplication" allows it to read celestial stars.

The opening night party coincides with the museum's First Friday monthly event on Feb. 6. Magician Rob Watkins performs from 5-6 p.m., followed by a 6-7 p.m. reception.
Sherry Martinez, director of the City of La Quinta Museum, took time to talk to Palm Springs Life about the exhibition.

How many timepieces are in the collection?
"There are sundials, a replica of Eleanor of Aquitaine's sundial ring, miniature grandfather clocks, full-size grandfather and cuckoo clocks, mantel clock, kitchen clock display with 13 pieces and several types of clocks — alarm, clock radio, world time clocks, etc.." Tell me about "Supercomplication"?
"It [is] a result of a lifelong contest between Ward Packard, of Packard automobile fame, and Henry Graves, Jr. son of a wealthy Wall Street financier, to build the world's most "complicated" mechanical watch. It was delivered to Henry Graves, Jr. in 1933. Later, he would regret having the watch made due to kidnapping concerns for his family, and almost threw the watch into a lake until his daughter, Gwendolen, persuaded him to put it in a museum. It was considered lost for many years. When the museum went bankrupt in 1999, the watch came up for auction and was auctioned off anonymously for $11 million. Again, the watch was considered lost. When it came up for auction again last fall it was discovered that a Royal Saudi family member had bought it for $11 million in 1999. Upon coming up for auction this time around the watch sold, again to anonymous bidder(s) for $24 million in the first 15 minutes of bidding. At the current time it resides with the buyer, who is unknown."

The La Quinta Museum is open from 10 a.m. to 4 p.m., Tuesday through Saturday.

Where does the title “Complication” stem from?
"The watch weighs approximately 1.3 pounds and among the 24 complications can read the celestial stars. Every hour a different and unique "Complication" operates. It took three years to design and five years to build with the Patek Philippe Company. It is considered the most expensive watch in the world at present."

If you could take home any watch out of the exhibit, which would it be and why?
"I think it would be Eleanor's sundial ring, which she gave to her husband, Henry II. He, in turn, allegedly gave her a sundial ring as well. How the ring works is intriguing."