Lindsey Vonn: “I am excited to start this new chapter in my life and share it with everyone."
PHOTOGRAPH BY RAMONA ROSALES

Editor’s Note: Lindsey Vonn was originally scheduled to speak April 10 at the Champion Honors Luncheon at the Westin Mission Hills. The event has been canceled due to the COVID-19 virus. This story was written before the virus outbreak.

Lindsey Vonn, the greatest women’s ski racer of all time with 82 World Cup victories and three Olympic medals, ended her professional career last year after suffering a series of injuries. But she never speaks of retirement.

“There’s still the adrenaline junkie in me who wants to skydive and travel,” she says, launching into the list of all she hopes to achieve and experience in next chapter of her life. “Number one is to be with my fiancé P.K. [Subban, a defender for the National Hockey League’s New Jersey Devils]. I also want to grow my foundation and my business. It’s going to be difficult to keep it all in balance.”

Add to the mix an April 10 appearance at The Westin Mission Hills Resort & Spa in Rancho Mirage, where the Barbara Sinatra Children’s Center will fête Vonn at its Champion Honors Luncheon for her work supporting girls through scholarships, education, and athletics.

“Our goals are to fund more girls camps, inspire confidence, and give more scholarships to the girls who need it,” she says of her namesake foundation. “Although I have not had the opportunity to work with children who were psychologically or physically abused, it is very important to shine light on this subject and make sure children and their families are aware centers like Barbara Sinatra exist and that there are people who want to help.”

When Barbara and Frank Sinatra founded the center in 1986, cyberbullying didn’t factor into the trauma and psychological and physical abuse the staff sees there today. Back then, few could have imagined the rise of social media, let alone its potential dark side that sometimes leads to physical and emotional violence, occasionally resulting in suicide.

Vonn, who was bullied, or trolled, online during the 2018 Olympics, relates to this kind of abuse. “The best way to respond to being bullied is to trust that you know who you are and what you believe in,” she says. “It’s easy for someone to judge you from behind a screen, but only you know what’s right for you. If you can’t ignore [the bullying], talk to someone and ask for help. Social media is not an accurate portrait of your true self, so getting encouragement and support from the people who know you best really helps.

“It is important to help children who have gone through traumatic experiences,” Vonn continues. “The Barbara Sinatra Children’s Center does exactly that, providing counseling and setting up children for a better future.”

A Minnesota native, Vonn ended her skiing career as the winningest woman in the sport, and trailed only Sweden’s Ingemar Stenmark in World Cup victories. Vonn (82) hoped to break Stenmark’s record (86) in 2019, but her body was unable to match the force of her indefatigable will. “My body is broken beyond repair and [didn’t allow] me to have the final season I dreamed of,” she says. “My body is screaming at me to stop, and it was time for me to listen.” 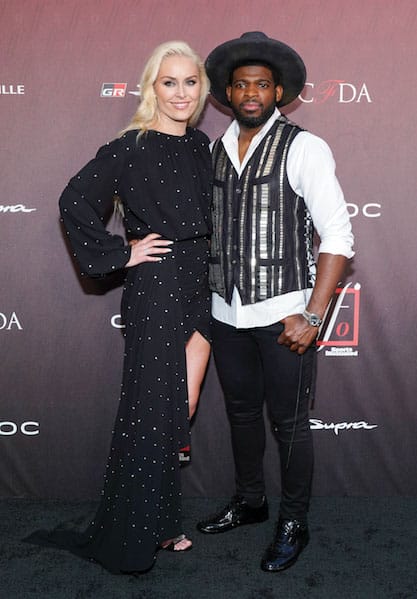 Vonn’s swan song came nine days after announcing her retirement last February, when she won the bronze medal for downhill at the FIS World Ski Championships in Åre, Sweden. She has since written a book, Rise, due out later this year, and is filming a HBO documentary and executive-producing a movie with Robert Redford. She also is launching her own beauty line.

“I am excited to start this new chapter in my life and share it with everyone,” Vonn says. “If I were to write another memoir 10 years from now, I hope I would have a family to write about, business experience to teach, and a new perspective of my accomplishments as an athlete.”