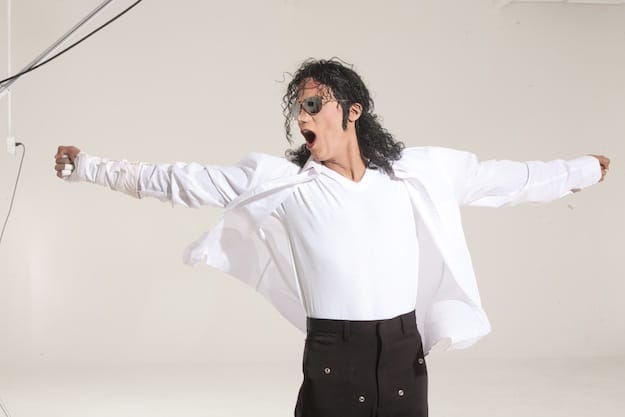 Kenny Wizz has gained international notoriety as one of the best Michael Jackson impersonators in the world.

It has been no small feat to accomplish such an act. Ironically, while it has become Wizz’s career for nearly 30  years, it is only by resemblance to the late “King of Pop” that he ever got his start in show business.

Wizz explained, “ As a street dancer in LA (as a teen), people recognized that my dancing and features, without all the fancy outfits and make-up, resembled Michael Jackson. They told me all the time – ‘you look and dance like him’. In all honesty, I think I only tried impersonation because I wanted to tell people that I auditioned and it didn’t work out.”

Wizz built his following by spending 11 years in Las Vegas performing as Jackson in the show, “Splash” at the Riviera Hotel and Casino. Now he travels from one point of the globe to the next, but he will bring his show to the Agua Caliente Casino Resort Spa June 29 for an 8 p.m. show.

In a candid interview, Wizz gave Palm Springs Life a glimpse into his life on stage and the actor that portrays one of the most famous entertainers ever to grace the stage:

How did you train to imitate Michael Jackson?
“As a performing actor, I have studied and prepared for this character role just as you study a role for a movie. My approach has been, in life, toward anything really, is that if you strive to do things well then you can affect the outcome. In this case, it’s about my passion for doing the performance and production the right way. I do not believe that I am that person, it is my role…the stage audience is my camera rolling while I am in character.”

How did you perfect your voice and presence to achieve such a true to life impression of Michael Jackson?
“I will never be 100 percent vocally, even though I do sing live. I might come close but that is not my focus. I want to achieve an overall affect. I am a tribute artist, not Michael Jackson, so costume changes, stage production, and video can represent historical eras for a total visual interpretation of Jackson. I also think my training as an art student and make-up artist has helped with ‘shadow and contouring.’ I have had no surgery done – even though people offered to pay for it. Instead, I’ve gotten better with makeup and that can help change your looks.

How much preparation is required for this transformation on stage?
“It takes a lot of energy. About three hours of prep before each show with two hours of make-up alone followed by vocal warm-up, costume and then I have to regroup and reset my emotions. It takes great mental and emotional concentration to get into character.

Is it difficult to step out of character?
“One of the aspects that I understood from the very beginning and that I told myself was to ‘never allow yourself to think that you are this person. Do not count this fame as yours.’ It’s about being a passionate performer and doing a good job at what I do, which is entertain. It’s not about being famous. I have my own personal life when I leave the stage. This actually allows me to step away and be me so that I can bring intensity to the character and the role I play when I do step on stage. You can’t even recognize me leaving through the stage door without all the make-up and that’s fun.”

Did you ever meet Michael Jackson?
“No, I never met him. But I’ve studied him for so long that I sometimes feel like I know him already. Members of the Jackson family have seen the show and said, ‘I did a good job.’ But truly, personal fame was never an aspect I wanted to pursue. I am not in this for personal accolades, but for my own passion for music, dance and respect for this artist that by default I happen to look like. I never have taken this for granted”.

What is your favorite song in the “History” review concert to perform?
“I don’t allow myself to have a favorite song because you have to ‘bring it’ to every song. The audience will notice if you feel strong energy for a favorite and then the next song will feel flat. I want to perform each song as if it is only one performed for the night.”

What would you like your audience to take away from this performance?
“I want them to enjoy the concert experience. We’ll always have music and videos, but people want to see something live. It’s a magical moment to give someone that may not have had the opportunity to see Michael Jackson in concert an experience that gives them goose-bumps.”