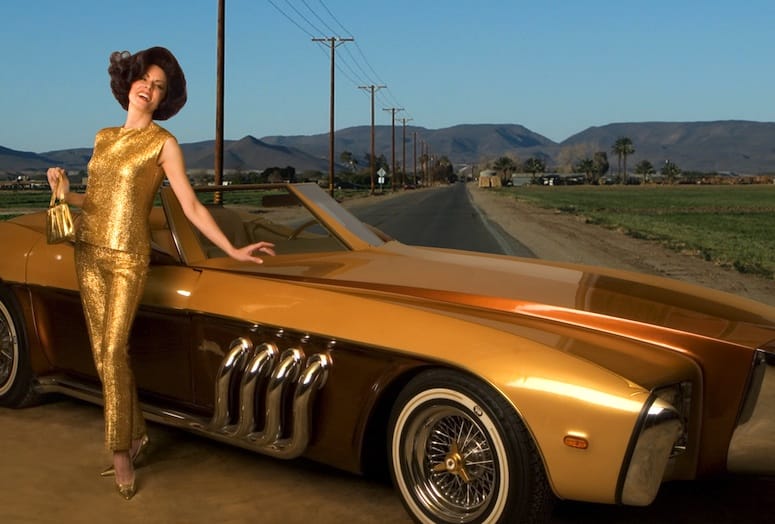 On a recent tour in Germany, she scored couture fashions from Munich circa 1961-62. Kay's passion for finding fancy costumes and seeking out fabulous hair styles only compliments her highly stylized image giving homage to her favorite era, midcentury modern… 1959-1964, specifically.

“I grew up in Texas and my look is reminiscent of the women in my family. They love big hair,” Kay says. “Beehives, bouffants and glittery, sparkly costumes seem to lend to the era that I most have an appreciation for. As a singer, I also try to find outfits that work with the shape of my figure and don’t hit at the diaphragm. The clothing from the late ‘50s, early ‘60s are cut a bit looser, but still have a tailored feel.”

Kay’s current music also takes inspiration from the past. Her voice has been described as a mix of “maple syrup and black velvet” with her concert performances delivering high theatrics a la David Lynch. She recently released an EP, The Allure of Lynda Kay recorded by Capitol Records, and she says her influences include:

Kay will be the featured guest at “A Night Out For Trevor”, a benefit for The Trevor Project, on June 21 at Escena Country Club in Palm Springs.

The Trevor Project is a national organization that provides crisis intervention and suicide prevention services for LGBTQ young people.

According to event chair, Chaz Stevens, “This will be a new, yearly signature event for Trevor and those people lucky enough to be in attendance are in for one heck of a night!"

“It is very important to me that I participate to send a message of love and acceptance, to the thousands of youth The Trevor Project serves, who are struggling with hate, fear, and prejudice,” Kay says. “I am proud to contribute to the life-saving mission that the Trevor Project so passionately pursues.”