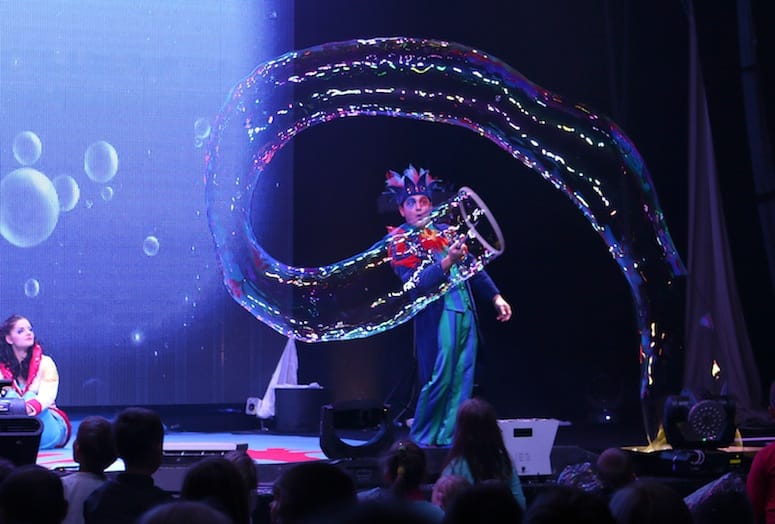 The McCallum Theatre is going to fill its lovely, expansive, state of the art, stage and auditorium with… bubbles.

Envision participating in a magical experience surrounded by iridescent, floating orbs. The Underwater Bubble Show (inhabited by the creatures of Bubblelandia) will make that happen as just one of the remarkable acts planned for McCallum Theatre’s 2016-17 season. Though the prestigious facility has never attempted something quite like this before, Mitch Gershenfeld, president and CEO of the McCallum Theatre assures, “It’s something that has been designed for theatres. The Underwater Bubble Show is an amazing spectacle. It comes from Latvia and will fill the entire auditorium with bubbles. It creates an immersive environment with sand and painting and different elements that will be every bit as wonderful for parents as well as kids. I think it’s gonna be an incredible adventure of wonder and of things that they’ve never seen before. I believe that this is one of the things theatres do best…create alternative worlds where people can let their imagination go wild.”

The Underwater Bubble Show will head the fifth annual Family Fun Day on Oct. 23, which starts with food at noon and follows with the performance at 2:30 p.m.

Gershenfeld says McCallum Theatre is coming off the most successful year in box office ticket sales in its history, ensuring the 2016-17 lineup is going to be big (and bubbly). Drumline Live makes its first appearance at McCallum Theater during the 2016-17 season.

“We have 22 new performances and artists that have never performed here before, plus star-studded favorites including Jay Leno, Johnny Mathis, the dance company BalleyBoyz®, and so much more,” he says.

• Fun Fact: The Ten Tenors are the most popular group in the history of The Mccallum Theatre and they will return for eight performances. Of course, Mitch’s Picks, the successful series that showcases Gershenfeld’s personal selection of artists that may not be as well known to Coachella Valley audiences, returns for a third year.

“I like discovering new things people will be interested in,” he says. “When I’m looking at putting shows together, I’m looking for best kind of shows I can get…with broad appeal(This year) I couldn’t decide which to leave off so there are six shows instead of five.” Speaking of ukelele’s, Gershenfeld, also a former musician, is practicing his own instrument in anticipation of joining an audience of ready players.

The Ukulele Orchestra of Great Britain scheduled to perform in December 2016 are said to be inviting the audience to bring their own ukuleles to play along. Gershenfeld says, “I hope to have 1000 ukeleles playing Christmas music in the audience.”

Individual tickets, “Create-Your-Own” packages, and select subscriptions are on sale online or at the McCallum Theatre box office. Phone orders will not be accepted. Visit www.mccallumtheatre.org for a complete list of the 2016-2017 McCallum Theatre programs and schedules.