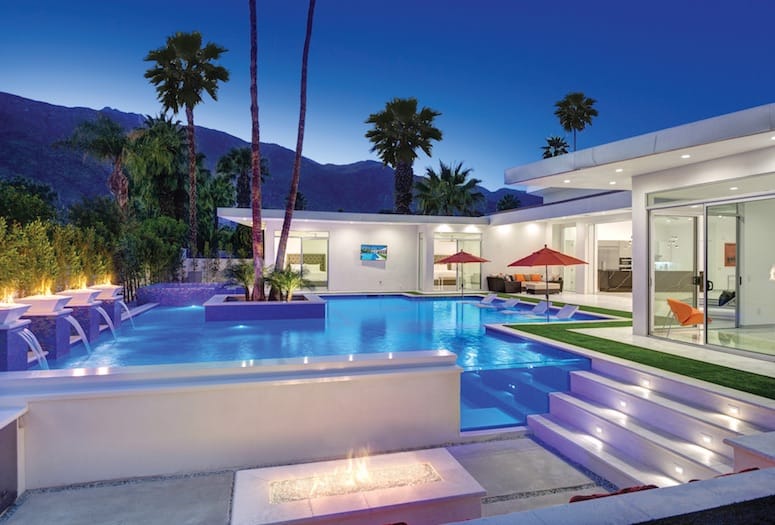 An acrylic-glass wall provides an underwater view from the sunken fire pit area into this award-winning design by Melo's Pools and Outdoors.
PHOTOGRAPH BY JAMES BUTCHART

If  twin palms stand in the middle of a yard that needs a pool, most homeowners would relocate them. Faced with this scenario, however, owner and developer Bravo Properties demolished the home and saved the trees on this lot in the Movie Colony. “The owner wanted to go big,” says Albert Melo of the palm-friendly pool his company, Melo’s Pools and Outdoors, designed and constructed. “And he was willing to do whatever we came up with.”

Bigger than 2,000 square feet, the aquatic wonder by Melo’s Pools and Outdoors encircles the existing trees, showcasing them on a tropical island of sorts in the middle of the pool. Water pours from tiled columns topped by concrete fire bowls, and an acrylic-glass pane offers a glimpse into the underwater world — all in complement to the five-bedroom home built as a luxury vacation rental.

• READ NEXT: 5 Outdoor Nirvanas at Homes as Interesting as Their Owners.

A win for the trees, its homeowner, and the guests who have blown it out of the water on social media, the pool also made a splash in the Pool Wars 2019 contest sponsored by swimmingpool.com.

Round after round, the project waterlogged its competition, floating straight to the top of a pool of entries that attracted some of the country’s most impressive places to take a dip. But really. Was there any competition at all?

Its 10-person spa is encrusted in glass tile, which also covers the larger of two tanning ledges. Up to nine sun loungers can line up across the large tanning shelf while a smaller, shallow one offers a wade-and-play area that’s six inches deep. After dark, GloBrite LED lights illuminate the pool in a colorful display visible from every room in the house.

Even professional photography doesn’t show the half of it. Beyond a sunken seating area around the fire pit in the foreground, a 20-foot bar serves swimmers who can take a seat on five submerged stools. A drone video on the home’s VRBO.com listing brings the project’s three-dimensional drama to life — but it doesn’t capture the moment Melo’s nerves were set on edge.

“That acrylic-glass wall took a lot of engineering,” he recalls regarding the concept borrowed from public aquariums and zoos. “When the pool was filling up the first night, I went there at 7 p.m., then 10 p.m., then 12 a.m., because deep inside I was thinking, ‘That glass better hold up!’ We also had to double-engineer the wall around the palm trees with waterproofing and steel reinforcement so the roots grow downward and not sideways.” Twin palms, double the effort, and a legendary endeavor to uphold a treasured part of the native landscape.