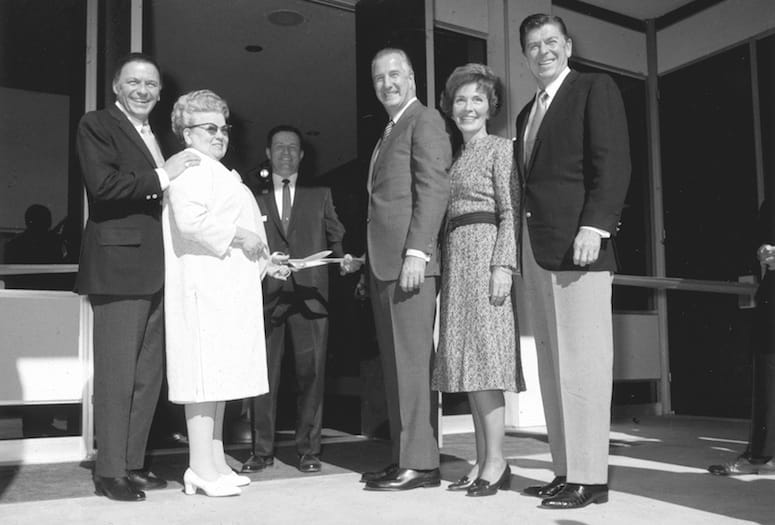 It was late afternoon at his Rancho Mirage compound, but the day was just starting for Frances Albert Sinatra. He and his wife, Barbara, lounged on chaises by the pool, an overweight cat named Bozo asleep on his shoulder. Miss Wiggles and Caroline, two cavalier King Charles spaniels, rested on either side of Frank. He stopped petting them for a moment to pick up the local paper.

Buried in a story about a young girl in Indio who dreamed of becoming a concert pianist was a line that punched him in the gut. Despite all the young pianist’s promise, her parents lacked the resources to buy her even a thirdhand spinet.

Sinatra closed the newspaper and, in minutes, reached his secretary on the phone. A few days later there was a knock on a door in Indio and two burly movers appeared on the young girl’s doorstep with a piano. There was no note. The whole incident, according to the late former mayor of Palm Springs, Frank Bogert, was “the darnedest thing. I don’t know who the little girl was but she was learning to play and didn’t have a piano. So Sinatra gave her one.”

The girl never learned the name of her benefactor.

That story may be apocryphal, but it was business as usual from Sinatra’s pocketful of miracles.

His press agent, Jim Mahoney, remembers Sinatra reading a story about a Londoner visiting America who left her purse in a taxicab. He tells the story in his biography Rat Pack Flack: “Frank called and asked me to check out a story in The New York Times about a 71-year-old woman and a slick cabdriver who charged her $237.70 to take her from JFK [airport] to Woodbridge, New York, [then] a $35 fare at best. [Sinatra] was so moved, he asked to have my New York office track her down and give the money back. He took the plights of others personally.”

The late Gale Anziano, a Garden City, New York, social worker who once took it upon herself to keep tabs on all Sinatra’s acts of generosity, told then–Philadelphia Inquirer reporter Annette John-Hall and co-writer Lini S. Kadaba that she was “amazed” at the stories she found.

The dedication of the Martin Anthony Sinatra Medical Education Library was held Jan. 12, 1971.

Here’s one: Sinatra read an article about a Philly couple on welfare saving up to buy a bike for their son. After some bad luck, they had to use the money for food. Easy layup for Mr. Sinatra. He sprang into action and bought the kid a bike. But he didn’t stop there. He then delivered the gift himself along with a load of groceries. And, to add icing to the confection, he covered up his ol’ blue eyes with such oversize dark sunglasses the family had no idea it was the Chairman of the Board. As John-Hall and Kadaba reported, “the family wanted to tip him.”

The “anonymous” aspect of these stories is what resonates most with Sinatra fans. He didn’t want any rousing hosannas for a lot of the things he did personally for others. Many never even knew who their guardian angel was.

But you didn’t have to be a nobody to benefit from Sinatra’s generosity. He helped out big shots, too. Famed Dracula portrayer Bela Lugosi, for example, was so broke when he died, his family had no cash for the funeral parlor. Frank stepped in and paid the expenses in full. According to close friend and golf legend Ken Venturi, the family of a small child hospitalized at Eisenhower Medical Center found out when they were leaving the hospital that their bill had been paid. Somehow Frank had found out they couldn’t pay it. Frank Sinatra makes nice with policewomen at the 1958 Palm Springs Police Show, which benefited both the police department and the Palm Springs Boys’ Club March 29, 1958.

If you needed cash and Sinatra sensed it, he would leave a signed blank check around so you’d find it after he left. No need to embarrass anyone. Or if he saw a performance he liked, soon a gift would arrive. And he remembered his debts to others with a flourish.

The classic example is his experience with famed Lithuanian impresario Michael “Prince Mike” Romanoff (aka Harry F. Gerguson; aka Prince Michael Dimitri Alexandrovich Obolensky-Romanoff). Prince Mike once owned nightclubs in Palm Springs and in Hollywood. When Sinatra was struggling and couldn’t catch a break, the prince saw him through that tough time. Later, when the circumstances were reversed and the prince himself was destitute, Sinatra, according to film crew member Marvin Shapiro, who witnessed the scene, gave Romanoff a role in the film Lady in Cement so he could earn some much-needed cash.

Not all his gifts were acts of charity; some were quirky. There were the golf sweaters from Canyon Country Club gifted to every friend and acquaintance. He bought so many sweaters for his friends (in every color but orange, his own favorite) that one year a business journal cited the club’s pro shop as the most profitable in the country. (One rule, though: Recipients could exchange them only for size. Frank would decide what color looked best on you). Like so many of the Hollywood crowd who came to the desert in the ’40s and ’50s, Sinatra could be counted on to chip in for local causes. The annual fundraiser known as Desert Circus roped in local celebrities to benefit the United Way.  When it tried to expand its benefactor base to Texas, Sinatra juiced the effort by taking Dean Martin to the Lone Star State. They performed a tune composed by Jimmy Van Heusen and Sammy Cahn especially for the occasion. It was titled, “It’s 1,200 Miles From Palm Springs To Texas.”

Charities didn’t have to come begging. Frank was the first to raise his hand whenever anyone called for volunteers. Need entertainment to raise money for the Palm Springs police? A new private school? How about a temple to celebrate Reform Judaism? A Catholic church in Cathedral City? A sculpture court for the museum? Or a Frank Sinatra charity funded by a tournament?

Sometimes his name got placed on a building without his even putting up a dime. In Astoria, New York, Sinatra’s friend and colleague Tony Bennett founded a public high school and named it the Frank Sinatra School of the Arts. Why name it after Frank? Bennett’s answer was simple: “There was a tenderness in him. He really cared about people.” Betty Ford thanks Sinatra with a kiss after his performance at a fundraiser for Eisenhower Medical Center, April 13, 1977. Sinatra, Bob Hope, and George Kirby raised more than $2 million at the gala event.

Some people said this compassion resulted from his working-class background; he identified with people who were struggling through life. (This was the guy, remember, who dragged his own PA system from dingy dive to crappy nightclub when he was starting out; nobody handed the scrawny kid anything.)

Some also suspect that his being physically damaged at birth by forceps in the hands of a clumsy doctor, leaving a side of his face slightly disfigured, might have contributed to his compassionate nature. He knew life behind the mask.

Sinatra’s crowning philanthropic achievement was the Barbara Sinatra Children’s Center at Eisenhower Medical Center, devoted to helping abused children, a facility that in its nearly 30 years of operation has helped 18,000 young boys and girls work through their traumas. Not a single applicant has ever been turned away for lack of funds. Known today for its remarkable success, the center had humble origins. It began as other desert institutions have, with a little socializing when Barbara’s close friend, child psychologist Barbara Kaplan, told of the abuse cases she was seeing in her work. The film There’s Something About Amelia recently had played on TV, winning Golden Globes and bringing this previously taboo subject to public consciousness. Barbara, who was deeply moved by the stories, began a quest for funding at the top of the desert charity food chain. Walter Annenberg was well-respected for his generosity to many deserving charities, particularly the Eisenhower Medical Center. Before pulling out his checkbook, however, the former ambassador had a question for Mrs. Sinatra: Was she serious?

Annenberg underestimated his Thunderbird neighbors. For years, Barbara had raised money for causes she deemed worthy. And starting in 1988, the Sinatras dedicated themselves to another desert tradition: the golf tournament fundraiser. It was to be like few others the desert had seen. In 1989, Palm Springs Life published the program for the tournament, held at Canyon Country Club. Advertisers included national liquor brands and greetings came from fellow stars including Jimmy Stewart and anyone who wanted to get on the Sinatras’ good sides.

By 1991, the tournament had become a must-attend for any music or golf or charity fan in Southern California. Duffers came from all over the place. And Sinatra never disappointed; he always appeared and threw himself into the gala’s show. (That year he shared the stage with Liza Minnelli, the previous year with Steve Lawrence and Eydie Gorme.) Advertisers in the program included Izod, a Mercedes dealer, King World Productions, Yamaha Golf Cars, Cubby Broccoli, and Barbara and Marvin Davis.

The tournament became “Frank’s little party in the desert.” One of the highlights of the weekend was always the fashion luncheon produced by Barbara’s close friend, realtor Nelda Linsk, who managed to bring the hottest of haute couture to the runways every year.

Attendees marveled at the energy and meticulous care that Sinatra displayed at the gala’s performances. Many remember his final performance at the 1995 event. As he was announced, he hobbled onto the stage, a little unsteady … but when the band started the familiar Nelson Riddle arrangement of  “I’ve Got You Under My Skin,” Sinatra came alive. His voice strong, his phrasing perfect, and through five more numbers he thrilled the crowd in the same way he had since the old days at New York’s Paramount Theatre. Frank Sinatra still had that sly come-hither stare and closed the performance with the song “The Best Is Yet To Come.”

Bill Osterman, the tournament president, recalls talking to Frank as he exited the stage after one of these gala performances, the applause and cheers still ringing in everyone’s ears. “I complimented him on the performance, of course,” Osterman remembers. “You know what he said to me? ‘I want to tell you, Bill,’ Sinatra said, ‘If you can’t do it for the hometown crowd, you can’t do it for anybody.’ He loved Palm Springs so much, he rose to the occasion.”

Even in little ways. One time he gave a $100 tip to a valet parking attendant. When the young man thanked him profusely, Sinatra asked if he’d ever received a bigger tip. The valet hesitated, then sheepishly revealed that yes, in fact, he had. When Sinatra good-naturedly demanded to know from whom the bigger tip had come, the young man smiled and said, “From you, Mr. Sinatra. Last week.”