Natalie Portman Peels Back the Layers in 'Jackie' 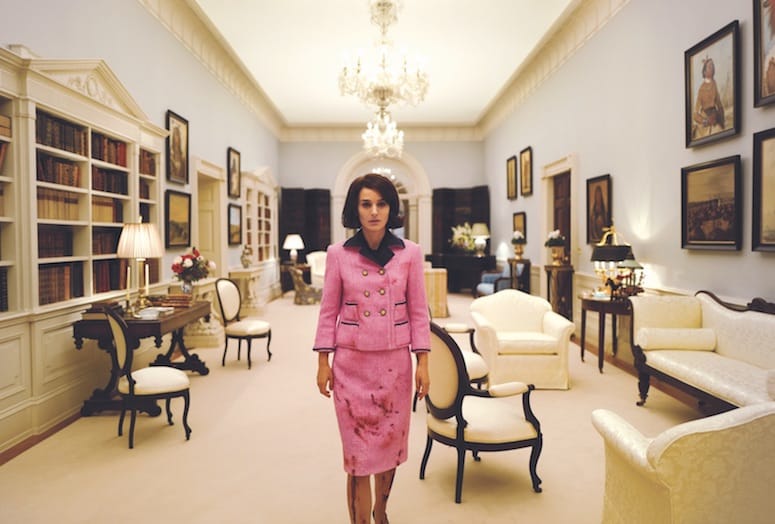 As an actress, Natalie Portman has proven herself many times, from her first role at age 11 in Léon: The Professional to her award-amassing turn — and leap, and arabesque — in Black Swan. But with the title role in Jackie, she treads on the hallowed ground of a 20th-century icon, Jacqueline Bouvier Kennedy, as if to the manor born. It’s a performance that alternates stillness, dignity, and a loss of control, as Jackie is plunged into grief while acutely aware of the eyes of the nation upon her.

The film, directed by Pablo Larraín, focuses primarily on the days after JFK’s assassination. His widow has to make arrangements for the funeral of the nation’s leader, take care of her children, and plan for her future, while being driven to move out of the White House by Lyndon Johnson and his wife.

It makes a certain kind of sense that Portman, 35, so deftly plays an icon known for her impenetrability. It’s a conundrum she navigates well herself. Portman has been a private person dealing with the public’s appetite for celebrity for decades.

Born in Jerusalem to an Israeli father and an American mother, she was raised in New York from the age of 3. As a child actor with extensive credits, including key roles in the Star Wars prequels, she took a break to attend Harvard University before returning to the screen. She married French dancer and choreographer Benjamin Millepied, whom she met while working on Black Swan. They have a 5 year-old son.

The family moved to Paris for two years while Millepied helmed the Paris Opera Ballet. During that period, Portman adapted and directed her first feature, A Tale of Love and Darkness, in which she also starred. She shot the Hebrew-language film in Israel, to best serve Israeli author Amos Oz’s memoir. The film premiered in the U.S. in the summer of 2016 to generally positive reviews. 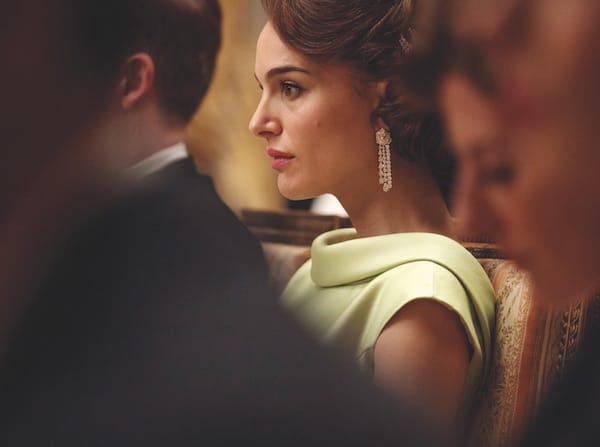 PHOTO COURTESY OF FOX SEARCHLIGHT PICTURES
Despite her extensive body of work, Natalie Portman had never assayed a character, a person, like Jackie.

Portman and her family have since moved back to the U.S. and now live in Los Angeles. The news that she is expecting another child was revealed on the red carpet in September by breathless “baby bump” headlines and subsequently a publicist’s confirmation.

Portman spoke to Palm Springs Life over the Thanksgiving holiday weekend. She parried questions diplomatically, deflecting topics she’d prefer not to tackle. Asked about Kennedy-era ideals and decorum in light of the current political climate, she responded simply: “This country has seen many dark times, and has always pulled through.” (And the film makes the sharp point that extreme political divisiveness is, sadly, nothing new to this country.) On the other hand, she was happy to talk in depth about the role of Jackie K.

Despite her extensive body of work, she had never assayed a character, a person, like Jackie. “I was nervous about portraying someone so well-known in terms of how they look and how they sound, because it was something I’d never done,” she said. “I really didn’t know if I could do it.”

“When you see what she went through as a
human being, you can’t help empathizing
with her on a human level. That makes it much
easier to not feel like there’s this image
and aura that precedes their humanity.” 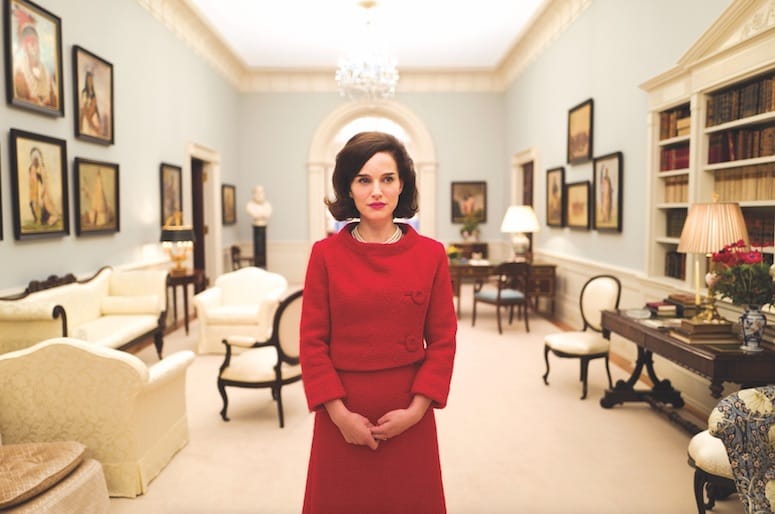 She credits screenwriter Noah Oppenheim with seeing through the icon to the woman. “When you see what she went through as a human being, you can’t help empathizing with her on a human level,” she said. “That makes it much easier to not feel like there’s this image and aura that precedes their humanity.”

Oppenheim approached Jackie through her relationships, which makes the story feel intimate and immediate. “He never made it feel as performative as it could be with someone so iconic. You see her with her children, with her best friend Nancy, with her priest, with Bobby Kennedy, and then of course you get to see the other side, when she has to be more public, with the White House tour, with the reporter. You can see both sides; you can see how conscious she was of having these sort of multiple personas.”

The character has layers upon layers; shy yet canny, a pleasant political wife with a steel-trap mind, who is at once vulnerable and calculating. And through it all, she has, as Portman puts it, “the presence of mind, in the face of unimaginable tragedy and trauma, to craft this legacy and really focus on the image she was creating for the country.” Camelot was Jackie’s gift to her husband.

With little time to prepare before filming began in France, Portman dove into research, calling it “very much a YouTube experience,” watching Jackie’s interviews when Kennedy was campaigning and her televised White House tour, as well as reading biographies and transcripts of interviews. The film’s events are interwoven with scenes depicting an extended interview Jackie agreed to with an unnamed reporter shortly after the funeral, as she wields control over the story he may or may not publish.

Portman even noticed a change in Jackie’s diction between the public voice on television interviews and the private voice on tapes recorded with historian Arthur Schlesinger Jr. “They provided a glimpse at the private Jackie,” the actress said of the audiotapes. “The timbre of her voice was a bit different, her sense of humor stronger. You could hear the ice in the glass, knowing she was drinking.”

She worked with a vocal coach to create Jackie’s inimitable voice. Well, not so inimitable. The actress is physically astounding in the role, from speech to gait. Of all the exterior elements that made up her character, she said the wig helped her the most. “As soon as it was on, I felt I could be believable in appearance.” Yet there was never a moment where she thought, “I’ve got this.” 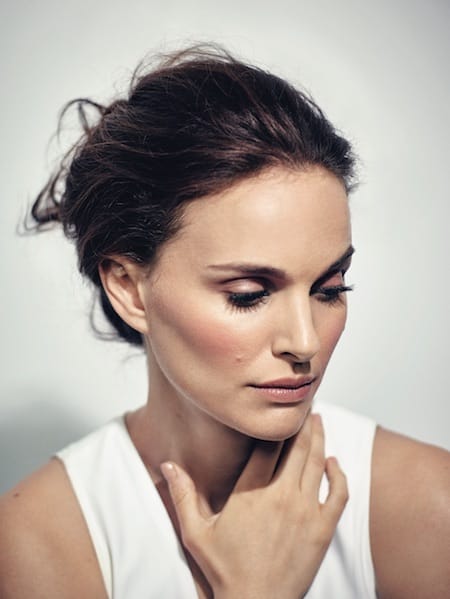 “I don’t think I ever feel that,” she said, laughing, “but I loved going to work every day. It was an incredible creative experience, and that’s really rare to have that energy where everyone feels so connected on set.”

She attributes that energy to Larraín’s radically collaborative directing methods. “The biopic genre is very, very challenging to do well. I had good instincts about Pablo, our director,” she says, but the feeling on set doesn’t always translate to the finished product. This was a lucky combination. “Pablo has a very special, unique combination of really having a very specific vision and direction, and being able to guide you, but also leaving a lot of room for surprise and collaboration and improvisation. He requires you to engage, which is fantastic; it’s such a nice feeling to be invited into that kind of experience.”

He lit the rooms of the White House set in such a way that the actors could walk wherever they wanted in their scenes, often without needing to hit a mark. Cinematographer Stéphane Fontaine was also the primary camera operator, and he improvised with the camera as well, “so it gave us a lot of freedom in terms of what we could do as actors.”

Larraín also asked the actress to treat every scene as if it could appear at any time during the film, so that there was no set chronology. “It was somewhat challenging as an actor as there wasn’t a particular arc to track, but it made it feel much more like real grief — that memory intrudes, or anger, or fantasy.”

“Pablo has a very special, unique combination
of really having a very specific vision
and direction, and being able to guide you,
but also leaving a lot of room for surprise
and collaboration and improvisation.
He requires you to engage .”

The manner of filming underscores the dark whirlwind Jackie finds herself in during this daunting personal and historical moment. She is hemmed in by the crushing weight of what’s happened, yet, at the same time, she is oddly free. We see this exceptionally private woman in a way we’ve never seen her before. “It was very liberating, especially this moment she’s alone in the White House, and you see her roaming the halls, being by herself. It’s great to have that freedom to do anything, and not have to hit a mark.” 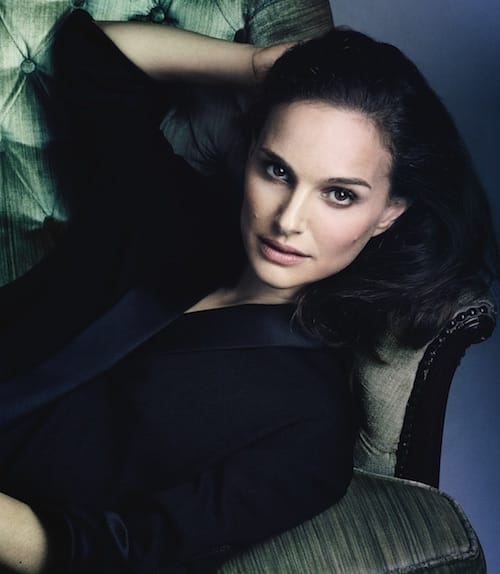 In one brief, telling scene, security men serve as silent, still witnesses to Jackie’s grief as she wanders by, wearing finery from her previous life that dissipated in a single moment, clutching a cigarette in one hand and a drink in the other. “It is really moving to see her in this space, and in many ways never alone and yet having to deal with her own very private, very extreme grief.”

Another scene managed to replicate a piece of film that everyone knows too well — the Zapruder footage of the assassination. “It’s very challenging to do something so extreme emotionally when there is a very well-known film of the exact way she moved physically and facially,” Portman said. “And of course it’s a gruesome, awful event that I’m lucky I only had to act, but still is dreadful to reenact.”

In a horrific parallel to this national tragedy, the principal photography for Jackie began in Paris soon after the Nov. 13, 2015, attacks on the city. “It was a very dark time, to be sure,” Portman recalls. “It gave a sense of the collective trauma and fear that occurs after an event like the assassination or a terror attack, where an entire nation is grieving and afraid at the same time.”

Security men serve as silent, still witnesses
to Jackie’s grief as she wanders by, wearing finery
from her previous life that dissipated in a single moment, clutching a cigarette in one hand
and a drink in the other.

While Jackie is trying to figure out how to stage the funeral, she’s also trying to grasp who she is to become. “She’s not the first lady anymore, she loses her identity,” Portman said. “She loses her name and title, and all of these identifying aspects.” Among all the people she turns to, it is her childhood friend and lifelong aide Nancy Tuckerman (played by Greta Gerwig) who reignites Jackie’s sense of self.

Portman’s understanding of Jackie’s character grew throughout the filming. “I came to really admire her awareness, that she meant something publicly, that how she behaved publicly mattered, even at a moment of tremendous difficulty for her privately. Because I tend to think when you’re dealing with something privately, no one has a right to intrude upon that. But when you’re a public figure, you have to acknowledge at some point that the public shares in your joys and sorrows.”

The actress’ own joy will be on public display at the Palm Springs International Film Festival. She won the Desert Palm Achievement Award in 2011 for her performance in Black Swan; the festival is presenting her with the same award this year. “I had a wonderful time,” she said of her previous experience in the desert. “It’s an incredibly lovely festival, and I am honored to be included this year.” It may again serve as a bellwether of what’s to come; last time around, Portman went on to win the Academy Award.