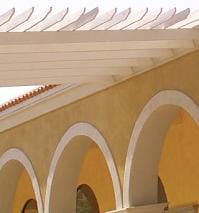 Having woken up and shaken off its sleepy image, Cathedral City’s downtown appears to be greeting a new day — one that brings growth and development. With six stories, 300 rooms, and 24,000 square feet of conference space, the Sheraton at Desert Cove Resort will stand as one of the most visible signs of this transformation when it opens in late 2006.

"Historically, Cathedral City has been a bedroom community for people who work in the tourism industry," says Paul Shillcock, the city’s economic development coordinator. "We have never been a player ourselves. This will change that." Starwood Hotels, the parent company of Westin and Sheraton, will manage the resort. The city has set up a nonprofit corporation that will own the hotel, which will be built with revenue from the sale of tax-exempt bonds."The big reward for the city is the bed tax, which goes directly into local coffers," Shillcock says.

A number of distinctions will set the new hotel on Highway 111 apart from other lodging options in the area."There is no Sheraton in the desert, and every chain has its core group of customers," Shillcock says. "It is a conference-center hotel targeting groups of 150 to 200, and only one other hotel in the area does that. Also, it will most probably be a unionized hotel, and certain groups will only stay in a union hotel. We expect that we will attract groups that are not coming to the desert."

The hotel and conference center will abut a public, 18-hole golf course designed by Schmidt-Curley, which also designed the Marriott Shadow Ridge and Plantation courses. The links-style first half of the course will lie on the desert floor, and the back nine will wind through the lower Cove area, making it the only publicly accessible golf course in the foothills.

A pedestrian bridge will connect the course with the five-story "condotel" at Plaza de Oro. Plaza de Oro will include 165 residences, most with two bedrooms, priced at $300,000-plus. Rental revenue will be split between individual owners and management. Condotels are fairly common at East Coast ski and beach resorts, but less so in the West, Shillcock says. The Plaza de Oro development will also include a four-story retail office-space complex with an In-N-Out drive-in and another restaurant yet to be named.

Tri-Millennium Properties announced in April that it would build a 160-room Hampton Inn & Suites within a mile of the Sheraton site and a couple of blocks from City Hall. The 77,000-square-foot, limited-service hotel will benefit the city in significant ways, says Charlene Sumpter, redevelopment manager for Cathedral City’s Redevelopment Agency.

Some hotel guests will want to attend the nearby IMAX and Mary Pickford theaters and visit the downtown’s new retail center, The Shops, Sumpter predicts. The Shops will have an official grand opening Oct. 7-9, with prizes and family entertainment. Phase I encompasses 22,100 square feet in four buildings. Tenants already open for business include a Cold Stone Creamery franchise owned by Richard and Judy Hallett, who own five others in the valley. They said they wanted one in downtown Cathedral City because of the location and the area’s beauty.

Hi-Lites Aveda, the only Aveda lifestyle salon in the valley, belongs to Darla Di Grandi-Aguilera, a lifelong citizen of Cathedral City and daughter of its first elected City Council member. The full-service salon and day spa includes body treatments, nail and skin care, and a 1,000 square-foot retail store. Doug Clemens, who moved his jewelry boutique, Sausalito, from Palm Springs to downtown Cathedral City, says he loves the demographics and looks forward to foot traffic from the theaters.

Marilyn Estenson and her son, Brian, opened Vino 100 to make shopping for affordable fine wine enjoyable. The store features a themed complimentary wine tasting on the third Monday of each month. The downtown Xpress Wireless store makes eight locations for owner Kirk Weiss. The store carries products and services from Sprint, Nextel, Verizon, Cingular, T-Mobile, Boost, and Virgin and offers seminars on phone use and the Treo 650 handheld organizational device.

Beverly Hills restaurateur Giuliano Gallo will open Trilussa Ristorante this fall, featuring open-air dining, classic Italian dishes, and views of the remodeled downtown central plaza. Not surprisingly, the new center has a Starbucks as well, so you can try out the new mint mocha chip Frappuccino.

"This new heart and soul of Cathedral City differs from other desert communities," says Bijan Shahmoradi, president of The Shops developer Tri-Millennium Properties. "We will become the center of life, the spirit of the desert, a place of welcome and respite, of comfortable sophistication, of creative fun — a place that embraces and celebrates all facets of our people."