Oysters Are Great Year-Round, Not Just a Few Months 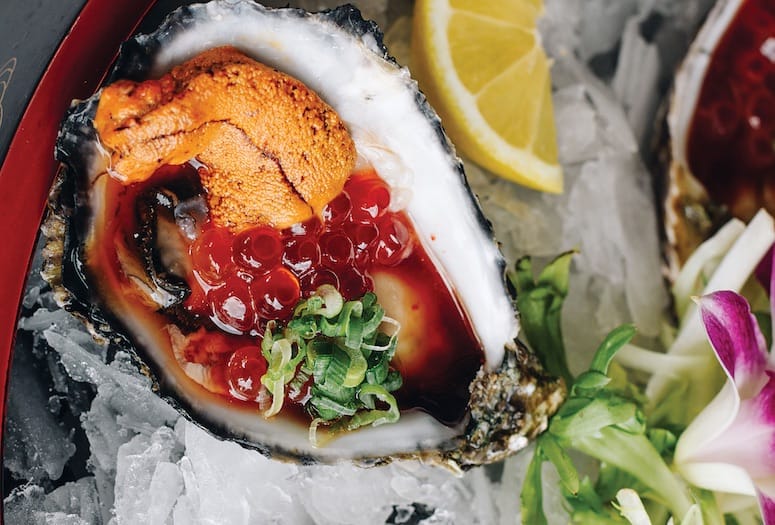 Any conversation about indulging in oysters in the desert, especially in the sultry summer months, should start with a good measure of myth busting. First off, that old rule of thumb about only consuming the sharp-edged shellfish during months with an “r” in their names — in other words, not during the hottest stretch of the year — no longer holds true.

The advice actually dates back to the days when most oysters were harvested in the wild and warmer ocean waters created algae blooms that could be toxic to shellfish like oysters. Today, however, almost all commercially available oysters are cultivated on sustainable open-water aquaculture farms that are rigorously regulated. “That’s now just an old myth,” says Rigo Bojorquez, an executive sales representative for distributor Santa Monica Seafood, which works with dozens of restaurants and retailers in the Coachella Valley. “There’s more testing and stricter regulations. Beautiful oysters are available year-round.”

And those who balk at ordering raw seafood in the desert, a solid 100-plus miles from the closest ocean, might be surprised where to they can find excellent oysters. “People have a misconception that if you’re closer to the water, you can get fresher seafood, but you’ve got lots of restaurants out here in the valley that are getting fresh seafood delivered daily,” says Bojorquez, who adds that about 85 percent of the fresh seafood the company receives comes in via plane.

Ready for an icy platter of the meaty mollusks? Here’s everything you need to know to slurp your way through summer.

You’re more likely to see Pacific oysters on area menus, but some chefs have a soft spot for the East Coast varieties from the Atlantic, the saltiest major ocean in the world. “Everyone has a preference,” says New York native Stephen Wambach, chef and owner of SMW Inspired, a Coachella Valley-based catering and private events company. “I love a briny oyster, and East Coast oysters are typically a lot brinier.” As for what exactly briny, that oft-used oyster description means: “When people talk about briny, they mean that sweet, sharp ocean flavor that comes from the salinity in the water. They’ve got that sea water kick to them.” Wambach often incorporates his favorite type, Wellfleets from of the Cape Cod, Massachusetts, among others into the raw bar spreads he assembles for clients. “You don’t want to put anything on them,” he gushes. “The flavor is just so good.”

Mitch’s on El Paseo Prime Seafood rotates in three types of Pacific oysters for the raw oyster plate and shellfish sampler the Palm Desert restaurant has on the menu, including petite Kumamotos from Washington state; the more recent addition of a Sanctuary oysters from Baja, Mexico; and chef Kelly Walling’s favorite, Fanny Bay oysters from British Columbia. 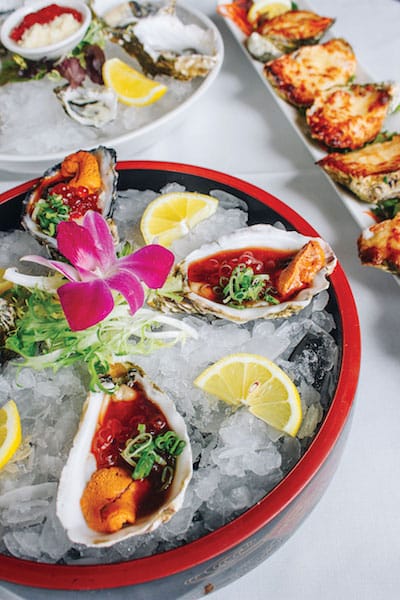 “They’re super consistent and firm. Their brine is mild, and they’re not too salty,” he says. “Our clientele just really likes the West Coast oysters.” And each year, that shellfish-loving audience seems to grow, he says, adding that Mitch’s now goes through around 800 oysters a week during high season

Smaller varieties can be less intimidating for the uninitiated, so they’re often recommended for newbies to raw oyster eating. Those Kumamotos, which originated in Japan but are now cultivated up and down the West Coast, are probably the best known of the smaller species at about 1 to 2 inches long. “They’re creamier and they’re softer,” Wambach says, “and a lot of people like them because they’re smaller.”

Less, however, can mean more when it comes to price. “Some oysters can go out to market in 12 to 16 months, but others like a Kumamoto or a Kusshi [another smaller oyster that’s raised in British Columbia] are very slow-growing and can take up to 24 months to be harvested,” Bojorquez acknowledges. “People think, ‘It’s a little tiny oyster. Why is it so expensive?’ It’s not the fact that it’s tiny. It’s the fact that it took so long to grow out.” The extra time in the ocean gives the little guys more minerals and flavor. “That’s why a lot of people rave about them.”

Medium oysters like those top-selling Fanny Bays or Minterbrooks from Washington’s Puget Sound are often chefs’ — and diners’ — favorite-sized specimens, the perfect middle ground because they offer a meatier texture without being too unwieldy. Walling says, “On the half-shell, I really like oysters that fall somewhere in the middle.”

Most chefs leave large oysters that have grown beyond 4 inches for grilled and baked options like a plate of buttery, bubbly Oysters Rockefeller. “An oyster, if it’s grilled or charred, will shrink in size, so big ones are great for that,” Bojorquez says. “You don’t want to cook smaller ones or you’ll end up with just a little morsel of meat.”

“An oyster with deeper cup will be more plump,” says Wambach, referring to the bottom half of the shell that cradles the meat that most oyster lovers don’t consider. It’s important to remember that the meat inside an oyster grows deeper, not flatter.
“Deeper cups definitely hold the ‘liquor’ [the natural juice within the oyster] better,” Carlos Cardenas, a partner and vice president of sales and marketing for Sanctuary, a Baja, California-based oyster farm that annually produces more than 9 million oysters. “In Baja, the liquor tends to be brinier because we don’t get the rain Washington does, so there’s more salinity in the water and you get to taste that upfront.”

It may sound silly, but the oh-so-fun act of slurping means many oyster eaters forget to chew, losing the opportunity to fully take in the taste and feel of the meat. “I like to pick it up, make sure it’s loose, and slide it into your mouth, then I think one or two bites is perfect,” Walling says. “You get all the flavor, texture, and experience.” 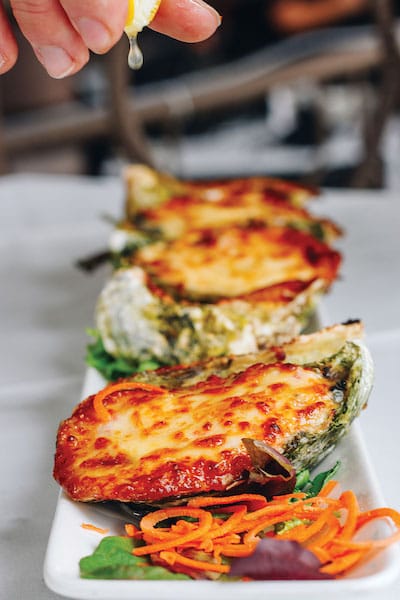 Oyster experts share go-to condiments for jazzing up every oyster under the summer sun.

Rigo Bojorquez is a fan of the classic accouterment made with vinegar and diced shallots. “I always say have something with acid, like vinegar. It cuts back on the saltiness of the oyster and balances it out.”

Stephen Wambach recommends dicing up some peppers or shallots and quickly pickling them in cold rice vinegar and a little mustard seed, sugar, and salt. “Let that sit for few hours, then take that with a slotted spoon and put it on your oyster. It provides a little bit of crunch with that soft oyster.”