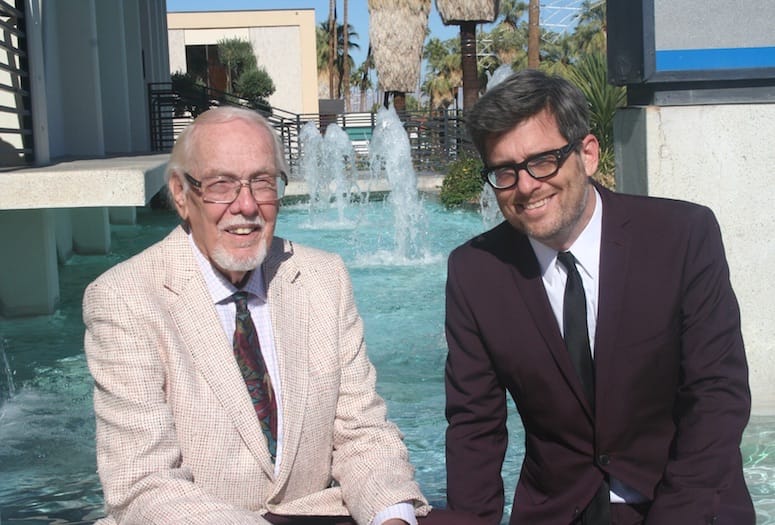 For two decades, Ken Steele kept his singing voice to himself. But when he moved to Palm Springs in 2002, he stepped in front of the microphone again with his soft bass voice and began performing at live music venues like Vicky’s of Santa Fe and Woody’s Palm House.

“It took me a while when I got to Palm Springs to be able to get my voice in shape doing exercises, and scales and things,” Steele says. “But once I did, then I started working regularly, and it's just sort of carried on. My voice is as good as it ever was, probably. I don't know why, because not many people can say that.”

Right up until the coronavirus pandemic shutdown in March, Steele was logging 3-4 gigs a week — a number quickly put into perspective considering he turned 91 in July. While the pandemic has put a stop to live performances, Steele has been able to remain connected to audiences with the recent release of a CD he collaborated on with Riverside jazz guitarist Peter Curtis. Aptly titled Steele in Love, the collection of 13 songs is available on Amazon, iTunes, and CD Baby.

The duo had collaborated before at Palm Springs nightclubs, but it was Curtis who approached Steele about recording a CD after his significant other Sophie suggested the idea when she heard them perform together. “I was immediately enamored with Ken’s beautiful singing the first time I sat in on a gig with him in Palm Springs,” says Curtis, who has recorded a pair of his own CDs, Christmas With Your Jewish Boyfriend and Swing State.

“It sounded to me like Ken’s voice was coming from another era,’ Curtis continues. “He doesn't sound like a singer of today to me. It's not like an elderly person with physical limitations from that era. He sounds like a singer from that era in his prime, or close to his prime, and that, I think, was a huge part of what attracted me to Ken's singing.” 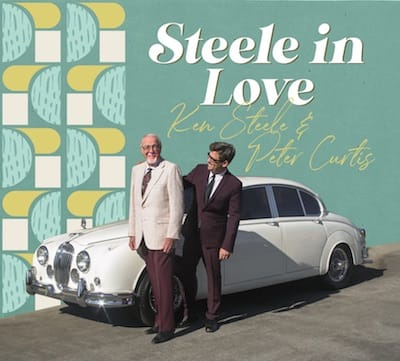 Steele spent the first part of his life using his voice to make a living in his native Canada. The only other time he recalls his voice landed on a CD was from a collection of air checks from radio and TV shows while working for the Canadian Broadcasting Corp.(CBC) in Toronto. He appeared on Canadian TV one summer as a summer replacement for Robert Goulet in the 1950s, sang on the side with his own band, and eventually took a position within the CBC as a music copyist. Steele says he was responsible for writing the individual parts of a musical score given to him by an arranger.

That stint led to an opportunity to write for musical shows through Jimmy Dale, an arranger and composer who had moved to California. Steele and his family followed in 1979, and initially he tried to continue as a music copyist, but the “production line” atmosphere turned him off. “You would sit in a room with a bunch of guys, elbow to elbow, and they would pass scores along, and you would write eight bars on the page, and then they would pass you another score, and you'd write another eight bars on a page. It was like a production line. I hated it, so I quit,” Steele says.

"I found myself thinking, yeah, I am glad that I can be a part of helping create something that will hopefully live, or has the potential to live on after Ken does, that can demonstrate his artistry in his later years.” 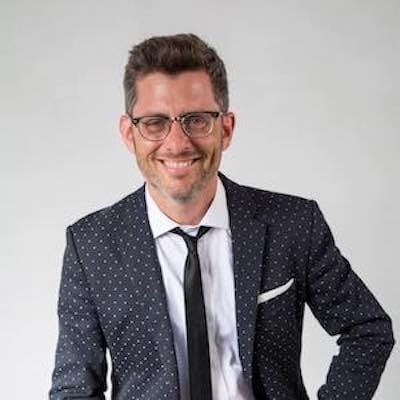 Steele and his wife even tried their hand at hotel ownership, buying the Mira Loma Hotel on then Indian Avenue in Palm Springs with friends after hatching the idea during one of their Easter break getaways to the desert. “We were sitting around our motel in Palm Springs, and saying, "Gee, wouldn't it be nice to own a place like this?" We were both freelancers in Toronto, so we could sort of pick up and do what we wanted. So we moved to Palm Springs in the fall of 1979, and ran the place for a couple of years. We had a nice clientele, but it was small (13 units and they lived in two of them),” Steele recalls.

He reconnected with a couple of friends in Toronto who were TV writers, and they gave him some small writing assignments that eventually blossomed into a seven-year career as a situation comedy writer. His most notable show was Head of the Class, which ran from 1986 to 1991 starring Howard Hessman. He also wrote for Zoobilee Zoo, a children’s show that aired from 1986-87 hosted by Ben Vereen and owned by Hallmark Properties. Finally, he wrote for Shari Lewis and her cast of puppets for the series, Lamb Chop’s Play-Along (1992-1997), which earned Steele an Emmy in 1994 for outstanding writing in a children’s series.

It’s singing, however, that Steele attributes for keeping his career going into his 90s. A heart attack three years ago could have sidelined him, but a month later he was back performing.

“I always promised myself that if I got to the point where I was embarrassing myself, I would quit,” Steele says. “Unfortunately, it hasn't reached that point yet (laughing). But singing, I would recommend it as something to extend your life, to keep you happy and vital. Singing is really good for your mental state and everything. I have a friend in town who is also a singer, and we agreed that... He's almost as old as I am, and we agreed that it's music that keeps us around. I think that's the secret of my longevity, really.”

When Steele agreed to collaborate with Curtis, they agreed on jazz standard songs from the 1930s and ‘40s that are part of Steele’s nightclub repertoire. Curtis brought in bass player Baba Elefante to assist on some of the songs, and together they let Steele set the tempo.

“I always was allowing myself to let him set the pace, let him set the mood, and for me to try to follow the mood that he was creating,” Curtis says. “What's so lovely, I guess, about any kind of collaboration is that, when somebody influences you to go in directions that you wouldn't ordinarily go in, if going in that direction brings out something in you that you didn't know was there or weren't expecting to be there, and that's frequently what happened with Ken. I would find myself adapting to suit him, and then find myself to be surprised and happy with how I was playing.”

The last song on the CD, "You’re Not There” is written by Steele that is likely dedicated to his wife, who passed way from pancreatic cancer after 57 years of marriage. Music let him continue to speak to her through the CD, and Curtis says being part of the recording experience will stay with him.

“A couple of people said to me that they were happy that I was doing this for Ken,” Curtis says. “And it was funny because I hadn't really thought of me as doing it for Ken. I wanted to collaborate with him. I loved his singing. I thought it would be an interesting project. But then, subsequently, I found myself thinking, yeah, I am glad that I can be a part of helping create something that will hopefully live, or has the potential to live on after Ken does, that can demonstrate his artistry in his later years.”

Music can create a powerful connection between people, and perhaps that has never been felt more as they navigate their way through the pandemic.

“If there can be any silver lining to this horrific pandemic, I'm happy to participate in it in any way that I can, and so, I hope you're right,” Curtis says. “I hope that music can be something that brings people some comfort in this difficult time, and I hope that we have an audience for this recording, and that the audience is given some comfort.”

For more information on Steele in Love and Peter Curtis, visit petercurtismusic.com.