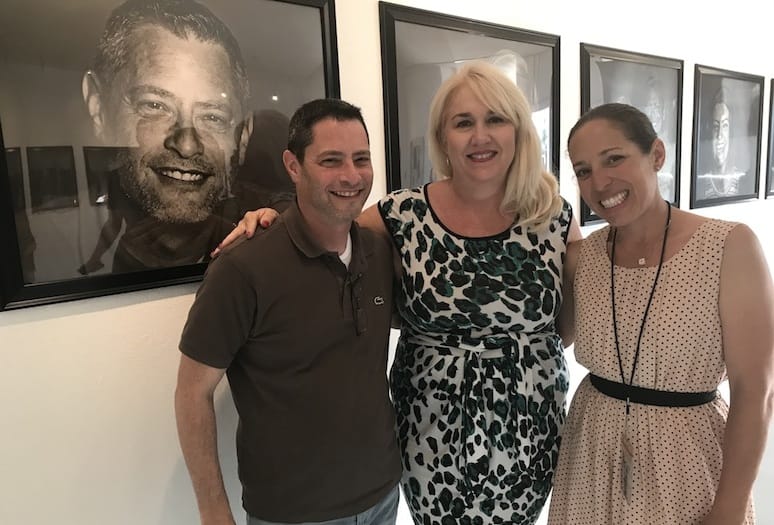 When photographer Chari Godakanda agreed to be the artist-in-residence for a joint venture between Palm Springs Unified School District (PSUSD) and the city to showcase the city’s diverse community in photos, he drew from his own background.

Born in Sri Lanka, a tiny multicultural island outside of India, to a Catholic mother and a Buddhist father, Godakanda says, “We had some great conversations about religion growing up.”

Through his professional photography experience, Godakanda learned that every face can tell a story. Now it was his charge to engage five Palm Springs High School students to capture the city’s diverse community in a single photo exhibit.

“Portraits of a City,” the recent student photography exhibit held June 8–10 at the Julianna Poldi Gallery at the Backstreet Art District in Palm Springs, showcased 20 black-and-white portraits of local residents.

“The time seemed right for the theme of this project now that our country is so politically divided,  says Louisa Castrodale, arts coordinator at PSUSD.

Godakanda and Castrodale teamed with Jennifer Henning, public arts coordinator for the City of Palm Springs, on the photo project. Through teachers, they attracted five students, all juniors interested in photography, to work before and after school on the project. The quintet included Sandra Sarabia, Liza Anaya, Pamela Gemora, Vanessa Rodriguez, and Yarely Palacios. Photography is not part of PSUSD’s regular curriculum, so it was a big attraction, Castrodale says.

Instead of handing out digital cameras for the students to use, they used Godakada’s Canon DSLR, and the same background for all of the pictures. “We chose a plain gray background because it looks great, whether you are black, white or brown,” Godakanda adds.

To look for subjects, a booth was set up one night at Villagefest, the weekly street fair on Palm Canyon Drive in Palm Springs, and two weeks later outside Godaka’s studio at Backstreet Art District in Palm Springs. “We wanted to mix it up. We needed faces, and not models,” says Castrodale. 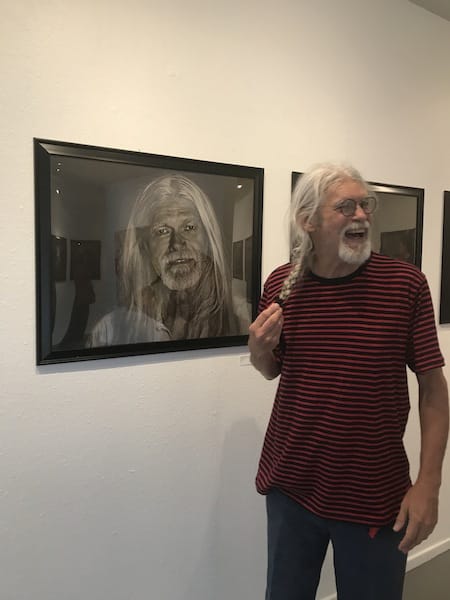 One subject admires his portrait at Julianna Poldi’s gallery at the Backstreet Art District.

They were easy to find, Godakanda adds, but then the students had to talk to each of them, and build their trust so they could obtain a more natural portrait. “This wasn’t easy for teenagers who can be a bit awkward and shy,” he says. “But they did a great job.”

Castrodale, Henning, and Godakanda served as the judges, and whittled down the 50 photos to the final framed 20.

With the final 20, the students went into the lab at Palm Springs High School and changed the images from color to black and white, and then tweaked them using PhotoShop software. “But not too much,” says Henning. “They added mostly highlights, but as you can see, they kept the essence of each person intact.”

Afterwards, each photo received the same black wooden frames and glass treatment. “Framing is an important part of the whole art showing process,” Henning explains. “We wanted to teach the students that the final presentation is just as important as their photographs.”

Eva Gradilla, whose own photo and that of her young son made the cut. Gradilla is open mouthed and laughing without makeup. “I had just worked out, but I wanted to support Chari and this project,” Gradilla says.

She commended Gamora, with making her feel at ease. “She asked me to give her mad and aggressive expressions, and then she surprised me,” Gradilla says. 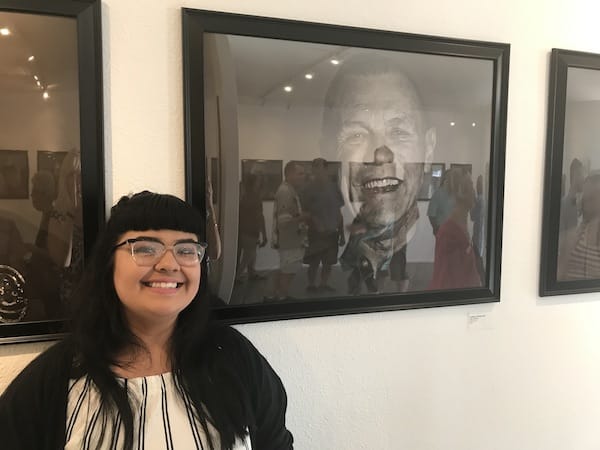 Liza Anaya was one of five Palm Springs High School students to participate in the portrait project.

Castrodale asked Palm Springs police officer Henk Peeters, who was working at Villagefest, to participate. “He was reluctant at first because he was on duty,” Castrodale says. “But the photo (by Sarabia) reveals such a warm approachable person that he is.”

With the popularity of this exhibit, it’s going to be traveling, adds Castrodale. “We would like to show it at Palm Springs High School in the fall when school resumes, and it may even be shown at a city office later in the year,” Castrodale says.

Julianna Poldi, whose gallery in the Backstreet Art District bears her name, says she was happy to offer her gallery space for the student show when Henning asked her. “It’s good to have a professional space to show a student art exhibit like this one,” Henning adds. “That way, the students can see what’s possible.”

“It was super fun and exciting to see the finished photos,” adds Anaya, one of the five student photographers. “I had no idea it would turn out like this!”