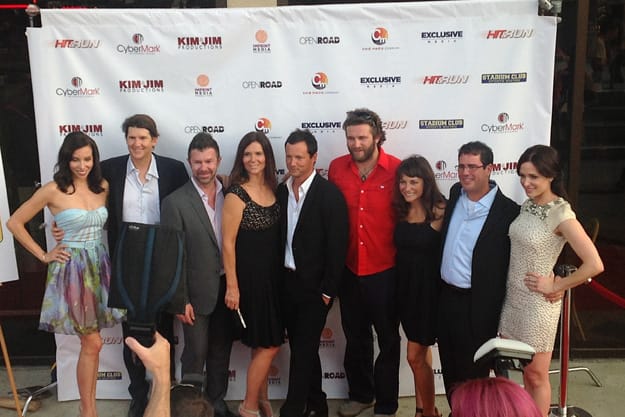 The film tells the story of a former getaway driver who risks his life and his witness protection program identity to help his girlfriend get to Los Angeles.  On their way, Charlie Bronson, played by Dax Shepard, finds himself chased by the feds and members of his former gang.

That prestige drove up to the Regal Cinemas in Palm Springs delivering the Palm Springs celebrities in a stretch limo.

As they emerged, the crowd who braved the heat and humidity waiting outside applauded and yelled, "Go Jim!  Go Kim!"

Behind them, another limo carrying Director David Palmer and co-producers Howard Young and Nate Tuck arrived with Palmer welcoming everyone into their conversation.

Casey's experience as president and CEO of Integrated Wealth Management, which manages many aspects of the SAG-AFTRA growth and giving programs, keeps him close to the Hollywood vibe.

Waltrip's achievements as a model, actress and producer provide the insight into how the "entertainment machine" operates.

With Hit & Run, the team stepped on the red carpet ready to shine at the Palm Springs premiere.

"We're excited!" Waltrip told Palm Springs Life. "We're going to stay excited until someone tells us not to."

That excitement spread to the entire crowd who lined up to have their pictures taken with Waltrip and Casey on the red carpet.

The crowd was so big Waltrip's father had a tough time getting to the front of the red ropes to take a picture as "proud papa."

If you ask Casey, it sounds like Waltrip's father better get used to waiting.

"We have three more coming next year," he said.  "Did I count right?"

Old Days, currently in post-production, tells the story about a man who goes back home to his high school reunion to find satisfaction with his life.  He ends up rallying his old classmates to seek revenge on his abusive high school principal and falling in love with the one he left behind.

After the City of Palm Springs proclaimed it "Jim & Kim Day" and the proud producers screened Hit & Run to the heavy-hitters of Palm Springs, the action turned into a sneak preview of a hot spot yet-to-open.

The Stadium Club, on Highway 111 in Rancho Mirage, will feature very large screens for sports aficionados and special events — events like toasting a motion picture premiere and continued success — something this pair appears more than prepared for.