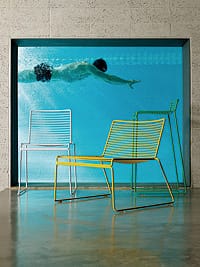 Devotees of the furnishings catalog must have noticed the photo-shoot locations in the winter editions looked awfully familiar. Those same locales have appeared in our own pages within the past year: the stone walls of the 1957 E. Stewart Williams-designed Kenaston House in Rancho Mirage, the signature yellow-and-white-tiled walls of Viceroy Palm Springs, the picture window in the Greenbaum home that peers into the swimming pool. There was no mistaking these and other local architectural and design icons. In its 52 pages, the catalog also featured Richard Neutra’s 1946 Kaufmann House in Las Palmas and Frank Sinatra’s Twin Palms Estate built by E. Stewart Williams in 1947.

While it should be flattering that the high-style company and its savvy art directors think so highly of the Coachella Valley, it’s easy to feel a bit slighted that they have enjoyed our photo-perfect sunny days and capitalized on our architectural aesthetic for the past two years without setting up shop in the area. (A sign in an Indian Canyon storefront declaring DWR was moving in was removed.)

“You can’t be in the [design] business and not know about Palm Springs,” says Art Director Michael Senado, who attends the modern house tour every year. “There is even more here than you know and read about. It has so much to offer in a relatively small area, compared to Los Angeles and Miami, which are more spread out and difficult to get around. Palm Springs is a small big town.”

Senado says the people he and his crew met during more than two weeks shooting here in January were welcoming and easy to work with — albeit armed with one question. “Almost everyone was asking [when we were opening a studio in town],” he says. “Only one or two of the houses we shot in didn’t have something they’d purchased from us.”

According to Senado, issues with the landlord prevented the Indian Canyon location. The company has been in talks with a developer and scouted for space in Palm Desert. It usually chooses locations with architectural significance or an interesting history. “Palm Springs is definitely on the radar for us,” Senado says. “It’s important to make sure our stores feel like part of the community. A lot of flux going on [in the area] makes it hard for us to nail that down.”

For now, DWR’s midcentury-minded shoppers must pick up the phone or order online. Maybe it’s for the best. Several local showrooms carry some of the same lines, and smaller businesses appreciate the business.