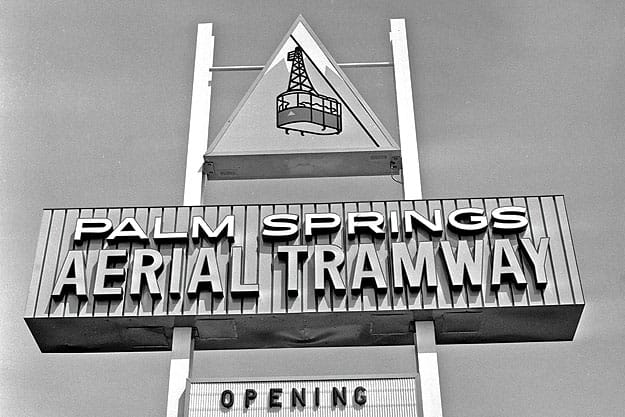 Then: Newspapers and local officials criticized Francis F. Crocker’s idea to build Palm Springs Aerial Tramway in the rugged Chino Canyon in the San Jacinto Mountains, where helicopters erected four of five towers in one of the greatest engineering feats ever. The flying bulldozers completed more than 23,000 missions and realized Crocker’s dream in 1963. The result: a fascinating attraction that takes visitors from the warm-to-hot desert floor to a cool-to-cold alpine peak overlooking Palm Springs and beyond. Then: In 1974, community leaders discussed plans for a state-of-the-art theater for entertainment and education. A fundraising initiative netted a who’s who list of donors that included President Gerald Ford, and Fred Waring staged 13 sold-out fundraising performances. Fifteen years later, McCallum Theatre opened to the public and Bob Hope was center stage, hosting a star-studded NBC special for all of America to see. In later years, Oprah Winfrey and Elizabeth Taylor also broadcasted from the theater.

Now: The red curtains have lifted for performers spanning generations, from George Burns and Johnny Cash to Jennifer Hudson and Janet Jackson. McCallum Theatre is in its 25th anniversary season. In addition to record-setting ticket sales and a rich variety of programming, McCallum also has a model education program and an excellent choreography festival. Then: Marilyn Monroe fell in love with the heat while sunbathing at the Racquet Club in 1947, when Hollywood photographer Bruno Bernard snapped flirtatious photos of the then-unknown 21-year-old. Marilyn regularly returned to the resort, where she met Johnny Hyde of William Morris Agency. He catapulted her career with two big-screen productions and a 20th Century Fox contract. Aside from her fun in the sun at the Racquet Club, the young actress shared a love nest with Joe DiMaggio in the Movie Colony and had a 1950s bungalow-style home in Las Palmas.

Now: Recalling Marilyn’s words (“My work is the only ground I’ve ever had to stand on. I seem to have a whole superstructure with no foundation”), Palm Springs hoteliers came together to bring Seward Johnson’s three-story-tall Forever Marilyn statue to Palm Springs through summer 2013. Visitors line up to snap photos of the statue at all hours of the day. Retailers are capitalizing on the buzz, and programming — from home tours to film screenings — is proving beyond a doubt that Marilyn is forever.