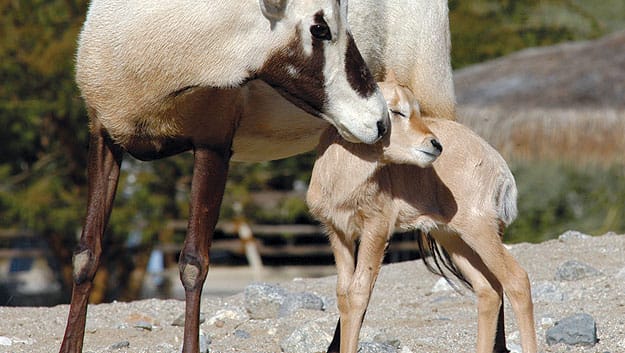 Among about 200 accredited zoos nationwide, fewer than a dozen have taken part in initiatives to put animals back in the wild, according to Stacey Johnson, president and CEO of The Living Desert Zoo and Botanical Garden.

The Palm Desert park is among that minority, reintroducing addax and Arabian oryx, both species of antelopes. The park transferred its addax to Tunisia and Arabian oryx to Oman.

In June, Science magazine reported that, 40 years after a hunter shot the last wild Arabian oryx, about 1,000 of the species now roam the deserts of Saudi Arabia, Israel, United Arab Emirates, Oman, and Jordan.

Johnson, who moved to the desert from Pennsylvania in 2009, is the coordinator for the Association of Zoos and Aquariums’ Jaguar Species Survival Plan. He brought his passion to The Living Desert by initiating a plan for a jaguar exhibit. Visitors have enjoyed seeing Magia since she was introduced to the public in April. Johnson is now looking for a male who is a genetic match to breed jaguars.

“The last jaguar that was seen in California was in 1860 on Mount San Jacinto, so there is a history in the Colorado Desert of jaguars being here,” Johnson says. “This was an exciting chance for us to bring them back and interpret America’s big cat for the Coachella Valley and put it in the context of the habitat where they would actually live.”