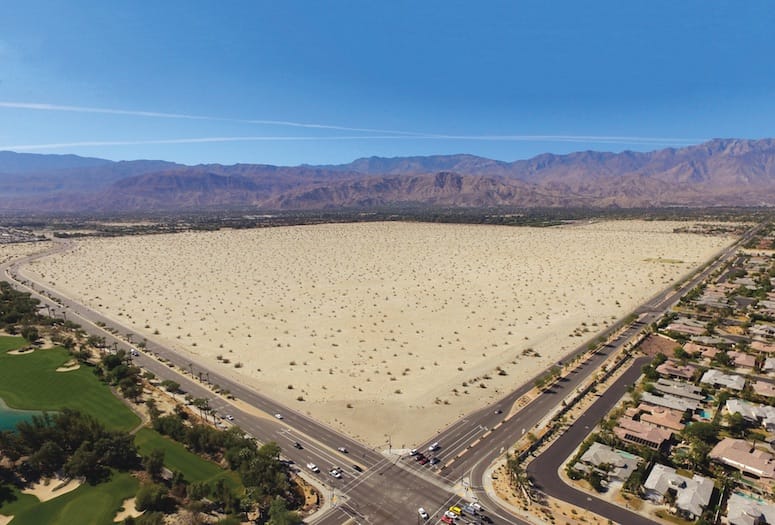 It is a broad swath of land — 618 acres to be exact — and many a passing motorist has likely wondered why it remains undeveloped. It is prime territory, after all. Known as Section 31, the bountiful, pristine acreage starts at the northeast corner of Bob Hope and Frank Sinatra drives, then stretches uninterrupted for a mile north to Gerald Ford Drive and east to Monterey Avenue.

Golf courses border it on three sides — among them a nine-hole short course at Sunnylands, the former Annenberg estate, to the west. Therein lies the beginning of an explanation as to why Section 31 has remained untouched all these years — although that is all about to change. Walter Annenberg acquired the land in the 1960s to create a buffer of privacy while he and wife Leonore played host to many visiting dignitaries and celebrities at Sunnylands.

The Annenbergs maintained ownership of Section 31 for approximately a decade. They sold it in 1977, albeit with covenant restrictions in place as to its usage. Considered a prime location for residential and resort development, the property has long stirred interest among developers and builders.

However, a succession of business dealings in the 2000s coupled with a sinking economy caused proceedings to stall. Finally, in March 2018, a group of investors led by a Canadian private equity firm consolidated all the divided interests and purchased the entire 618 acres. The Section 31 ownership group — EC Rancho Mirage Holdings Limited Partnership — has since partnered with DMB Development, a real estate development firm based in Scottsdale, Arizona, as the property’s master developer. The new owners are confident that DMB, which specializes in master-planned communities, can bring their vision for Section 31 to life. 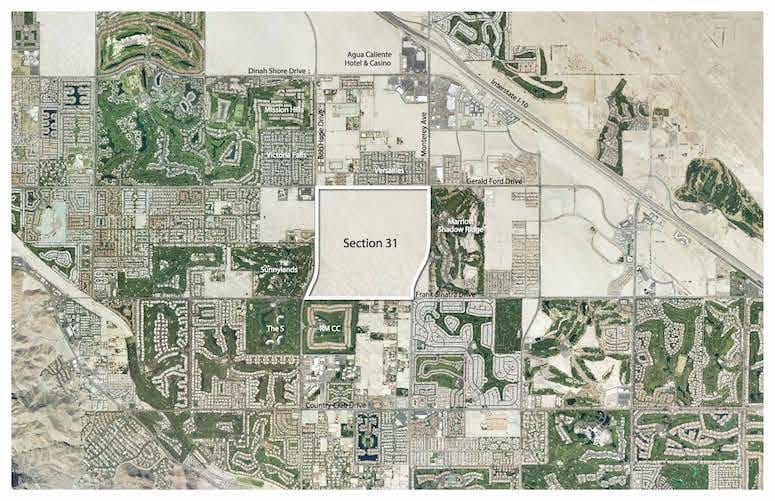 “ It is being billed as a next-generation community with aspirations to be the crown jewel of Rancho Mirage. And if current plans are any indication, it  will succeed.”

It’s being billed as a next-generation community with aspirations to be the crown jewel of Rancho Mirage. And if current plans are any indication, it will succeed. The sweeping vision for Section 31 is that of a luxurious and sustainable grand desert oasis with a clear, swimmable water feature at its center. Elegant, desert-themed residential neighborhoods with a variety of housing types are proposed, as well as an iconic retail village center and a pair of high-end resort hotel locations.

Anyone entering the community will be instantly drawn to the vibrant main-street scene. Plans include a range of shopping, dining, entertainment, gallery, and leisure activities for residents, hotel guests, and the public. The lagoon’s inviting 30-plus-acre expanse of turquoise blue water framed by distant vistas of the Santa Rosa Mountains will form the backdrop.

Premier residential neighborhoods will emanate outward from the lagoon on three sides, all interconnected by a series of quiet, intimate streets. There will also be an integral network of walking and biking trails leading to the property’s center. A resident’s beach club will occupy the fourth side of the lagoon, creating the ultimate environment for water-based leisure, health, and wellness activities for residents year-round. A truly unique water amenity with a plethora of recreational opportunities in the desert could extend the tourist season into the warmer months when activity within traditional golf settings tends to decline.

“Section 31 has tremendous potential to become a world-class residential community, resort, and commercial center. We look forward to working with the City staff and the community to achieve a development deserving of one of the most prominent and centrally located parcels in the valley.”

It’s an ambitious plan, but DMB Development is confident they can deliver an interesting and environmentally sustainable water-based attraction that will further enhance Rancho Mirage’s reputation as a premier destination. Typically, a new luxury community of this scale in the Coachella Valley would be anchored by one or more golf courses.

However, the lagoon is projected to utilize less than 25 percent of the water that one carefully managed golf course requires. It will also rely on innovative technology to minimize energy, water, and chemical usage. The entire property — which falls just shy of an exact square mile — will be richly landscaped with natural and climate-sensitive plantings. Building designs will incorporate best practices for enhancing environmental sustainability as well.

“Section 31 has tremendous potential to become a world-class residential community, resort, and commercial center,” says Brent Herrington, president and CEO of DMB Development. “We look forward to working with the City staff and the community to achieve a development deserving of one of the most prominent and centrally located parcels in the valley.” Although the project is strictly in the proposal stage and no City action has been taken, if approved the days for a vast expanse of prime property in Rancho Mirage to remain mysteriously undeveloped may soon be drawing to a close.