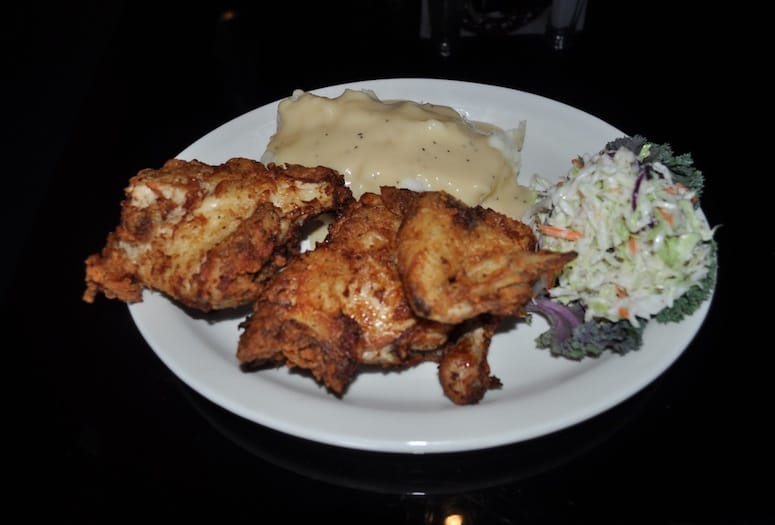 Think of Alaskan cuisine and what probably comes to mind are treasures of the cold northern waters like King Crab, salmon, trout and halibut.

But not fried chicken.

In Anchorage, the Lucky Wishbone opened in 1955, and it’s the place where part-time La Quinta resident Steve Holland has been eating fried chicken since he was a kid, according to Stan Anderson, manager at Rooster’s Fried Chicken & Spirits, located near Walmart in La Quinta.

Holland spent most of his long working life in two business Rs – real estate and restaurants. He was drawn back to the second R when he bought a home in La Quinta a couple of years ago. Using the recipe and cooking methods from The Lucky Wishbone, Holland opened Rooster’s late last year. The interiors at Rooster's includes a small bar and plenty of wide screen TVs throughout.

“Steve noticed that there weren’t any fried chicken places other than Murph’s,” Anderson says. “He thought the valley could use another place.”

Anderson knows the scene pretty well since he was the manager at Casey’s Restaurant for a long time. Over the past eight months, Anderson says, Rooster's has not only picked up a loyal La Quinta following, “but we’re also seeing a lot of new customers this summer,” he adds.

It’s easy to understand why. Rooster’s offers a nice spot to get away for a quiet drink, catch a game on the flat screens, and a menu filled with homey comfort foods.

But it’s the chicken that’s the draw at Rooster’s. The bird parts are buttermilk brined for 24 hours before being dredged in seasoned flour and pan-fried in a tilt skillet. It’s a process that produces moist, juicy meat with a light crust. Whether you prefer white or dark meat, there’s a platter for you ranging from a small plate with a wing and leg all the way up to a five-piece plate with half a perfectly fried chicken.
All the sides are made in-house. Perfectly flaky buttermilk biscuits are made all day. “From scratch,” Anderson says.

The mashed potatoes are smooth and creamy, with small chunks to give it texture.

I am not generally fond of gravy, but the house-made chicken pan gravy at Rooster’s is nearly perfect with pan-scrapings that give it a bit of body and tons of flavor, while still being on the light side. “I’d say that the chicken fried chicken and our burgers are our second most popular items,” Anderson says.

In a valley where people tend to stay close to home, driving from Desert Hot Springs to La Quinta for a chicken dinner is often considered a haul. Jerry and Paulie Geck and their friend Judith Poen made the trip recently. They all agreed it was worth the drive, with plates of nothing but chicken bones on the table. “We’re not planning on making the drive every week,” Jerry says. “But I’m sure we’ll be back at least a couple of times a year.” A full menu at Roster's includes this cobb salad.