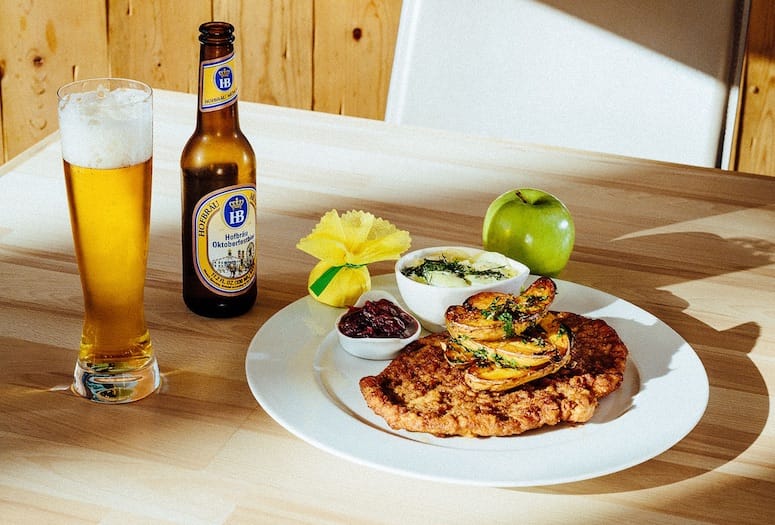 Wiener schnitzel, that traditional Eastern European staple of breaded and pan-fried ultra-thin veal cutlets, might not be as well-known in the Coachella Valley as some of our other famous fare (we’re looking at you, date shake), but fans of the dish know where to find the real-deal version when they’re in the mood for the specialty that goes back hundreds of years.

It was actually the schnitzel-loving locals who prompted Austria-born chef Johannes Bacher to start offering the dish at his eponymous Palm Springs restaurant. “When I opened in 1999, I did mixed cuisine and started out with things like steaks and lobster. I never wanted to do any Austrian dishes in the desert,” he says. “I figured it was hot and people wouldn’t want it.” A few years in, a customer asked if he knew how to make schnitzel. Of course he did. “I had been making it since I was 7 years old, when I started cooking with my mother.” He happily whipped it up for the guest. When more requests came in, he began offering it as a special … “and suddenly this thing exploded.” Johannes now sells more than 500 a week in peak season.

Bacher can’t point to one trick that makes his schnitzel a signature dish but rather a series of steps that all need to fall in line to pull off the perfect plate. First, he tenderizes the veal down to an eighth of an inch, then seasons it with salt and pepper, dips it in flour and egg wash, and coats it with the restaurant’s proprietary bread-crumb mixture — a combination of panko and pretzels (the latter originate from German soft pretzels he dries out for a few days before grinding to fine crumbs). After that, he dips the cutlets in the deep fryer for one minute before pan-sautéeing them in bubbling butter.

Likewise, Michael Kothe, owner of Palm Desert’s Schnitzelhaus, says that schnitzel can be temperamental, and one wrong move can be disastrous. “The secret is to keep the meat soft and tender and juicy while still getting the outside golden brown,” he explains. “It’s very thin, so just one minute too long in the pan can dry it out.”

After operating restaurants in his native Germany for more than 20 years, Kothe and his wife moved to the Coachella Valley in 2015, opening Schnitzelhaus to introduce authentic South German and Bavarian fare, a micro cuisine they couldn’t find in the desert. As is tradition in Germany, Kothe’s schnitzel is made with pork (though they’ll substitute chicken or veal), and while the traditional offering comes with a simple side of lemon and fries, the “Hunter” variation, made with a creamy mushroom-bacon sauce, is the restaurant’s most popular. Kothe also incorporates Bavarian accompaniments based on his grandmother’s recipes including egg-noodle Spätzle and Bratkartoffeln, pan-fried German potatoes laced with onions and bacon. 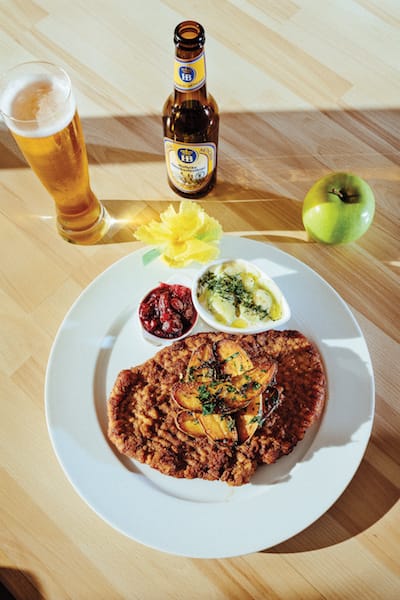 Sides play a serious supporting role at Johannes, too, where Bacher has replaced the traditional mixed greens salad often served alongside the dish in Austria with cucumbers in a dill and sour cream dressing. “It’s my interpretation of a salad my mother used to serve, so it’s a childhood memory,” he says. There’s also roasted fingerling potatoes (“Americans don’t like boiled potatoes, and I think roasted taste better”) along with a housemade cranberry jelly to cut through the fat of the dish with a bit of acidity.

Since making that first plate at his restaurant by request, Bacher’s schnitzel offerings have ballooned to include a full menu of variations. One comes with a green Madagascan peppercorn sauce, another gets a layer of lemon-caper-parsley-butter sauce, and the pizza-inspired “Mama’s” style is topped with tomato, cheese, and arugula. Not that Bacher ever imagined he’d be creating avant-garde wiener schnitzel. “I was almost upset when people would ask, ‘Can you  put some sauce on it?’ ” he says. “I fought it for a long time, but here I am. I’ve done a cordon bleu version … even fish schnitzel. Sometimes we get really crazy.”

“The secret is to keep the meat soft  and tender and juicy while still  getting the outside golden brown.  It’s very thin, so just one minute too long in the pan can dry it out.” Michael Kothe, owner, Schnitzelhaus

RANCHO MIRAGE
Si Bon
This Belgian bistro tops its veal schnitzel with capers, lemon, and anchovies, a popular variation in some parts of Europe.