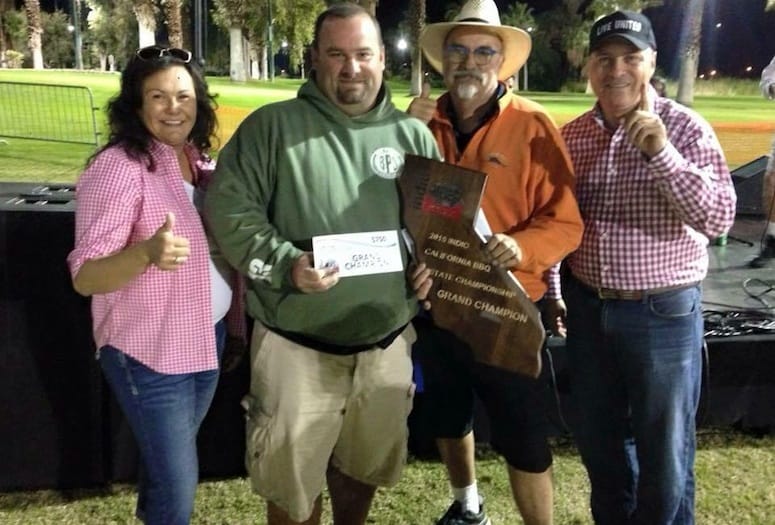 No sitting on the sidelines this time.

Thom Emery sat out last year’s inaugural Indio California State BBQ Championship and Festival because he was prevented from entering as the event organizer.

He’ll be cooking for the second annual Nov. 12 at The Lights at Indio Golf Course. The competition is part of a slew of events under the Coachella Valley Beer Week moniker, which runs Nov. 11-20.

Emery, an Indio resident, has long been feeding his passion for cooking barbecue. Although his “team” can be found cooking around town and appears regularly as a vendor at Stagecoach, Emery notes, “I cook around town but I actually cook more for charities. At Thanksgiving, I’ll cook about 25 turkeys and hand them out at Miles Avenue Park. It’s fun to feed people and cook for people who really can’t afford to have you cater. It’s more gratifying.”

An active member of the California Barbeque Association, Emery, while managing his demolition business with his son, has been organizing barbecue events and contests for almost 12 years. Emery has seen a dramatic growth of barbecue competitions. “When I started there were about three contests in the state,” Emery says. “Now there are four barbecue events just here in the Coachella Valley.”

Last year over 6,000 guests tasted some of the most succulent and delectable barbecue choices with purchased plates from participating contestants. Craft beer selections will also be available for purchase in the Coachella Valley Beer tent. The barbecue competition showcases state and national contenders in a battle of Pro BBQ Pitmasters and is a sanctioned event certified by the Kansas City Barbeque Society.

Contestants will vie for a prize purse and the title of Grand Champion in several grilling categories including chicken, pork ribs, pork shoulder, and beef brisket. There is also a “locals championship” amateur class round for participants who are not pro barbecue pitmasters but are boss backyard grillers.

Emery will put his talents to the test by using a “hot and fast cooking” method which cooks at a high speed over 300 degrees. “It might sound crazy but we don’t use a typical ‘low and slow’ technique,” he says. “We used to stay up all night and it would take 14 hours. Now, I’m cooking and it takes about 5 hours…and it’s working! The only problem is that if you make a mistake, there is no fixing it. But if you hit it right…it’s great!