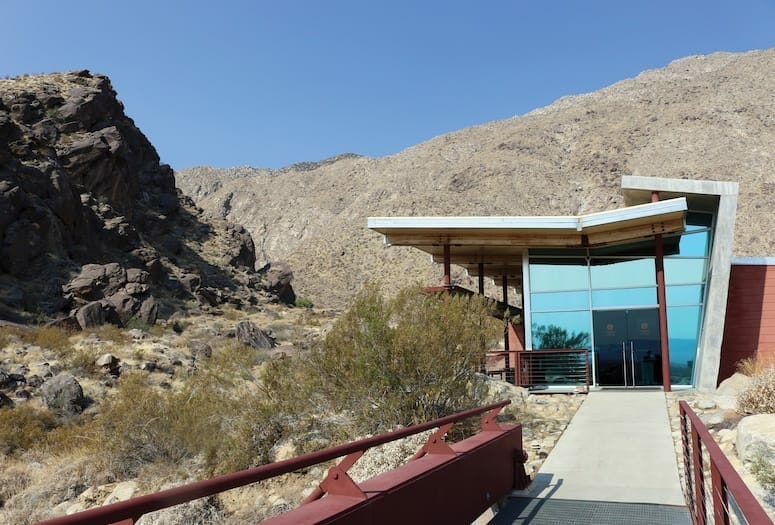 The Tahquitz Canyon Visitor Center presents a fascinating contrast to the spectacuar beauty of the canyon.
PHOTOGRAPH BY KATE ANDERSON

Coachella Valley native Lance O’Donnell always intended to leave his professional imprint on his rugged home turf. For the past 25 years, his name has been synonymous with keeping the Palm Springs modern movement fresh and relevant. His award-winning work advances modernism through new technology, sustainable design, and pure passion that he brings to architecture across the desert—and it all started with a commission from the Agua Caliente Band of Cahuilla Indians.

The duality of the story behind the Tahquitz Canyon Visitor Center is not lost on O’Donnell. His first project as an architect also coincided with the first time in more than 30 years that the public would be invited back into Tahquitz Canyon. Even in its drafting stages, the structure represented the ribbon-cutting of two journeys: one personal, one communal.

Ancestors of the Agua Caliente people thrived in Tahquitz Canyon, hunting, gathering, and utilizing the water. Their village sites date back thousands of years. The dramatic sight and sounds of Tahquitz Falls splashing down a granite rock face into a deep pool has long called nature lovers to follow the canyon’s 1.8-mile loop trail. But in 1969, the Agua Caliente closed access points to the canyon in the wake of great damage, disrespect, and trespassing. Visitors were no longer welcome. 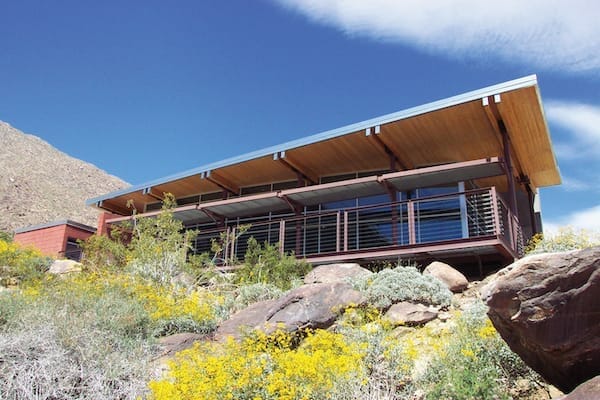 “From an environmental point of view, it is a building that works very sympathetically with the rhythms of the canyon.”

Around this time, O’Donnell was growing up in Indio and Palm Desert; he left to study at Cal Poly San Luis Obispo and then UCLA, completing his master’s degree in 1993. Many grads would have opted to stay in L.A., secure work with a prestigious firm, and practice with a safety net for a few years. Instead, O’Donnell opened an office in downtown Palm Springs. He returned to his roots, eager to break into the business.

Soon after, his partner, Ana Escalante, left the firm to start a family, leaving O’Donnell to take the helm. The young architect had accepted some residential remodels, but the stream of work only trickled in. During one of the slow days at his desk, he picked up The Desert Sun, where a front-page story about the Tribe’s decision to revive the canyon caught his eye. Modern bravado took hold. 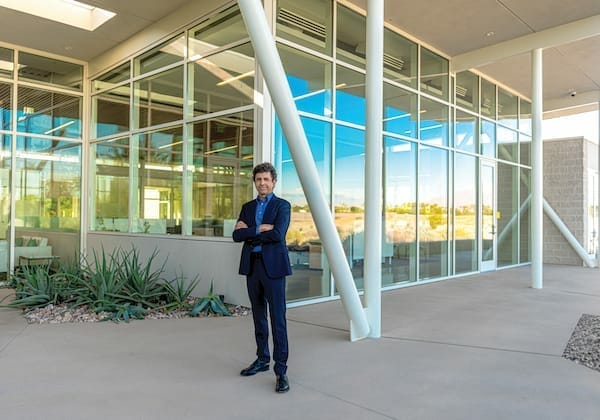 PHOTOGRAPH BY NEIL HUSVAR
Lance O’Donnell in front of his Sunnylands Administration Campus in Rancho Mirage.

“I sent a letter to Tribal Chairman Richard Milanovich and said, ‘You don’t know me, but I’m a local architect, born and raised here. I hear the Tribe is cleaning up Tahquitz Canyon. I would love to participate in any way I can.’ He passed that letter on to the chief operating officer, Tim Taylor, who called and asked me to meet with him and the development group,” O’Donnell recalls. “And then, we were off and running.”

From a practical standpoint, the building required easy access. Navigating the site around ancestral artifacts was also crucial. “There was no road, no parking, no utilities. There was nothing,” he notes. “Not even a dedicated site where the building needed to be.” He proposed placing the visitor center toward the front of the land to prevent undue interference. It would sit just on the other side of a small arroyo. He could lever an observation deck over it, and the bridge installed to reach the center would stir a sense of anticipation for what the future would hold. They built a road from a large flood-control basin up to a staging area, then approached the excavation from one side only, leaving much of the adjacent surroundings pristine.

O’Donnell’s first major architectural undertaking proved to be an initiation of massive proportions, with several engineering puzzles and ancient footprints to follow. “Every day I was waking up to a new challenge,” he says. “But that’s what made it so invigorating. I had this blank slate and had never put a commercial building together. My partner was with her baby, and we didn’t have employees yet. I was the only one in the office.” Yet the Tribe looked with confidence to O’Donnell’s expertise.

So, he made the ascent up a steep learning curve, partnering with the Tribe, the Tribal Council, and the Tribal Planning Commission. If there were moments O’Donnell felt the weight of all those Tahquitz boulders on his shoulders, he didn’t show it. “I was on top of the world,” he says. “I thought, ‘This is the start of my career. And this is what it’s like to be an architect.’” He pressed ahead, determined to deliver a structure that would sit lightly on the land, serving as a functional complement to the canyon and an open door to its exploration. 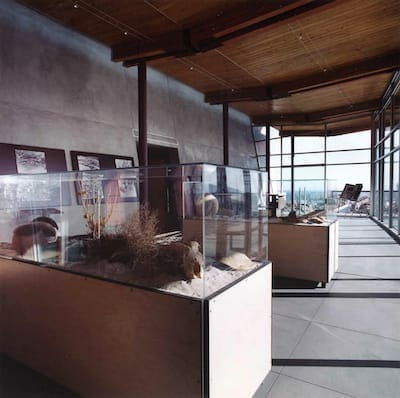 Paving the way for a rebirth of cool midcentury design, O’Donnell selected a palette of “timeless modern materials” that also withstand wildfires. Concrete block, glass, and steel harmonize in his design, which features a southern exposure for year-round comfort.

“I knew that in the winter, the sun would come deep into the space and naturally warm the floor. In summer, the big overhang would shade the glass and keep the heat out,” he says. “From an environmental point of view, it is a building that works very sympathetically with the rhythms of the canyon. It has a strong eye toward durability and works with the natural forces, from energy and water conservation to staff working with daylight and a view.” In many ways, the visitor center was ahead of its time. 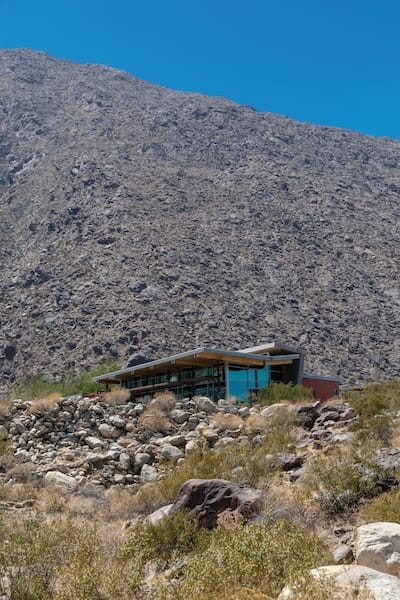 PHOTOGRAPH BY MARK DAVIDSON
The building’s southern exposure provides sunlight and warmth during the winter, while the overhang allows for shade in the summer.

The 2,500-square-foot building fulfills every purpose it needs to without overstepping its physical boundaries or overshadowing the majestic crags that loom behind. Ranger-led interpretive hikes set out from the back door. The interior houses educational and cultural exhibits, Native artifacts, and a theater room that screens “The Legend of Tahquitz Canyon” video.

The winter after completion, heavy rains renewed the brittlebush and creosote around the center, exactly as O’Donnell had envisioned. “I wanted the flora and fauna to come back to life, as if the building had just sprung from nature,” he says.

As a modern sculpture, it presents a fascinating contrast to the spectacular beauty of the canyon. Both are now intertwined in a parallel narrative. The access point to this sacred Tribal land allows the Agua Caliente to tell their story while inviting visitors to experience their culture and history.

Tahquitz Canyon, along with the Indian Canyons, is listed on the National Register of Historic Places. Each year, about 100,000 people cross the threshold, transitioning through the Tahquitz Canyon Visitor Center onto the boulder-strewn trail, which climbs 350 feet in elevation past Indigenous art and ancient irrigation systems, rewarding hikers with a seasonal 60-foot waterfall. Proceeds generated from admission fees assist the Agua Caliente in maintaining the trails and preserving the canyon.

O’Donnell has since completed the conversion of Albert Frey’s Tramway Gas Station into the Palm Springs Visitors Center, designed the 50,000-square-foot Administration and Operations Campus at Sunnylands Center & Gardens, and realized many forward-thinking residential projects.

Yet the career-long instructor can still be seen from time to time touring his architecture students through the Tahquitz Canyon Visitor Center and says he looks forward to the structure’s 25th anniversary, when it becomes eligible for submission to the Concrete Masonry Design Awards.

Reflecting upon his first major commission, he wouldn’t change a thing. “This building still feels fresh and new to me,” he says. The center has become an icon and gateway for Native American cultural heritage tourism in Palm Springs. 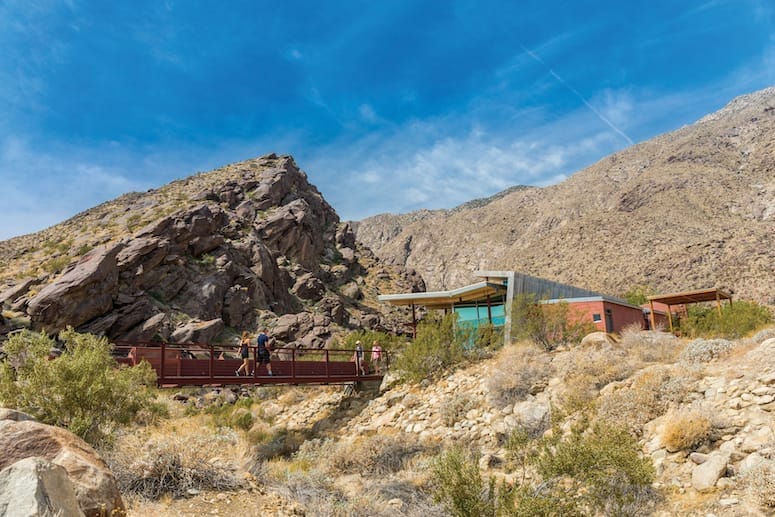