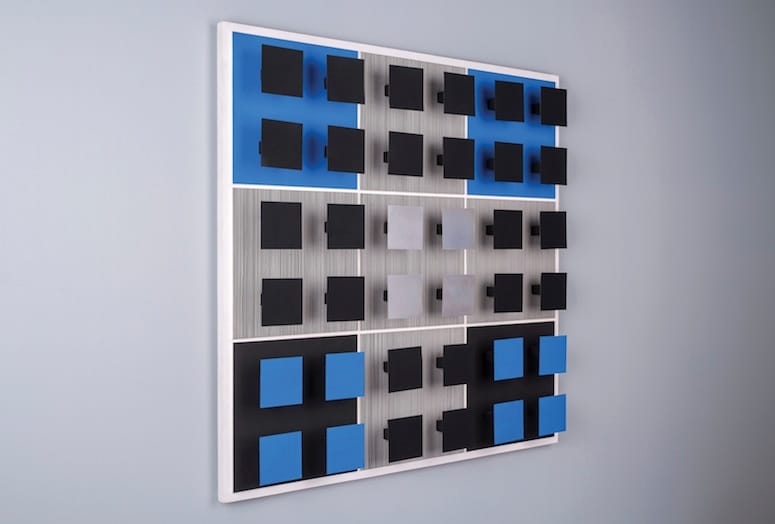 This time the desert has three exhibitions and its own “opening” weekend, Nov. 11–12, with a variety of lectures, tours, and receptions.

While local institutions missed an opportunity to canonize the art of Armando Lerma and Carlos Ramirez — whose collaboration as the Date Farmers and respective solo work comments on the life of Coachella’s Mexican immigrant farmworker community — Palm Springs Art Museum, the museum’s Architecture and Design Center, and Sunnylands Center & Gardens shine in the constellation of exhibitions stretching from San Diego to Santa Barbara.

The musem’s show, Kinesthesia: Latin American Kinetic Art, 1954–1969 (through Jan. 15, 2018), offers a dizzying, comprehensive selection of works by South American artists largely unknown in the United States whose art contains elements that either move or give the illusion of moving or vibrating. They were part of an experimental movement whose nucleus was midcentury Paris, where the revered American sculptor Alexander Calder, most popularly known for his playful mobiles, worked and exhibited. 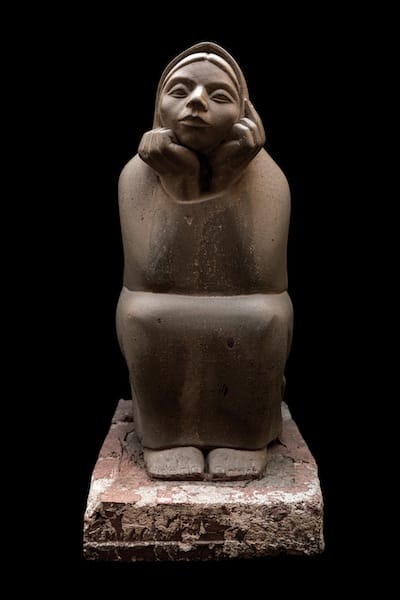 In Kinesthesia, curator Dan Cameron reveals the work of a group of artists from Buenos Aires, Caracas, and Rio de Janeiro who played an important role in the innovations associated with kinetic art. They have rarely received attention equal to their European and North American counterparts. For example, Julio Le Parc, who pushed spatial boundaries by using lights and mirrors, won the pretigious Golden Lion at the 1966 Venice Biennale and inspired a younger generation. He did not receive his first U.S. solo exhibition until last year at Perez Art Museum Miami.

Kinesthesia features more than 50 works by nine artists, including Jesús Rafael Soto, who became one of the movement’s most influential figures for his use of aluminum rods, nylon wire, Plexiglas, acrylic, vinyl, and other unorthodox materials. The exhibition includes his 1969 wood-and-metal wall relief, Cuatro Modulaciones (Four Modulations), which belongs to the museum’s permanent collection, as well as works he created for the groundbreaking 1955 Le Mouvement exhibition at Galerie Denise René in Paris.

“One of the many reasons I was intrigued [by the idea of a kinetic art exhibition] was that much of the architectural and artistic legacy of Palm Springs belongs to the same midcentury period as the works included in this project,” PSAM executive director Elizabeth Armstrong wrote in the foreword of the exhibition catalog. “Another reason was that the light and space movement, which originated in Southern California, shares with kinetic art an interest in the perception of light and color beyond the limits of the object.”

The museum’s Architecture and Design Center asserts a fresh storyline for modernism enthusiasts and an overdue appreciation for the iconic Palm Springs architect Albert Frey. 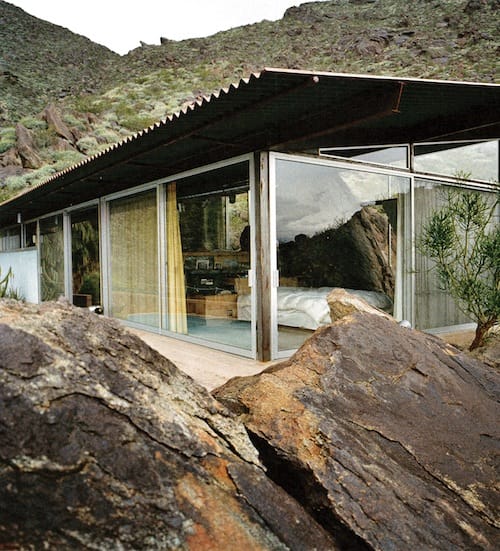 Preparing for Pacific Standard Time, PSAM director of art Daniell Cornell began studying different connections between Southern California and Brazil. “Brazil, like Southern California, is an economy and culture that boomed after World War II,” he says. “There’s a parallel in their development: Both applied World War II technologies to the buildings that supported the urban development and experience.”

Cornell was initially interested in Brasilia, the famous modernist utopia that Oscar Niemeyer helped design 60 years ago, and then encountered the architecture and writings of Lina Bo Bardi, who emigrated from Italy to Brazil in 1946, about two years after publishing a translation of Frey’s 1939 book In Search of a Living Architecture in the Italian magazine Domus. Armstrong, the museum director, knew Zeuler Lima, associate professor in the Sam Fox School of Design & Visual Arts at Washington University in St. Louis, who had recently published the first major U.S. book on Bo Bardi.

“He said there is indeed a connection between Frey and Bo Bardi,” Cornell says, “and I wrote a grant to the Getty to organize a two-day roundtable of historians, curators, and architects to discuss the connections.

“Frey and Bo Bardi were both humanists, interested in architecture that connects people and the way they live and use space,” he continues. “They were also interested in how those ideas translated into public buildings and different landscapes.”

Four houses provide a window into Albert Frey and Lina Bo Bardi: A Search for Living Architecture (through Jan. 7, 2018): the glass houses the architects built for themselves (Frey House II in Palm Springs and Casa de Vidro in São Paulo), and Bo Bardi’s Cirell House and Frey’s Aluminaire House, an experimental aluminum, glass, and steel structure designed in partnership with A. Lawrence Kocher that will be installed later this year across the street from the museum.

The 145 objects in the exhibition — drawings, models, design elements, photography, and documents — shed light on how the architects navigated terrain, climate, and social and aesthetic concerns as well as the relationship between architectural developments in Southern California and São Paulo after World War II.

The desert’s third Pacific Standard Time exhibition, Carved Narrative: Los Hermanos Chávez Morado (through June 3, 2018), unfolds at Sunnylands Center & Gardens, the Rancho Mirage property that contains the estate of publishing mogul and diplomat Walter and Leonore Annenberg. When construction on the A. Quincy Jones–designed residence was completed in 1966, says Anne Rowe, director of collections and exhibitions at Sunnylands, “a vertical fountain element had thus far eluded them.” 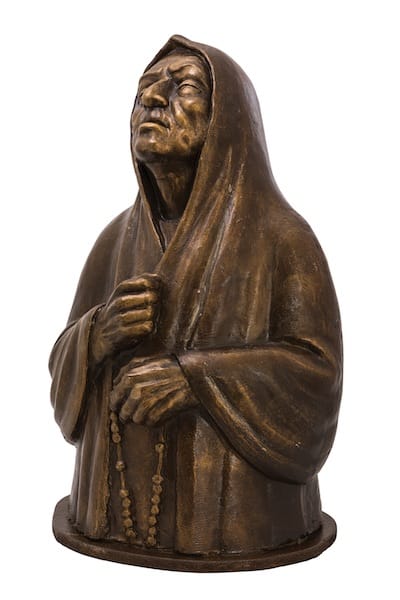 The following year while touring Mexico, the Annenbergs fell for the soaring fountain El Paraguas at the Museo Nacional de Antropologia and commissioned the artists José and Tomás Chávez Morado, to create a half-size version (20 feet tall) for Sunnylands. The fountain’s relief tells the history of Mexico, which the Annenbergs felt was appropriate for their Mayan-themed house with the famous pink pyramidal roof. “The Annenbergs didn’t collect Mexican art per se,” Rowe says. “The grounds are absolutely dotted by objects from their travels. They were both diplomats, and they understood the power of art to communicate a message. They put [the column] right outside their door — an incredible story and message of peace. They were very proud of the column.”

Identifying the artists who created the column proved more complicated than Rowe had expected.

“Because the fountain in Mexico is an architectural feature, it is often attributed to the architect [Pedro Ramirez Vásquez],” Rowe says, noting Mexican people throughout the country regard it like the French revere the Eiffel Tower. “The fountain is famous but the Chávez Morado brothers’ names are not always associated with it. I found their names on the customs forms and a transcript of their sworn statement that they were established, well-known artists and that [the column] was a new work and not an antiquity. Then I went looking for more of their work in Mexico.” 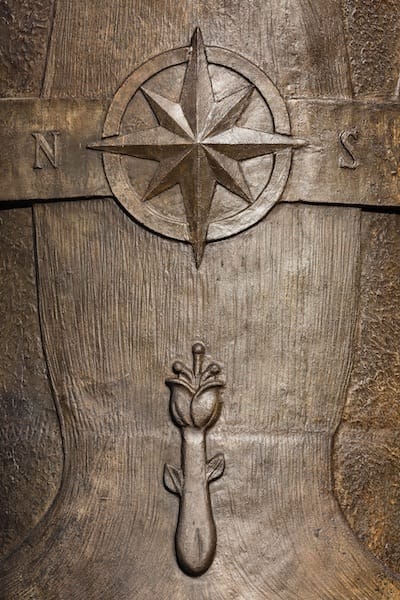 A detail from the column at Sunnylands by the Chávez Morados symbolizes Spanish exploration.

Carved Narrative, which consists of 16 graphically provocative paintings by José and 21 more subdued sculptures by Tomás, marks the first exhibition of the Chávez Morado brothers’ work outside of Mexico and Sunnylands’ first exhibition of art from outside its own collection. It’s also the first time the Annenberg residence, where the column remains a centerpiece, has been included as part of an exhibition.

.José and Tomás were kids in the 1920s and ’30s when the Mexican government sponsored a mural program — notable for its “big three” artists, Diego Rivera, José Clemente Orozco, and David Alfaro Siqueiros — that established the country’s post-revolution aesthetic. José became a leader in the mural movement’s second generation, continuing its narrative- and symbol-infused traditions. He painted three of his best-known murals at Universidad Nacional Autónoma de México (UNAM) in Mexico City.

In both of the brothers’ work, narratives and symbolism prevail, and Rowe consulted with a Mexican scholar to ensure the exhibition materials missed no nuances. In a large 1948 oil painting, Autorretrato con Nana (Self-Portrait with Nanny), José depicts himself as a child during the Mexican Revolution being protected by his nanny in the absence of his mother, who had died when he was younger. Rowe notes that José often inserted pre-Hispanic symbols in his work: “His nanny’s feet reference the Aztec goddess Coatlicue, who is the mother of all gods.”

Narratives course through the paintings, including the 1952 watercolor La Muerte de un Danzante (The Death of a Dancer), which interprets the popular Mexican folk dance Danza del Torito (Dance of the Bull), and the 1942 oil México Negro (Black Mexico), which criticizes religious fanaticism. 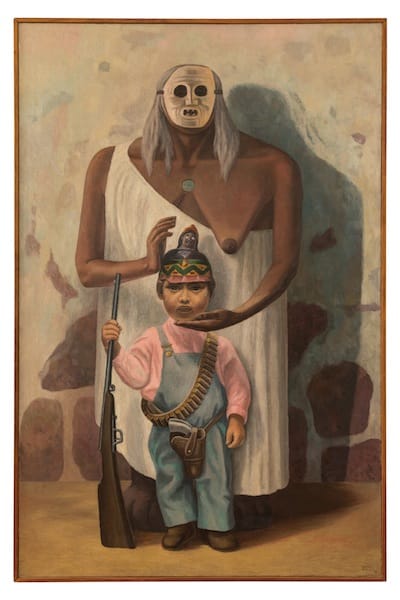 Tomás’ themes were more touching and pure: maternal love and childhood innocence, exemplified in works like the 1959 stone sculpture Imploración (Pleading) — a kneeling mother looking to heaven as her child sleeps in her arms. His work would sometimes bare his teeth. One example is the 1987 bronze Los Jubilados (The Retirees), which depicts an elderly couple begging in the street. Rowe describes it as an “indictment of the Mexican national pension system.”

“We were lucky they both had wonderful careers,” Rowe says. “The missing piece in their legacy was a celebration of their work.” 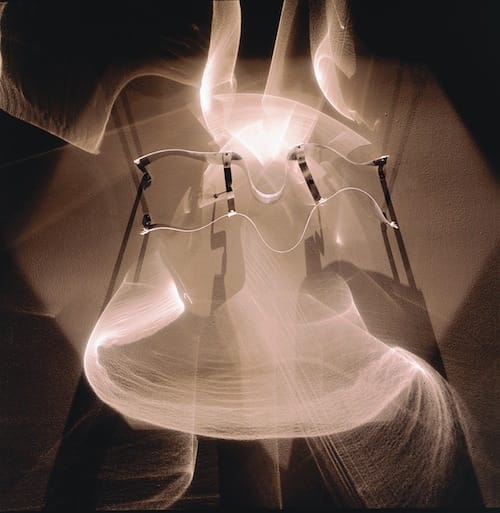