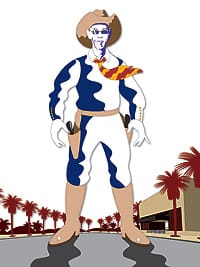 A controversial man in a controversial building: how ironic that developer John Wessman maintains offices in a former bank building bearing a historical designation plaque that makes it hands-off to development.

That paradox reflects the life and times of Wessman, the often-lambasted, longtime local developer of myriad award-winning projects. A montage of messages, rolls of blueprints, and stacks of bound proposals cover his desk. Architectural renderings line the walls. Dressed in his habitual garb — T-shirt, Chinos, and baseball cap — Wessman, 68, peers over the jumble through thick eyeglasses. Tall and rangy, reddish hair receding, his sun-tanned face lined and alert, he exudes an outdoorsy, Clint Eastwood-like style. His staccato speech is edged with excitement, reflecting the energy and motivation of a man 20 years his junior.

Wessman’s success is a textbook story of the American dream. One of six sons of Swedish-born parents, he grew up on a farm in Hemet tending chickens and pigs and helping to harvest walnut and apricot crops.

“At age 14, after working for a Hemet builder and farming, I knew I wanted to be a builder,” he says. “I wanted not to be poor, not to be average. I guess I’m what’s called Type A: play hard and work hard. I don’t feel my age; I still think I can do anything.”

Wessman has just returned from Europe and a rugged month-long bicycle trip through the hills of Tuscany and Piedmont. For leisure travel, he prefers Italy and Spain to Germany, a country he calls “too sanitized and work-oriented.” His outspoken nature often translates to trouble in public hearings and an assumption that he is arrogant.

“My only regret is not finishing college, where you learn how to reason and think and solve problems,” he says. “I’ve had to learn that on my own. But I love to read, and I feel like I’ve already gained three law degrees after surviving so many lawsuits.”

Lawsuits and controversy come with the territory of a prodigious developer of high-profile projects. He began his career in 1964 as an employee of the Coachella Valley construction company headed by Warren Coble and Arthur Press. A year later, he bought out Press; the Coble-Wessman partnership lasted until 1972, when Wessman decided to go it alone.

Standing outside every box, Wessman seems beyond categorizing, both personally and professionally. He is the quintessential Renaissance man: visionary and creative, yet practical and mathematical, energized by the bounty of life and, beneath it all, anxious to leave his mark.

“If as a developer you’re fortunate enough to have time and money, then you can create something you’re proud of. I have tried my best to create buildings with a positive impact, hiring the best architects, designers, and engineers, figuring the economics would take care of itself.”

As owner of downtown’s centerpiece Desert Fashion Plaza, he’s taken flak for leaving it empty since his late 2001 purchase.

“Palm Springs City Council and the media have been raising hell with me to make something happen downtown. But if Desert Fashion Plaza had been remodeled five years ago, it would have been a $10 million knee-jerk reaction, just like when it was originally built — which it never should have been — in fear of lost retail to Ernie Hahn’s new Palm Desert Town Center.”

“They say I’m dragging my feet, trying to manipulate the city.

But we’ve had 25 years of a downward spiral, with a 40 to 45 percent vacancy rate in the mid-1990s. It’s dropped to 5 percent, but the marketplace still is not ready. I could have remodeled Desert Fashion Plaza and made more money, but then it would have been just an average project. All the value is in the land.

“Retail will come when the marketplace is there,” he says. “You can’t force it. Residential must come first. Ten years ago, I said housing and commercial should develop together. Now, that’s how progressive towns like San Diego, Pasadena, and Long Beach are developing: using density to offset higher costs. We are no longer a small, quiet village. By 2009-10, Palm Springs will catch up and once again be a vibrant downtown.

“As the East Valley gets even more congested and paved over, Palm Springs will retain its sleepy, resort nature and enjoy a renaissance. Wealthy people will come back to live, and the Tiffanys and Guccis will follow.

“Already it has the eclectic feeling of a diversified small city, with different architecture styles, distinct neighborhoods, and a new resident clientele. Our growing alternative lifestyle population has been a good force; it’s helped bring back the energy. Palm Springs is one of four major gay areas in the country, and that’s reflected in our politics. Three of our five council members are gay. But we need a balance among the lifestyles. Another positive demographic is that more young people come here. Look at their attraction to the Viceroy hotel. They don’t necessarily seek the generic flavor of La Quinta.

“I think it’s in Palm Springs’ best long-term interest to play up our eclectic nature, like West L.A. and Hollywood. With home prices averaging $1.2 million, even stuffy Santa Barbara approved its first affordable housing project — seeing the wisdom of a balanced, not just exclusive or super-wealthy, population. A community works best when it is inclusive and open.

“Palm Springs has a higher disposable income than the demographic shows. For example, Chico’s store is doubling in size, and only five of 27 new condos at St. Baristo remain unsold. The dynamics of downtown show that the whole is greater than the sum of its parts.

“Palm Springs should grow from its core. Urban density in core areas works better than ‘leapfrogging’ development. This is not a new concept. A group of architects called the Palm Springs Collaborative made the same recommendation in their 1967 report, A Comprehensive Plan for the Development of Palm Springs Central Business District. That prestigious group included Stu Williams, architect of the now-historic building housing my offices. He and Bill Cody, John Porter Clark, Albert Frey, Richard Harrison, Robson Chambers, and Roger Williams — the city’s leading architects — were charged to come up with a master plan for the then-sagging downtown.”

The Collaborative report recommended a perimeter of high accents: hotels, apartments, and quality living facilities outside the downtown “activity core” and a commercial, recreational center with a high-rise on Calle Encilia and Ramon Road. They pegged the ideal ratios to one-third building, one-third parking, and one-third open space, close to the ratios existing today.

“This is exactly what Stu Williams was doing in the 1960s,” Wessman explains. “The Collaborative was pushing urban density and mixed use, and, like today, the dissenters just don’t want change. Stu said he was vilified when people finally accepted it as positive.”

Wessman’s design for a remodeled Desert Fashion Plaza aims to incorporate existing development and create more synergy downtown by adding walkways to connect the Liebling Building on the east side of Palm Canyon Drive with a corridor to the Palm Springs Art Museum and a tree-studded plaza facing the Spa Resort Casino complex on Indian Canyon Drive. Wessman sees it as a vital pedestrian complex, a center of gravity pulling together all the disparate pieces of downtown.

His vision, however, has been thwarted in the past.

He still expresses an ache for the Welwood Murray Library, which in 1990 he had planned to incorporate with his focal Plaza de Las Flores as a bookstore/coffee shop. A citizens’ group demanded it be saved as a library (even though the library board itself deemed the building no longer practical for that use), and it was designated as a historic property.

The Baristo Lofts may suffer the same fate. Wessman has proposed a design that would wrap condominiums around his offices, keeping the original building intact. That’s not sitting well with the city’s Historic Site Preservation Board. And his alternate proposal for a restaurant has not been met with enthusiasm.

“People who are successful are controversial,” Wessman says. “They see opportunities and are willing to take a chance. But they also have to take the flak.”

Wessman has returned to another of his early areas of success: residential building. In the 1970s, he completed many initial phases of Mission Hills in Rancho Mirage. He also built Rio del Sol in Cathedral City, a complex of Spanish-Mediterranean-style homes using the first expandable galvanized steel frames in the Coachella Valley. In recent years, he has partnered with Mario Gonzales, known for neighborhood-style developments. Together, they have built town homes and single-family homes at St. Baristo, Campanile, and Montage at Mission Hills. Bella Clancy, 20 estate villas and five custom estates in Rancho Mirage, is in the finishing stages. Montage at Santa Rosa, a gated 150-home development in Indio, is sold out.

Wessman Development manages about 30 of the nearly 200 desert properties it has built. Wessman once claimed he made more money keeping property than building and selling it.

Of course, he has his personal favorite projects. “Palm Springs’ Mercado Plaza won a Golden Nugget as one of the best community projects of its size in the U.S. and Asia,” he says. “The architecture of the former Chart House restaurant in Rancho Mirage still looks cutting-edge, and so does Plaza de Las Flores, in spite of the library eyesore.”

In addition to raising four children (he has 11 grandchildren), Wessman has acted on his conviction that giving back to one’s community is essential. He has served on Palm Springs’ Planning Commission, the Downtown Partnership for Event Planning, and Riverside County flood control zone commission. He was a director and chairman of the Palm Springs Aerial Tramway, chairman of the Palm Springs Economic Development Corp., and a director of the Palm Springs Chamber of Commerce board. He and Sandy Wessman were honored for their donations of land for a 45-bed facility and support to Shelter From The Storm, a local charity serving victims of domestic violence.

An early proponent with Sonny Bono of the Palm Springs International Film Festival, Wessman helped launch the now-annual event in 1992, serving on its board of directors, and recently served as co-chairman.

A lean physique and endless energy attest to Wessman’s active nature. “The outdoors refreshes you,” he says. “I like to ride my bicycle to work and often hike our wonderful trail system.”

On weekends, he may pilot his private plane to his home in San Carlos, Mexico, or to his Colorado home on the Animus River in Durango. “I like the freedom flying gives me. You can’t be in this business today without access to a private plane,” Wessman says.

“You only come this way once. The worst life I can imagine is one without excitement and challenges.”