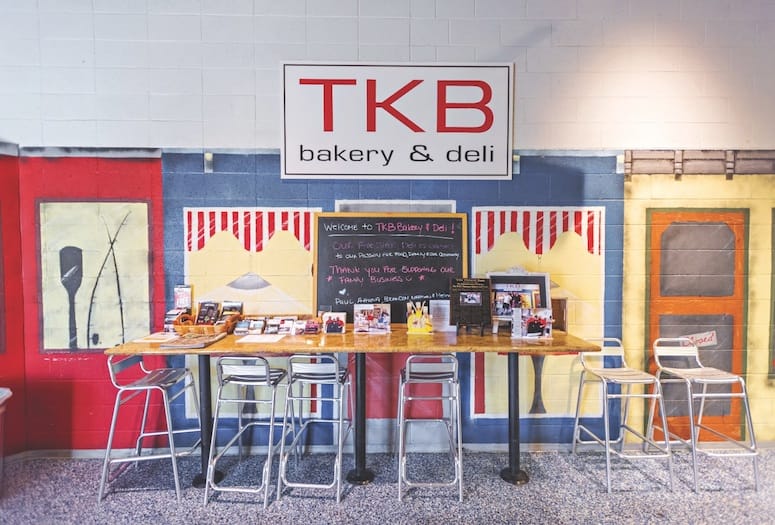 It’s a few hours past the lunchtime rush on a Friday afternoon, but TKB Bakery & Deli, the family-run shop inconspicuously housed in a low-slung industrial park just off Interstate 10 in Indio, is still buzzing with customers. Outside, a group of foreign tourists load a gargantuan order into a van. Inside, the spare, high-ceilinged dining room with cable news playing on a giant screen is dotted with patrons digging into hefty sandwiches. One room over, staffers zip around behind the deli counter creating concoctions like Mexican meatloaf on jalapeño focaccia or lemon-pepper chicken salad on a Parmesan roll.

“What’s up, big dog!” co-owner Brandon Sippel shouts to an incoming customer who’s picking up a takeout bag brimming with boxes. “Howdeeee, y’all! How goes it, baby?” he asks a couple who eat here often. They proudly introduce two friends who’ve never been in before. “Well, bless your heart! Look at that! Are these virgins? Heyoooooo!” The Trump is the deli’s No. 1 sandwich.

Sippel, 34, who runs the business along with his two younger siblings, Melina, 29, and Nathan, 31, makes sure every customer has as good a time as he does.  And that’s part of TKB’s allure. “Our customers get a kick out of my brothers and me,” says Melina. “We make them laugh. We just make them feel at home.”

The fun and camaraderie may be part of what keeps customers coming back for more, but the family credits the food, first and foremost, with their growing success. “We just care so much about the food we’re making,” explains Melina. “The bread is made from scratch and baked daily. They’re all my mom’s recipes. We make her homemade meatloaf, we marinate our own chicken. We make our own chipotle sauce, our pesto.” TKB has garnered rave reviews from customers who have been posting the last few years on the business review site Yelp. Thanks to so many high ratings — at last count there were more than 700 reviews, averaging an enviable five-out-of-five stars — TKB has made Yelp’s “Top 100 Places to Eat in the US” list the last two years, debuting in fourth place in 2015, and landing at No. 5 this year. It shares a listing with casual eateries around the country as well as culinary bucket-list destinations like Napa Valley’s French Laundry and New York’s Gramercy Tavern. According to Brandon, TKB’s walk-in traffic doubled after it made the list the first time and then went up one-third from there this year.

“Our Yelpers are travelers, most of them … going back and forth from L.A. to Arizona, and if you’re traveling on [Interstate 10] and put in ‘sandwich,’ we’re the first thing that comes up,” explains Melina.

Yelp is just a digital extension of the word of mouth that’s been bringing in new customers for the last 15 years. “Feeding the people of the community and having them experience the family circus that is the Sippel family, that word of mouth has spread, and we have never paid a dime for advertising,” says Brandon. “Years ago it was the little mom-and-pop businesses around here that we would feed, then it grew larger and larger and larger.”

It’s much more than the family could have imagined in 1991 when 5-year-old Melina, 7-year-old Nathan, and 10-year-old Brandon started selling cookie dough door to door made by their mother, Athena, who, at the time, worked as a pastry chef at The Vintage Club in Indian Wells. The family’s Rancho Mirage neighbors couldn’t get enough of the sweet stuff, and the family got involved with school fundraisers and started selling to local businesses. Athena rented kitchen space at Mission Hills Country Club, and the kids earned their allowances by cracking eggs and mixing  up the dough. Within a few years, Athena and her husband, Paul, realized they had something special on their hands. “It just took off from there,” recounts Melina. “My mom ended up quitting her job and starting the company.” In 1995, the Sippels secured some industrial kitchen space just north of I-10 at the Golf Center Parkway exit in Indio and began selling the dough to local restaurants and as a retail product to smaller grocers, including Jensen’s in Palm Springs. Retail sales were anemic, so they rejiggered the package size and began selling 10-pound “scoop-and-bake” tubs of dough, along with muffin batter, wholesale to grocery stores that wanted to bake the items in-house and offer them at their bakery counters.

The plan worked. The Sippels landed some larger accounts including Gelson’s stores in Los Angeles and Whole Foods locations throughout Arizona. They’ve expanded their wholesale business and now count many Whole Foods locations in Southern California and AJ’s Fine Foods in Arizona among their clients. Assembling The Trump is a tradition.

When a church that had been renting space next door in the industrial park moved out in 2001, Paul got an idea. “My dad actually took the risk for the deli and said, ‘Let’s make some breads, let’s hire a deli manager, and let’s feed the industrial park,’” says Melina. “They did it out of their love for us, and they wanted us to have something when we got older.” TKB (which stands for “The Kids Business”) was born.

“[P]eople would come in and say, ‘Oh my God, this place is awesome,’ and tell a friend, so it became really popular.”

So popular that TKB opened two locations in La Quinta and another in Palm Desert. Then the recession hit in 2008. “It was like night and day,” recounts Melina. By 2009, the three newer stores were closed, morale was down, and the Sippels had to decide whether to sell the Indio store. Athena and Paul called a family meeting. “At the time, we were not putting a lot of product on the shelf, we were only open four days a week. So we said, ‘Let’s not act like we’re slowly dying, let’s start opening Fridays, let’s start having Barbecue Wednesdays again. Let’s bring the people in and give them what they used to have. We’re not dead.’”

With the family focused on one location together, business bounced back and has been growing ever since  as the siblings settled into their respective roles at the helm. While Yelpers and visitors have been great for business, the support of locals has been even more important. “Indio and Coachella residents have been amazing to us,” Melina acknowledges. “Being at the east end of the valley is kind of better in a way. Residents live here year-round. When you go into Palm Desert, Indian Wells, Palm Springs, they’re leaving more than half the year. So I really have customer loyalty 12 months a year.”

One regular customer who has been especially good to the Sippels is professional boxer Timothy Bradley, who attended Cathedral City High with Brandon. Although he usually sticks with a salad or veggie sandwich when he comes in during training when he’s on a vegan diet, his “cheat day” is another story. “Right after a fight, he’ll go for chicken chipotle or roast beef or he’ll have tri tip on Barbecue Wednesday,” Melina reports. (We can only surmise that Bradley cornered some ’cue after his close, high-profile loss last month to Manny Pacquiao.)

Thanks to Bradley, many members of the boxing and mixed martial arts community have become intensely loyal TKB customers, including UFC bigwig Cub Swanson and well-known boxing trainer Joel Diaz. “My family always supports [Bradley] at every fight,” Melina notes. “We love going to Vegas to see him fight. We went to a few fights in L.A. with the whole crew.”

Like all businesses, growth brings challenge. The Sippels want to minimize the long lines and increase seating capacity. They’re planning a remodel to handle the flow of the average 600 daily customers. Melina says there are also plans to expand vegetarian offerings and to serve beer and wine.

Many of the new ideas they’ve implemented have worked well for the business. TKB launched Saturday hours last year, upped their staff to 18, recently added an “all-stars” menu of formerly off-menu sandwiches they created for regulars, and now give every  customer (not just newbies) a free cookie with their order. “The Coachella Valley has done so much for my family,” says Brandon.  “I would love to meet and feed every single person in this valley and let them all experience my family and our food.”

But not all on the same day.