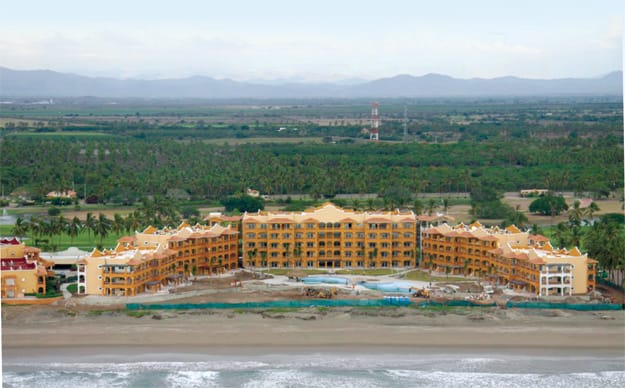 Rita Pacheco often travels between La Quinta and her 5,000-square-foot oceanfront home on the Mexican Riviera in Mazatlan.

“I go every other month and stay for a month. Between my computer and Skype, I can do business from there,” says Pacheco, who manages vacation properties she owns in the desert. She says her five children thought she had flipped out when she announced she was building a home in Mexico. Now they fight to use it. While there, Pacheco plays golf, participates in a book club, and socializes with other residents who are “like family” to her. She’s into the property for about a million dollars, but wouldn’t take less than $2 million (though she has no plans to sell).

Pacheco bought her second home in Estrella Del Mar, a private luxury golf and beach resort built by Palm Springs developer Pat Butler. She had looked at two homes under construction, but then decided to purchase an oceanfront lot and build her dream house.

“I had always wanted a home on the beach,” she says. “I knew there wasn’t any place in California where I would ever be able to own a home like this.”

That’s why more American buyers are going outside the United States for that second or third dream home. Value coupled with a luxury lifestyle in a posh community — whether in Mexico, Italy, the Caribbean, or Central America — is becoming more popular, especially with today’s attractive pricing.

“There is great value proposition out there today when you look at beachfront property in Mexico versus the United States,” notes Butler, president and CEO of Club Acquisition, the developer of Estrella Del Mar. Butler points to construction costs of $350 per square foot for top-quality materials that would run about $1,600 to $2,000 per square foot for oceanfront property in San Diego. A two-bedroom, 1,443-square-foot condo in Phase III of Estrella Del Mar runs $439,000; lots start at $89,900.

Despite the value Mexico offers, Butler confides that sales are off 40 percent from 2007. “Both 2008 and 2009 were real tough,” he notes. Bad news for Butler means good news for buyers. Prices are down about 20 percent since 2007, and about 50 percent of Butler’s buyers pay cash. Developer financing recently became available.

Butler advises people buying in Mexico to check that the developer has title insurance with a solid company such as Stewart, Chicago, or Fidelity. “Talk to residents who have been there for more than two years. They have a realistic view of owning in a foreign country,” he advises.

Good deals also can be found in Costa Rica. Michael Cobb, chairman and CEO of ECI Development, who is building the luxury oceanfront Grand Caribbean resort, sees  continued price flexibility. “Buyers looking for a luxury oceanfront home can find them here with ownership costs at about 20 to 30 percent the cost of a similar property in South Florida,” Cobb says. He advises buyers to look at eight to 10 properties before making any offers and to come in at least 30 percent below the asking price. (Grand Caribbean prices are yet to be determined.)

If owning a home outside the United States seems daunting, you may want to consider luxury fractional ownership. That’s what David Carlson, founder of Fiji Water and managing director of Zinio.com did. Carlson bought a one-twelfth fractional deeded interest in a fully restored and furnished 5,500-square-foot Tuscan villa in the luxury private community of Castello di Caselo. All security, management services, and amenities are handled by the developer, Timbers Resorts, one of the top names in luxury fractional private residence clubs.

“I get to spend four weeks a year there and never have to worry about upkeep or feel guilty that I am paying for something that I am not using enough, as I did with vacation homes I owned in Colorado and Santa Barbara,” Carlson says.

David Burden, founder and CEO of Timbers Resorts, views the current market as a buying opportunity, whether in whole or fractional ownership.

“Go to where you want to be and get the best property and price you can get that suits your needs,” he suggests. “It’s extremely important that you buy from a reputable, solid developer and don’t get sidetracked by what appears to be a great deal.”

Don’t be seduced by price alone. Conduct due diligence, especially when buying internationally. Five years from now, you want to be as pleased with the deal you got as the day you pocketed the keys.