Wexler’s Deli’s Takes Jewish Food Back to its Roots 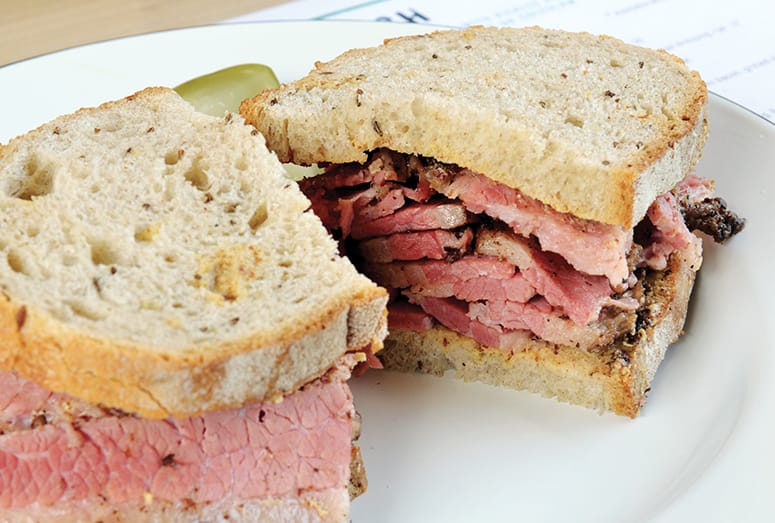 Picture a Jewish deli. Now picture the owners of that deli. Regardless of the images you conjured, two things are fairly certain: It’s not this place, and it’s not these guys.

For Mike Kassar and Micah Wexler — the millennial duo who recently opened the fourth location of their traditional-meets-contemporary Wexler’s Deli within an airy poolside space at the stylish Arrive hotel in Palm Springs — that’s kind of the point.

• VIDEO: Hear from owners Mike Kasser and Micah Wexler during the first days of the restaurant’s opening.

“Our goal is to take Jewish deli food back to its roots, back to where it was 100 years ago,  but bring its culture and the vibe forward,” Kassar says. “Not in a way where we’re trying to be cool, but really trying to be ourselves.” 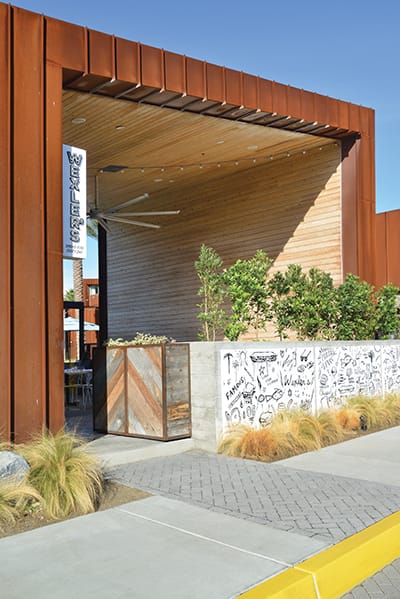 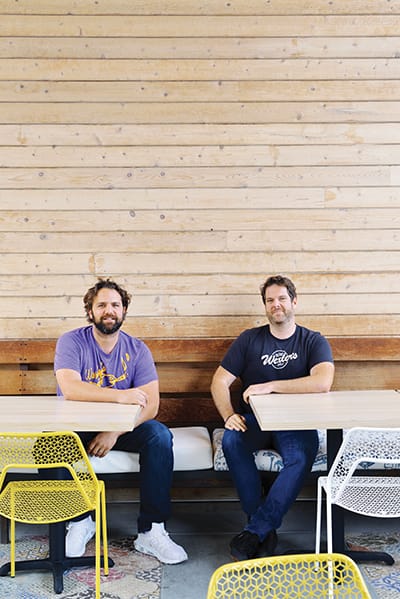 Being themselves and being cool, however, aren’t mutually exclusive. The 36-year-olds, with their beards and dark denim, certainly look the L.A. hipster part. And watching the longtime best friends, who started out as admitted “archrivals” when they met at Cornell’s hotel school, interact only makes them even more affable as they tag-team the telling of their stories, often bursting into booming fits of laughter simultaneously before turning equally earnest when explaining their commitment to their craft.

Chef Wexler and front-of-house-focused Kassar first found success with their Jewish deli concept six years ago. The operators of downtown L.A.’s Grand Central Market — a then rough-around-the-edges food hall that was almost a century old — were looking to revamp the venue and recruit a new crop of culinary talent amid downtown’s massive revitalization.

The two had recently closed their modern Middle Eastern eatery Mezze in Beverly Hills. Though the restaurant had earned plenty of acclaim, a mega-construction project next door had proven too much of a nuisance to overcome. But it was there that the initial iteration of their deli menu was born as a special Sunday-night offering with old-school items like chopped chicken liver, pastrami and pickles, and matzo ball soup. “It became instantly popular, an instant success,” Wexler says. 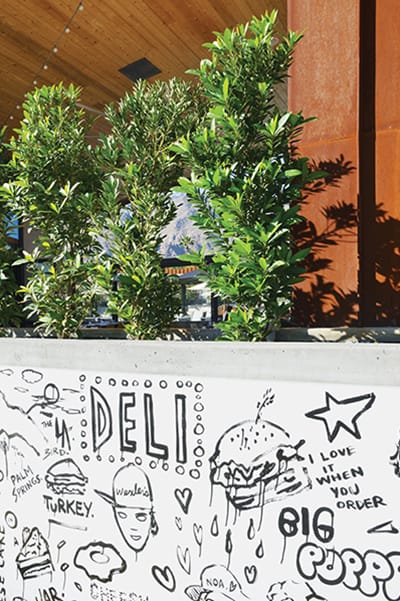 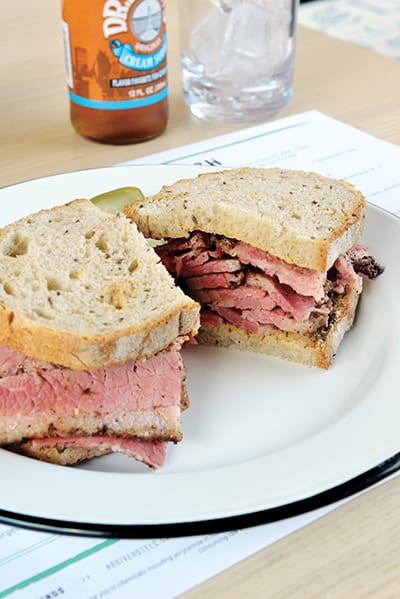 For the Grand Central stall, the guys tossed around several concepts but kept coming back to the deli. Their biggest reservation was Grand Central Market itself. The now-gleaming foodie destination looked anything but at the time with a decade’s worth of dust on the floor, a labyrinth of hard-to-reach ancient kitchen space, and a dash of seediness. But the more they explored the concept, the more they could envision the market’s future, finally signing on to open Wexler’s in 2012.

“We had to take this leap of faith. At a certain point we said, ‘We believe in Grand Central Market … and we think we can be a catalyst to make it happen and push it over the top,’ ” Wexler says.

The most important part of becoming that catalyst was, of course, the carefully crafted food with an emphasis on smoking and curing, processes for which Wexler, a nice Jewish boy from L.A., has always been passionate. (Kassar, a native New Yorker of Lebanese descent, is dubbed “honorary Jew.”)

“I’ve always liked the time that went into those kinds of things and that there was no way to rush it,” Wexler says. “The idea from the get-go with Wexler’s was the same approach as any restaurant: We’ve got to make everything in-house.”

To say Wexler has given every item on the menu an exorbitant amount of thought would be an understatement. He can reel off the history of curing as a method of preservation dating back to pre-refrigeration and talk at length about the trial and error that’s gone into getting the salt ratio just right to highlight the natural flavors of the meat and fish without overpowering them. But in a culinary world full of molecular gastronomy, foraged mushroom foam, and sea urchin ceviche, Wexler struggled a bit at first with the simplicity of his menu.

“We wanted Wexler’s, stylistically, to be very traditional, and that was very limiting until I started to get into the craftsman aspect of it,” he says. “I became driven by it, this idea that my job now is to do the same thing every day and try to make it a little bit better every day. Very much like a Japanese sushi chef. Even after all this time, we’re constantly tinkering with it to get closer and closer to this perfect ideal that’s in my mind.” 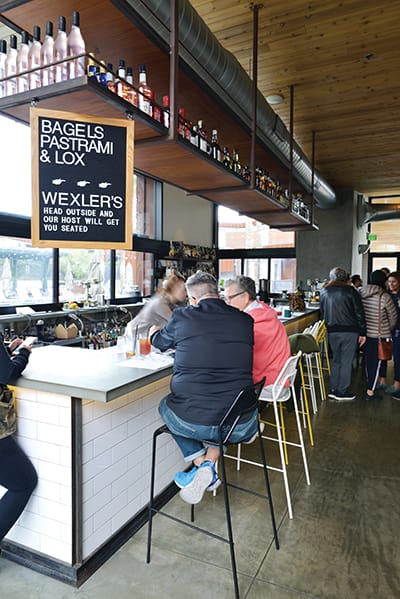 Counter service comes with the cool ambiance of the Arrive hotel.

The restaurant, which also has outposts in Santa Monica and Century City, is probably best known for its beloved pastrami that infiltrates dishes across all corners of the menu. There’s the OG, with layers of meat and mustard piled high on rye (bread that Wexler spent eight months perfecting with an L.A. baker); the Big Poppa breakfast sandwich of scrambled eggs laced with chopped pastrami, and served on a bagel; and the pastrami burger, a special-blend patty topped with massive slices of (yes) pastrami bacon. Then there’s the fish — cured sturgeon and a perfect lox made with naturally farmed salmon from the Faroe Islands north of Scotland along with a double-smoked version meant to mimic pastrami.

A few serendipitous things fell into place to make Palm Springs the deli’s first location outside L.A. Wexler spent a weekend at Arrive last year and was taken with its vibe. Since Arrive Hotels & Restaurants’ chief operating officer Noah Ellis happened to be yet another Cornell rival-turned-friend, he called Ellis to float the idea of a Wexler’s at Arrive. “So many people we interact with are always in Palm Springs, and we kind of feel like our food plays well to all-day dining and a hip, cool, casual hotel,” he says. “We thought it would be a good pairing.” 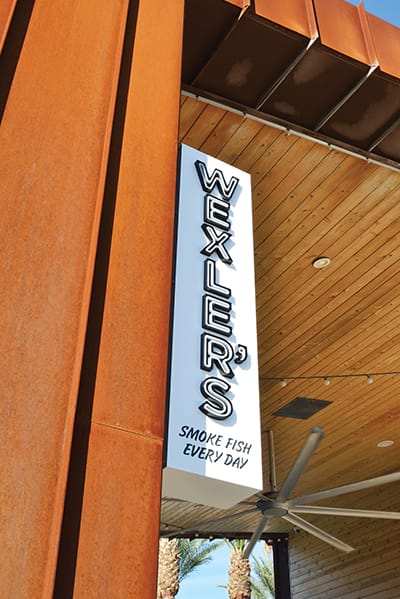 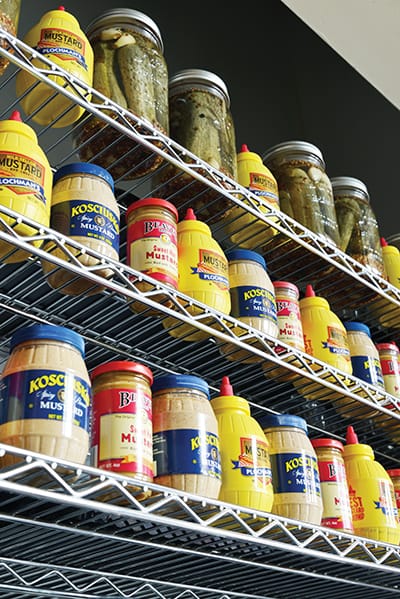 Traditional Jewish deli fare gets a fresh start at Wexler’s.

The result is classic Wexler’s with a few desert-only updates. While they’re sticking with that L.A.-made rye bread, trucking it in a few times a week with the fish they cure and smoke in Santa Monica (pastrami is brined, smoked, and slow-cooked on-site at Arrive), the bagels come from local favorite Townie. There’s also table service, encouraging guests to linger (versus counter service in L.A.), and more of a focus on smoked fish platters with pile-it-on-yourself condiments and old-fashioned potato salad rather than on-the-go, already-dressed bagels. Add a whimsical dessert menu (think frozen chocolate-dipped bananas and a piña colada popsicle) and poolside-inspired cocktails with boozy snowcones and fruit-forward drinks, and the place feels like it belongs in Palm Springs.

To make the space their own, Wexler’s enlisted Greg Siff, the L.A.-based artist who created Wexler’s quirky logo of a fish smoking a cigar (get it?), to paint a poppy black-and-white mural at the entrance illustrating everything from sunglasses to sandwiches to the menu’s Seinfeld-nodding Big Salad.

Kassar and Wexler, who live in L.A. with their families, each now spend several days a month in Palm Springs and are currently working on a dinner menu to roll out in early 2019 that will feature riffs on homecooked Jewish specialties. Kassar says, “We’ll probably have a little bit of fun, but at the end of the day, when people go to a deli, they want deli food.”