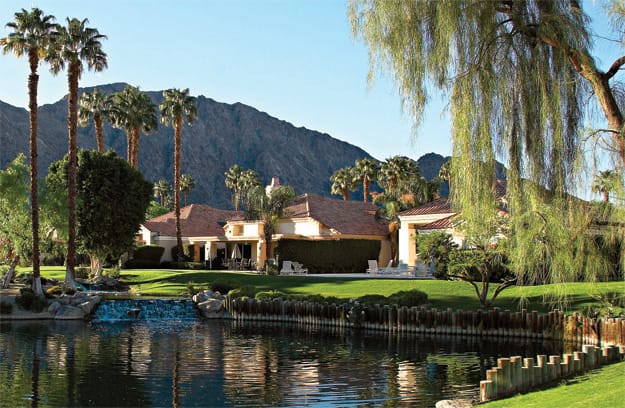 With Palm Springs house prices down 30 to 50 percent across the Coachella Valley, savvy buyers with hard cash and platinum credit have been snapping up prime properties that were likely beyond their price range four years ago. Calgary car dealer Gary Sartorio and his wife, Barbara, for example, scored a great deal at Mirada in Rancho Mirage. The sprawling-view house in 2006 would have sold for well above $3 million. Sartorio bought it furnished for a million less.

“We heard about the buying power here combined with our strong Canadian dollar,” Gary says. “We saw 12 homes in a day and a half and fell in love with this. We didn’t think it was within our budget, but then put the pencil to it and got a great deal.”

Deals span as wide as the stunning views — from moderately priced houses in La Quinta Cove to luxurious Las Palmas estates. And the best values are in short sales, says Harvey Katofsky, president and CEO of HK Lane Real Estate in La Quinta.

Historically, short sales take months to close — a deal-breaker for some buyers. Now, Katofsky says, “Lenders are holding back on foreclosing and doing short sales where they don’t have to own the properties. We are actually dealing with a lender who has a new program for short sales where they are closing them in 60 days. A few banks now have a dedicated employee go to the property once an offer is submitted and verify that it’s an acceptable price. The goal is to get these properties sold and off the market.”

“According to the California Association of Realtors, we are entering the fifth year of this market shift,” says Greg Berkemer, the association’s executive director. “Prices started to drop in the second quarter of 2005. This market fallout was different from any in history. It collapsed from the bottom up when the cheapest homes stopped selling.”

Similarly, fixing the market starts from the bottom. “Eight-five percent of all sales are in the $350,000-and-below range right now,” Katofsky says.

Harry Sterling, an agent with Coldwell Banker in Palm Springs, sees many
Canadian buyers with cash. “They account for about 50 percent of the sales in my office,” he says. “Also over the last few months, investors are coming back into the market, buying second homes.”

El Paseo Bank recently launched a mortgage division. “The mortgage market has returned to the traditional standards of lending from 15 years ago,” says Andy Montgomery, chairman and CEO. Like the “old” days, borrowers must show they can pay back the loan. “To obtain a mortgage today, it takes an excellent FICO score, cash flow or income, and a down payment, depending on the amount of financing needed,” Montgomery explains.

For $250,000, Ron Lindemann of Windermere in Palm Desert finds good value in Palm Springs’ foreclosures. “You can actually get a midcentury modern home that needs work in this price range. They went for twice as much during the peak.”

There are deals also in new construction. A one-bedroom condo at Biltmore Colony in Palm Springs is listed for $167,000. The price was twice that three years ago when the project was first marketed. Head over to Mesquite Country Club and a two-bedroom, furnished unit listed at $199,000 would have fetched more than $300,000 in 2005.

Beverly Bell, a veteran desert broker at HK Lane, has seen it all. “The hardest message to deliver to my sellers who bought from me several years ago is how little equity, if any, they have in their home and what the listing price should be if they need to sell.” Bell recently sold a remodeled three-bedroom house with a pool in south Palm Desert’s desirable Silver Spur Ranch for $360,000. “I know it would have gone for a few hundred thousand more before,” says Bell, who also recently closed “the buy of the century” in south Palm Springs. She sold a bank foreclosure in the Canyon Country Club area. Totally remodeled with $5,000 toilets and a $150,000 kitchen, it sat for several years at $1.65 million. Bell’s client offered $750,000, and the bank accepted.

“There’s great value throughout La Quinta. If you like a particular area, you can now get in at various price points,” Darr says. Take Santa Rosa Cove, an older, gated community of freestanding bungalows and tennis villas adjacent to La Quinta Resort & Club. Prices in 2006 averaged around $650,000. Today, sellers are having trouble selling for $450,000. Hidden Canyon, tucked against the mountains near La Quinta Resort, offers several short sales. When built during the market heyday, these large family homes hit the high $900,000s. Today, you can buy in the low $700,000s.

As we move forward, let’s hope that liar loans and the insanity that contributed to the market plunging is a thing of the past. Meanwhile, grab your cash and good credit rating and take advantage of the values before the market turns again.