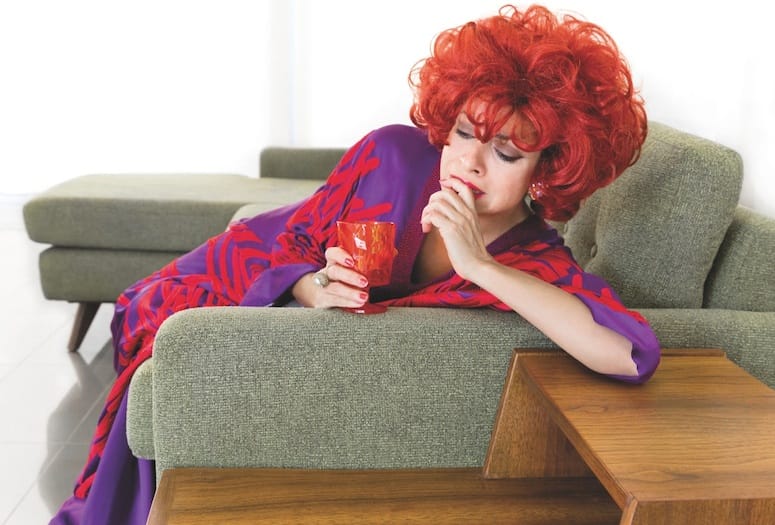 It’s midafternoon on a weekday in the Movie Colony neighborhood of Palm Springs and self-portrait photographer Monica Orozco is lounging around the plush bedroom of a midcentury estate. “I should probably put a bit of lipstick on,” she says, pursing her lips at the vanity mirror. She swivels open a stick of MAC lip color and swipes on the brick red pigment. She scrunches her chestnut curls, sighs, and smiles.

The native Angeleno is in town snapping photos that will debut during her Modernism Week exhibition at Ted Casablanca Gallery, opening Feb.15. Titled Mid-Century Crisis, her showcase will feature a selection of provocative self-portraits inspired by midcentury architecture and Orozco’s own feelings of a looming midlife crisis. She talks to Palm Springs Life about her foray into role-playing and the liberation she feels in front of the lens. Each image is a labor of love, from initial brainstorming sessions (she likes to begin with a vintage reference photo and often works with props) to post-production edits (a painstaking process of color correction and, sometimes, abstract digital manipulation). The final product is an irreverent nod to mod that resembles the biting social satire of photographer Cindy Sherman, though Orozco’s images are uniquely her own.

The room is teeming with equipment: There’s a tripod and beauty lights and cables strung along the floor. An selection of styled wigs crowd the dresser behind her and a rack of retro frocks spill from the corner. While it’s unusual to entertain an onlooker when she’s romping around in character, Orozco isn’t shy. When a wig goes on, Monica becomes deMonica. And deMonica doesn’t give a fuck. 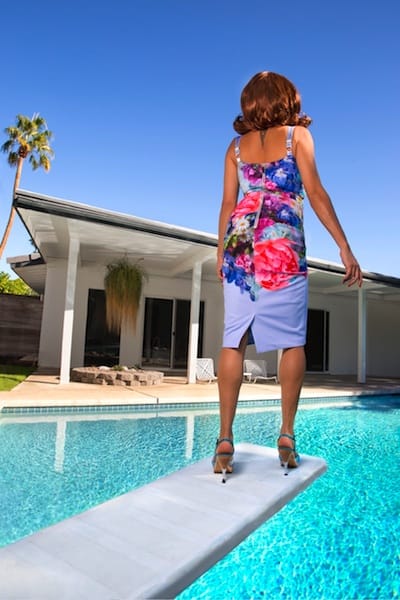 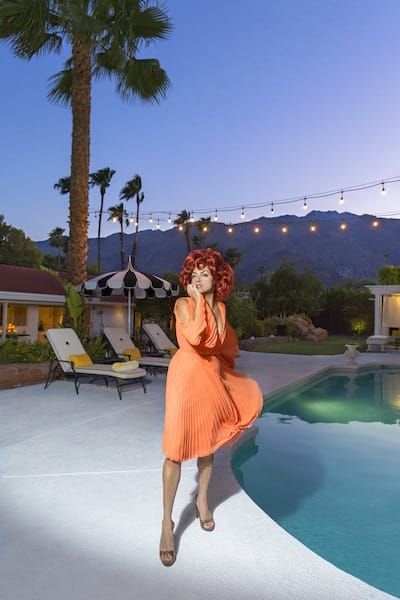 PSL: Let’s talk about the first time you decided to step in front of the camera as the subject of your own shoot. Did you intend to make self-portraits a full-time gig?

MO: The first self-portrait series I did was in the summer of 2009. It’s called It Lasted 16 Outfits and it’s about a guy that I dated for five weeks. It was my first online dating experience. We met; we fell in love. It was this intense five weeks. And then it crashed. I was talking to a girlfriend and I realized, “I think I wore a different outfit each time I saw the guy.” I wanted to take photos of the outfits at the locations we had the dates. We had 16 dates during that five-week run, so I also wanted to shoot within five weeks. It was all the stuff that people do when they date, you know, restaurants, movies, bars, hiking, whatever. One of the locations was the ArcLight, this big movie theater in Hollywood. I asked if I could shoot there and the manager really loved the concept. He was like, “We’ll let you shoot, but you have to show your work here after it’s done.” So that’s kind of how it started. I did it because I thought it was funny, and it was just a way for me to deal with some of the pain. I didn’t realize that people would be so drawn to the concept. But it’s a very universal theme. If you date, and you’re excited, you wear a different outfit.

PSL: I’m guilty. And I’m not sure I would actually want to relive all of the outfits. Was it difficult, at any point, to see the project through? Were you nervous to get so personal?

MO: I didn’t want to show my face. I always had some kind of a prop to hide my face, so there was some mystery to it. Once someone sees eyes, there’s emotion. It’s really all about the outfits. And it taught me that it doesn’t have to be this amazing technical fine art project. It really is just about a story and a concept.

PSL: And now you’re jumping into a different role.

MO: At some point, there’s just not enough things that are going to hide my face. I have a lot of different personalities and characters that came out as I was taking these photos, and that’s interesting for me. Do I want to go dark? Do I want to go quirky? Do I want to go sexy? I can pretend in a photo that I know how to play the piano, which is something I’ve always wanted to do. Or that I’m pregnant. They’re characters that I think are really fun to portray and once it’s in a photo, it’s like, “Yeah, that happened.”

PSL: Is there a theme that weaves together your projects?

MO: Someone once told me, as they looked at a photo, “It seems like she’s gone through so much, but you kind of feel like she’s going to be OK.” That’s the part of the images or the characters that I love, where it’s like, “Yeah, that’s every woman. That’s every person I know. All the women that I’ve met in my life. We all go through so much and, yeah, we’re going to be okay.” It’s freeing. It is a visual diary for me, and people are just coming along for the ride. 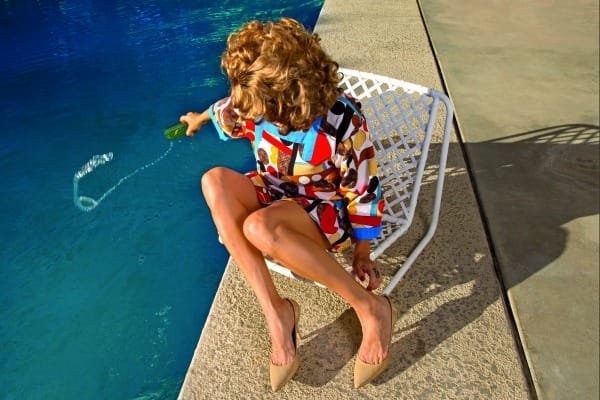 PSL: And do you see a different woman in your images now?

MO: I didn’t realize I was a performer. I am very comfortable when I’m taking images of myself. Recently — I’ve been doing this every year for my birthday — I’ve found that I love taking nude photos of myself. And that’s very liberating because I’m also documenting the changes that are happening. It’s an interesting thing that I didn’t realize I would be into. The body is really fascinating. I highly recommend it.

PSL: What has been the most challenging part of your artistic journey?

MO: For this project in particular, I knew that I wanted to shoot in Palm Springs but I wasn’t sure what the theme was going to be. What I found in shooting is that I was actually able to capture some of the crisis, this neurosis or anxiety of what is going on in the world, what is going on with getting older, dealing with heartbreak, the election results … I feel like there’s something more real about these images. They say something about what people my age are going through.

PSL: What advice would you offer for other artists struggling with their own artistic journey?

MO: Just let the art take over. Let it drive you nuts. Let it guide you. Just do it, because you never know what you’re going to get. Sometimes it takes months, sometimes it takes years. There is no right or wrong.

PSL: Mid-Century Crisis is your second Modernism Week exhibition and your third showcase at Ted Casablanca Gallery. What brings you back for another year?

MO: I love Palm Springs. There’s such great energy here. There’s so much art, and the people at Ted Casablanca Gallery, who represent my work in Palm Springs, have really helped me to connect with the valley art scene. I’m inspired by the architecture, the design, and the lighting. You see the mountains in the background. You decompress. And I always feel like every place I go to in Palm Springs offers a good time. I remember going to the Frank Sinatra house for a pre-Coachella party and feeling like there had been real parties here. There’s this history of good times, and I feel like that’s what Palm Springs is all about.

PSL: So as you approach your own midcentury mark, what’s next for your on-camera alter ego, deMonica?

MO: Each project gears me up for the next, and I feel like all of this is helping me grow as an artist. … The people in Palm Springs are so welcoming. I don’t know if it’s because people are on vacation or they’re all retired, or maybe it’s just the desert. But it’s a very magical place and I could see myself retiring here. I get it.

Visit www.thefineartofdesign.com for more on Fine Art of Design in Palm Desert. 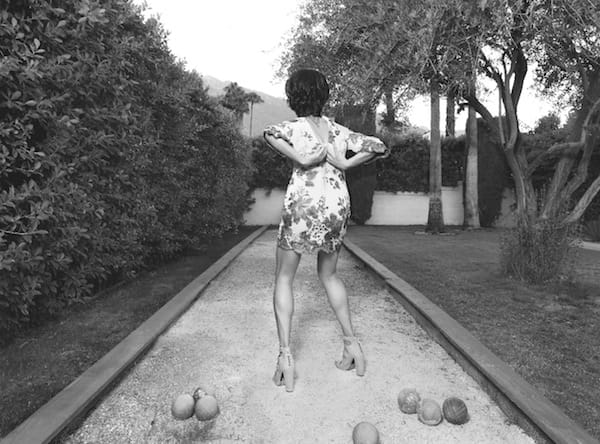 “there is a lot of drama going on in the crisis of these characters. But there’s something kind of ridiculous about them too. I hope the quirkiness  makes someone smile, or at least realize everyone’s
kind of having a shitty time, but it’s all going to be okay.”