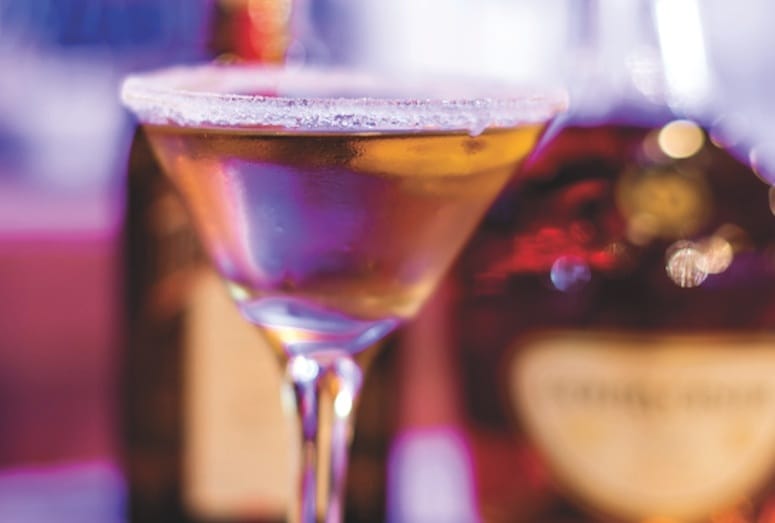 What was old is new again,” explains Mark Myrick, bartender extraordinaire at Melvyn’s, the venerable institution at the Ingleside Inn that has been serving up jazz, drinks, and elegant fare since Melvyn Haber acquired it in 1975. For 29 of those years, Myrick has been mixing libations for its famously thirsty habitués.

“The cocktails that were popular 50 or 60 years ago — the old-fashioned or the sidecar — are being ordered by the young crowd that comes in here.” Young crowd? Hipsters at Melvyn’s? Were they lost, blinded by desert winds billowing their bushy beards and vintage caftans?

Myrick gives a dismissive shake of his head. “During season, it’s standing room only.”

The Pasadena native agrees to mix up a drink he thinks would be perfect for listening to Coltrane and Hartman, or maybe some Ella and Louie. Expectations of a show are quickly dashed. Myrick doesn’t perform. He mixes ’em quick for an eager audience. In a stainless steel shaker filled with ice, he pours in a few fingers of Courvoisier and a shot of Cointreau. He squirts in a splash of the bar’s secret sweet-and-sour mix and gives a wink as he gives the concoction a few efficient shakes. “After 29 years, I don’t need to measure.”

Myrick takes a martini saucer, rims it with granulated sugar, and then pours in the drink to the brim of the glass. He tosses down a Sinatra commemorative napkin that lines up so perfectly Ol’ Blue Eyes gives the patron an encouraging and conspiratorial wink. Myrick sets down the sidecar with a minimalist flourish, sans slosh.

In theory, a sidecar doesn’t seem like it would work, but the mellowness of the cognac, the tart sweet-and- sour, and the hint of orange liqueur combine to produce a delicious sip and a delightful buzz. Is that Art Tatum or McCoy Tyner tickling the ivories, or is it a sidecar–induced musical fantasy?

Down at the end of the bar, a group of octogenarians raise their second round of cocktails in a convivial salute. There is nothing to do but return the gesture. Mark Myrick has bartended at Melvyn's for 29 years..

Fill a cocktail shaker with crushed ice.
Pour in:
3 parts cognac or brandy
(Spanish brandy will produce a sweeter cocktail)
1 part Cointreau
1 part sweet-and-sour mix
(Sweet-and-sour mix can be made at home by dissolving 1 part sugar into 1 part water over  low heat on the the stove. Add 1 part lemon and 1 part lime, then let cool.)
Shake vigorously for 15 seconds and then strain into a martini glass rimmed with sugar.