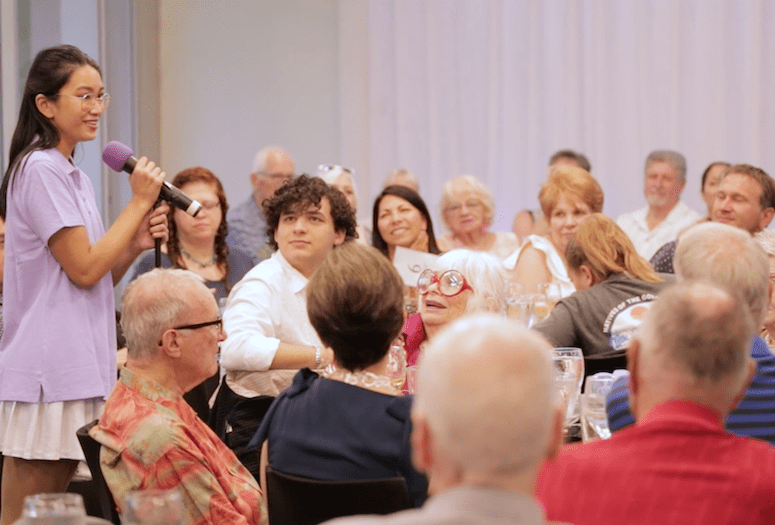 Musical Theater University performer Maglia Sabio sings "We Kiss in the Shadows" from The King and I at Acqua California Bistro on July 11.
PHOTOGRAPHS & VIDEO BY NICHOLAS COX

It takes a very special event to entice folks from the cool of their homes to brave even a short walk in the heat. David Green, producer and creator of Musical Theater University (MTU), has put just the right combination together to make that happen.

It’s a brilliant idea: give the desert the theatrical entertainment it loves, put it in a cool environment, and showcase new talent in the desert. Green had everything except the venue. Enter Jerry Keller, creator of Acqua California Bistro at The River and the wildly popular Lulu California Bistro in Palm Springs who has been a supporter of MTU since Green brought it to the valley.

Keller is no stranger to musical theater. He was the romantic lead in Jerry Herman’s first professional show in 1953. Over the years, he and his wife Barbara (who passed away in April of this year) have been active supporting theater.

“We’d been kicking around ideas with David and this idea fit really well with what he needed, what we needed, and the kids get a chance to perform. It’s a great concept,” Jerry Keller says.

The concept? A Broadway revue where MTU students and alumni sing and dance their way through the night and, with a wink to how many performers earn their living while trying to get their big break, they are also your servers. Do not envision them singing and dancing around the Aqcua California Bistro River Room with plates piled up on their arms. That’s only in the movies.

You only get one take in theater, so rest assured there are experienced servers to make sure service runs smoothly, while allowing the 11-member cast to do what they do best, wow you with musical numbers big and small , the big ones backed by quality orchestral tracks and the softer moments by musical director and local entertainer, Jaci Davis. And while there is some light entertainment before dinner is served, the real magic starts after the plates are whisked away.

Songs from over 10 musicals were performed by the talented cast: Demondra Martin, Ellen McGihon, Angie Rodriquez, Elizabeth Shay, Maglia Sabio, Emily Unnasch, Maverick Carpio, Carlos Garcia, Griffin Giboney, Jordan Lockett and Ian Tang. While all of the performers and numbers were terrific, there were a few standouts. 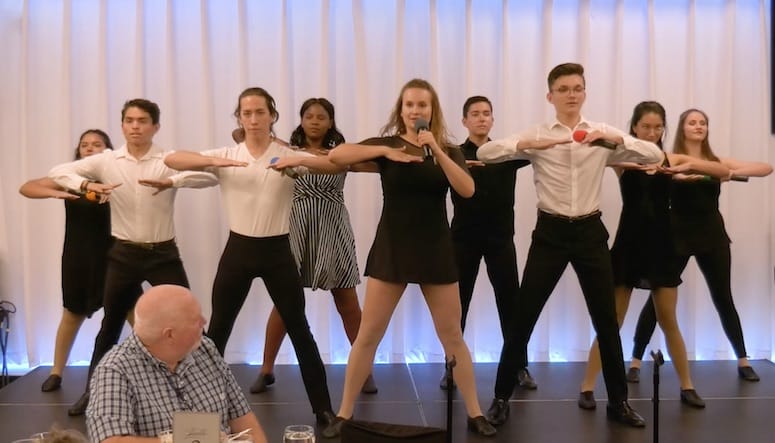 Early on, Sabio and Tang did a great job with “We Kiss in the Shadows” from The King and I with Tang accompanying them on ukulele.

“You Can Always Count on Me” (City of Angels) performed by Shay and “Proud of Your Boy” (Aladdin) performed by Giboney were both as delicious as our meals.

Fifteen-year-old Rodriguez’s vocals on the high-energy “America” from West Side Story, and the accompanying dance number (all choreography splendidly created by Michelle Ditto) amped up the evening, and was the first time the crowd was brought to its feet.

And just when you thought it couldn’t get any better the Chicago medley of “All That Jazz” and “Cellblock Tango” was dominated by McGihon, a young lady with all the chops – voice, dance, acting and sass – leaving us wanting much more.

And more is what Green gave us with special guest artist Davis Gaines, who has played the lead in Phantom of the Opera over 2,000 times, wowing us with songs from Jekyll and Hyde, Don Quixote, and Showboat. Next week’s guest artist, Janine Lovullo, was also in the house and Gaines brought her on stage for an impromptu “Climb Every Mountain” (The Sound of Music) featuring everyone.

And still the night at Acqua California Bistro had one more thrill in store; the finale featured the entire cast doing Les Miserables’ “On My Own” that once again brought the crowd to its feet.

Green says the show is ever evolving and each week the production will be different, so don’t expect the same songs, the same cast or the same guest star. You won’t know what you’re going to see and hear until you get there, but bring extra socks. Yours are going to be knocked clean off.

Cabaret Offerings in the Desert

While many of the theaters and cabaret spots have shuttered during the heat of summer, here are some cool shows where you can get your fix.

When: Thursdays, 5:30-7:30 p.m.
Where: The Copa, Palm Springs
What: Popular entertainers Francesca Amari and Jeff Stewart with Wayne Abravanel on keys and vocals continue to pack the house with their song stylings and goofy repartee. It’s one big party where you are encouraged to sing along and get involved with the fun. Food available off a downsized Tropicale menu.
Cover: none
ModSquadShow.com

When: check website for shows and dates
Where: PS Underground, Palm Springs
What: A multitude of creative. themed dinner shows featuring some of Palm Springs finest entertainers. These shows have been wowing audiences for over six years. You never quite know what to expect.
Cover: ticket prices vary per show.
psunderground.com

Les Michaels’ Broadway Open Mic with Joel Baker and YOU!

When: 2 p.m. Sundays through Sept. 30
Where: Arthur Newman Stage at The Joslyn Center, Palm Desert
What: Various reknowned artists and their musical revues, always a big hit.
Cover: $15
lesmichaels.com