One of the keys to the success of the dinners is a commitment to sourcing local ingredients.
PHOTO COURTESY OF OUTSTANDING IN THE FIELD

By now, any foodie worth his weight in black truffle salt knows all about farm-to-table fare and pop-up dinners. But the idea of combining the two — creating a feast focused on seasonally inspired ingredients sourced from farms where guests would actually dine — was rather novel when artist and chef Jim Denevan first attempted it in 1999.

Denevan, who was working as a chef at Santa Cruz’s Gabriella Cafe when the idea struck, had already held a few “farmer dinners” at the restaurant, where he’d make a meal centered around produce from his brother’s nearby organic farm. “I just loved those dinners,” Denevan recounts. “But at that time, I had it in my mind that I wanted to take the table out to the farm.”

And so he flipped farm-to-table into table-to-farm. With only 25 paid attendees at his first event, Denevan filled seats with friends to inflate the crowd. “I thought it would be powerful to see the tables and chairs with all the food and the people enjoying themselves,” he explains. “I’d put all this energy and time into it, I thought, I’ve got to get a picture.”

It may not have been an immediate sweeping success, but Denevan knew he was onto something. “I definitely had the feeling that food culture was changing. Restaurants were starting to have the names of the farms on the menu,” he says. “People were going to farmers’ markets more. It seemed like this moment was in the works for things to be different and I wanted to be part of that.”

He dubbed the series Outstanding in the Field and took it on the road, connecting with farms and local chefs, first in California and later around the country, to set up his now iconic communal dining table in stunning settings from vineyards to cornfields. Tickets to the long, leisurely meals would be accompanied by local wine or beer, a tour of the venue, and discussions with the growers (or ranchers, or fishermen, or vintners…).

It took plenty of trial and error, an inheritance, crisscrossing the country multiple times in a groovy red-and-white vintage bus, a growing amount of national press coverage, and a final infusion of cash to get Denevan and his team over the hump and into the bona fide success-story territory where they sit today. 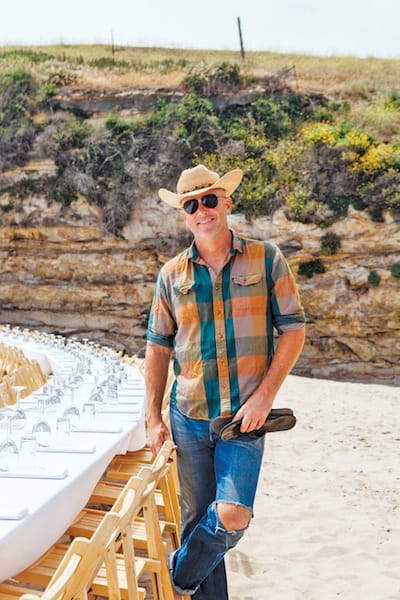 (The cash infusion incidentally came from Range Rover, which offered the artist — whose specialty is etching elaborate geometric designs in the sand — $140,000 to create a sand drawing for a commercial. He took the deal).

Fast-forward to 2017, when OITF will create 90 dinners in 27 states, along with a sprinkling in Canada and one in France. Not only are most of the events, which range in size from 130 to 200 guests and cost around $235 per person, sold out by the time the dinner takes place, but Denevan says more than 75 percent of seats are purchased within the first 20 minutes of the schedule’s March release. 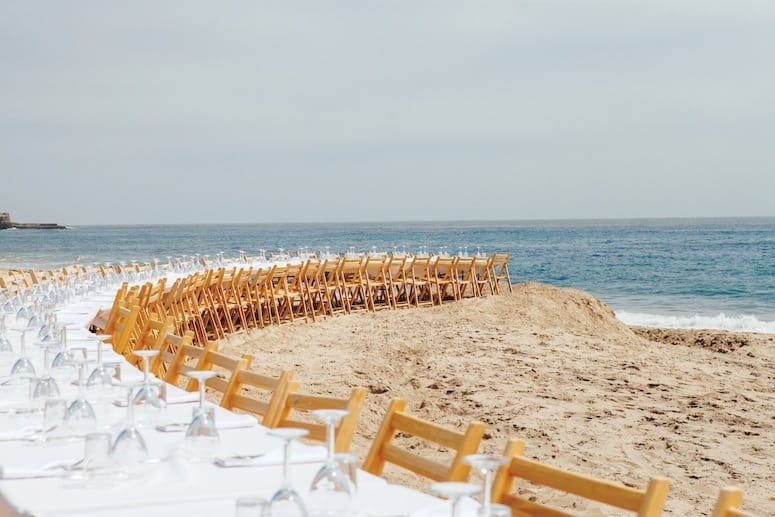 PHOTO COURTESY OF OUTSTANDING IN THE FIELD
Like all Outstanding in the Field venues, this dinner at Secret Sea Cove near Santa Cruz, California, combines elegance, fine dining, and natural beauty.

Since OITF’s mission is to reconnect diners to the land from which their food originates and to honor local farmers and artisans, what’s produced at each property is usually the star of each meal, though a solid supporting cast of ingredients is sourced from other locations nearby, with those farmers often in attendance as well. Family-style meals typically include a handful of passed hors d’oeuvres followed by four seated courses, including a dessert. Guests might indulge in a Portuguese stew of abalone, rockfish, and clams at an abalone farm on a rocky stretch of Central California beach; a mixed grill of sirloin and skirt steaks at a Wyoming cattle ranch; or roasted quail atop just-picked collard greens and turnips at a colorful flower and fruit farm in Georgia. The dinners are indeed dreamy, but for the Outstanding in the Field team as well as the evening’s chef and staffers, pulling the whole thing off on a patch of land that’s often remote, void of cell service, and without water and electricity is equally gratifying and challenging.

“I tell my guys in the kitchen, ‘It’s the most work that you’re ever going to do,’ ” says Brian Redzikowski, head chef of Kettner Exchange, an innovative eatery in San Diego’s hip Little Italy. Despite the intensity, Redzikowski, who already has three OITF dinners under his belt, is tackling another this year, Oct. 22 at Temecula Olive Oil’s 26-acre ranch in Aguanga, about 18 miles east of Temecula. 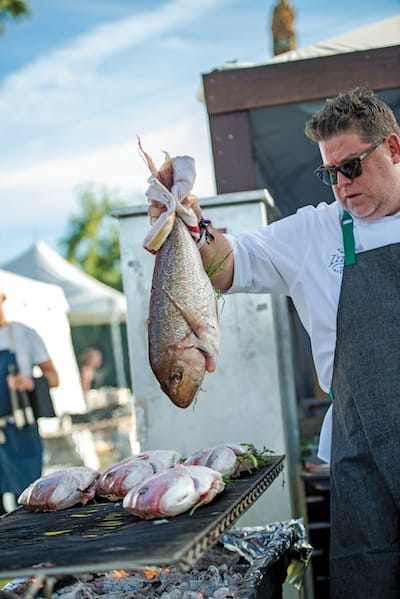 A fish dive-bombs the grill. 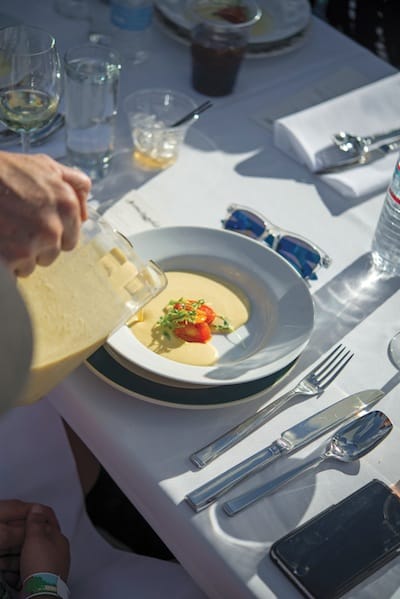 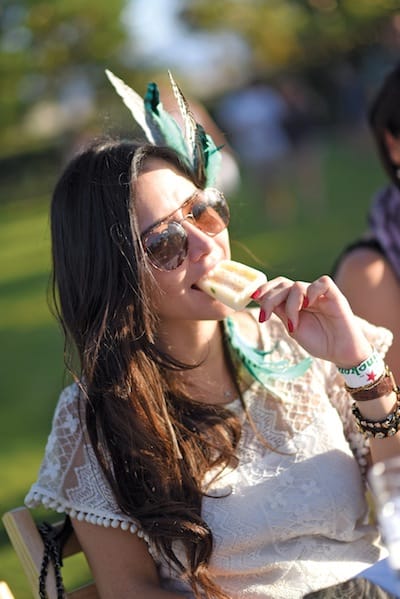 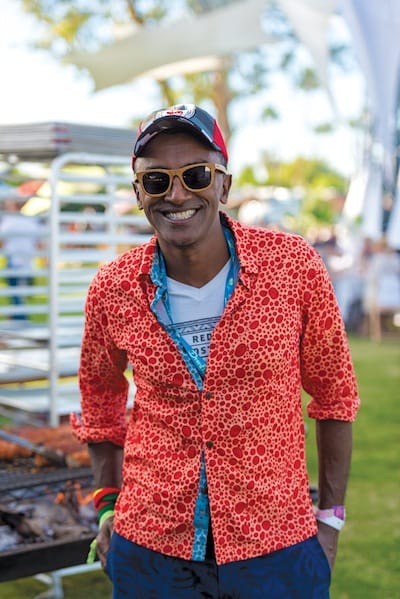 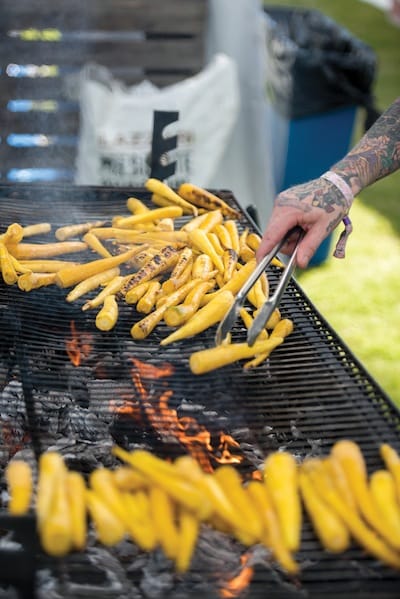 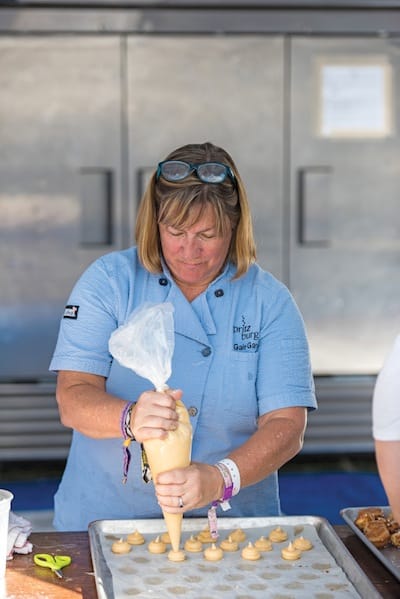 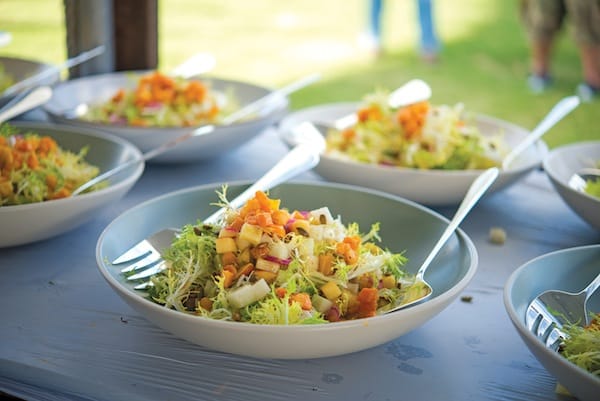 A frisée salad served up for Coachella dining patrons.

After a few preliminary visits to the ranch, Redzikowski and his team start prepping three days prior and don’t stop until the morning of the event. They arrive with a packed U-Haul ready to cook on wood-burning grills and in makeshift in-ground ovens. In addition to using the ranch’s olives, olive oils, and vinegars, the chef incorporates herbs like lavender and lemon balm that grow wild there. “It’s about letting people know where the food comes from,” says Redzikowski, who also sources produce from Temecula’s Crows Pass Farm and fish from Catalina Offshore Products in San Diego. “You’re out there in the elements. It’s unpretentious. It’s how food should be.”

He’s had fun amping up the wow factor, too, fashioning serving dishes out of sticks and wood gathered on the property and making a dessert meant to mirror the terroir, creating “gravel and soil” out of crystallized sesame seeds and cocoa. This year he plans to suspend passed hors d’oeuvres from balloons in an ode to Temecula’s annual hot air balloon festival.

In recent years, OITF has branched out to more unlikely venues, setting up at an elementary school turned urban farm in central Detroit and on a rooftop in Brooklyn.

“The food is great and all, but the feedback is about Outstanding in the Field and the atmosphere more than anything,” he admits. “I don’t know if you can compete.”

Indeed, the well-oiled machine that is OITF’s team of “culinary carnies” arrives ahead of time — in that same vintage bus that’s become a sort-of mascot for the roving series — along with a few trailers of equipment (“We call it ‘dinner in a box,’ ” Denevan jokes) to build what’s essentially a one-night restaurant for 200 people.

“It’s pretty darn challenging to have a restaurant that moves all the time but also has a different chef all the time,” says Denevan. “[We’re] creating a cultural environment from a blank slate and we’re making it interesting and organized for these chefs to want to participate from year to year.”

In recent years, OITF has branched out to more unlikely venues, setting up at an elementary school turned urban farm in Central Detroit and on a rooftop in Brooklyn, for example. And, in a food-culture-meets-pop-culture marriage, dinners took place on the Empire Polo Club grounds every night during both the Coachella and Desert Trip music festivals.
The festival meals veer a bit from the usual protocol, with two shorter seatings per night in a VIP area and a rotating roster of multiple chefs … not to mention a group plan to see world-famous musical acts after the meal. Denevan insists, though, that the dinners are indeed still farm-focused, with produce sourced from County Line Harvest in Coachella and Anza’s Sage Mountain Farm. “There are a lot of people who go every night, which is kind of trippy,” he says.

Coachella aside, it’s now commonplace to see regulars, affectionately dubbed “Fieldheads,” at multiple dinners every year. “I thought people would do it as a bucket-list thing, but people get hooked,” Denevan confides. “One thing I didn’t expect was the number of travelers. At any event now there’s going to be at least 30 percent of the people who are out-of-state. There are people who love to see the country through the dinners.”

Andy Primack, a Claremont resident and executive at a specialty aluminum products company, is one of them. He estimates that he and his wife, Lisa, an avid organic gardener, have been to approximately 60 dinners in “staggeringly beautiful settings” from British Columbia to Vermont to Catalina Island over the last decade. And while the couple are admitted foodies, it’s not just about the fare. “We often pick the dinners at locations we otherwise would not go,” he says, citing Oklahoma City as a recent example. “We saw it and said, ‘Hey let’s go there, that would be kind of interesting,’ and we discovered so much great stuff,” Primack says. “At some point, we might run out of places to go.”

With Denevan at the helm, that’s doubtful.