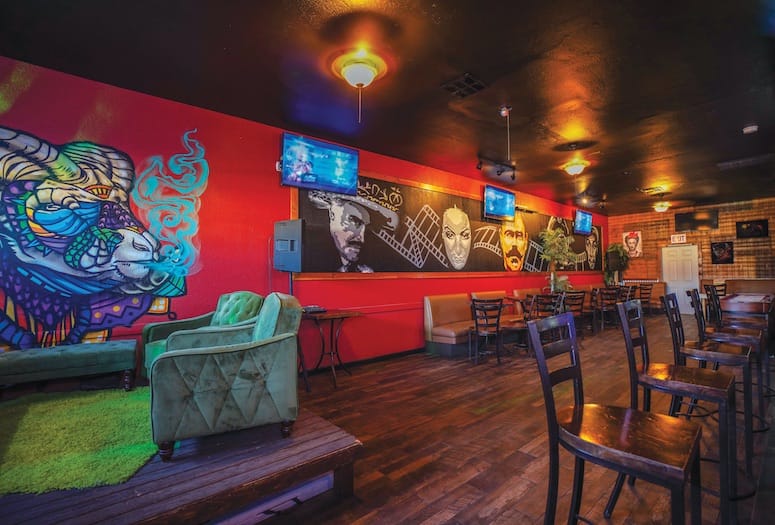 The arts flourish thoroughout the city, including at Coachella Bar, a popular performance space for local musicians.
PHOTOGRAPHS BY GREG PETERSON

There is new energy and excitement in Coachella as the city transforms into an epicenter not only for cannabis tourism and manufacturing, but also for thought leadership in California’s burgeoning cannabis industry.

“What was once a shadow industry, what was once for folks in the black market, is at the forefront of capitalism in cities, and it’s creating jobs,” Coachella Mayor Steven Hernandez noted during Coachella’s first annual SoCal Cannabis Summit in June.

The summit, the first of its kind in California, assembled more than 500 current and aspiring cannabis industry entrepreneurs as well as leaders of state agencies who are still in the early stages of developing guidelines and regulations for entrepreneurs seeking to develop cannabis businesses. The event included a tradeshow, tours of new local and regional businesses that are being fueled by the nascent cannabis industry and panel discussions covering topics of interest to entrepreneurs who want to ensure that they comply with applicable laws and regulations as they grow their cannabis businesses.

Coachella has already approved construction of more than 3 million square feet of industrial cannabis cultivation facilities, the largest of any jurisdiction in the state. Even though the city has exercised exceptional care in developing its own cannabis regulations, it recognizes the need to gather more information from state agencies.

“We were one of the first cities to see the benefits of the cannabis industry,” Hernandez said. “Being a pioneer in the industry brings both benefits and challenges.”

Coachella recognized early on that there was no single informational resource for current or aspiring cannabis business operators or government officials. Thus, the idea of the SoCal Cannabis Summit was born.

Coachella has already witnessed the benefits that cannabis businesses can bring to a city. Its manufacturing businesses have led to the opening of the city’s first dispensary, The Lighthouse, and to the construction of its first hotel, the 250-suite Hotel Indigo. Located on the southeast corner of Van Buren and Avenue 48, the hotel is being designed specifically to accommodate cannabis tourism as well as attendees of the Coachella and Stagecoach music festivals, held annually at the Empire Polo Club in neighboring Indio. The hotel is also sure to accommodate tourists who attend the famous golf and tennis tournaments that bring tens of thousands of visitors into the valley each winter. “ Hotel Indigo will rival the highest quality resorts in the valley,” Hernandez said. 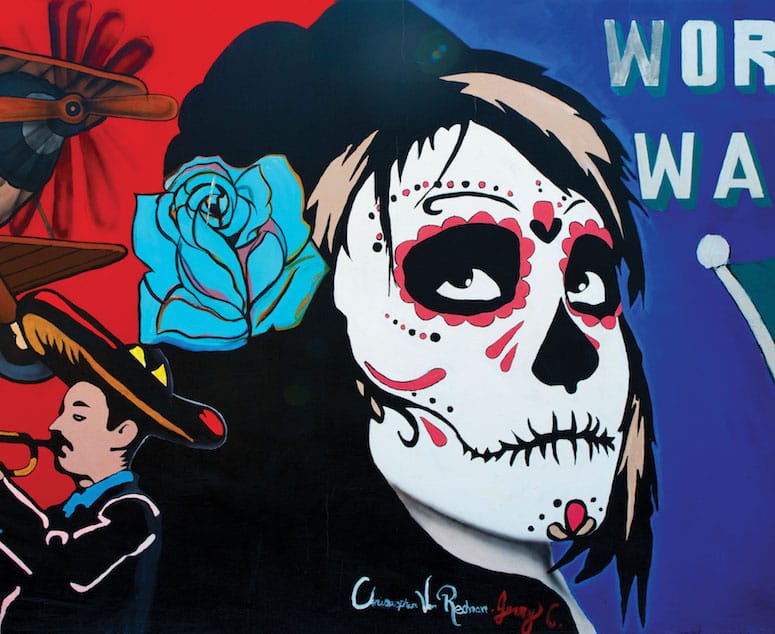 First conceived of in 1979 and revitalized by local artists in 2010, the Shady Lane murals celebrate Coachella’s deep-rooted Chicano history.

Demand for luxury hotel accommodations in Coachella is also being fueled by special events that take place at the HITS Desert Horse Park in Thermal as well as The Thermal Club, a private motorsports racing club that opened in 2012 and is considered one of the finest facilities of its kind in the world.

The one-story Hotel Indigo, slated to open in 2020, has a distinctive design with two-, four- and six-bedroom villa-style configurations. Each unit has almost 1,000 square feet of shared living and dining space, including a full-size kitchen with high-end appliances.

The focal point of the resort will be a 10,000-square-foot saltwater swimming pool that features a catwalk for fashion shows as well as a DJ booth for pool parties and special events. The pool has a cooling system to keep the water comfortably chilled on the hottest days.

Other amenities include a gym and yoga studio as well as a two-story restaurant that can be used for corporate meetings, for weddings, or as a club for entertainment. The restaurant will be able to accommodate almost 250 guests, both inside and outside, and will feature farm-to-table menu items as well as organically grown, locally sourced coffee. There will be an additional pool, bar, and grill with light fare that seats 150 people.

“Hotel Indigo will bring a new source of taxation and revenue to the city of Coachella,” Hernandez said.

• READ NEXT: Who is Pushing the Growth in Desert Hot Springs?

Coachella is also continuing to promote development of tourism-related businesses to further strengthen the appeal of the city as a tourist destination, according to Gabriel Martin, Coachella’s economic development manager.

But while Coachella’s name has powerful marketing power, thanks to the Coachella Valley Music and the Arts Festival, city officials also recognize that the city stands to gain by collaborating with other cities to promote the entire Coachella Valley as a destination while also publicizing their respective cannabis businesses.

“Similar to the way Napa Valley is known for wine, I think we are greater together than any single city by itself,” Hernandez said.

City officials and speakers at the SoCal Cannabis Summit also see cannabis providing a lasting economic stimulus for Coachella and other communities. “[This is] a moment in history I’m calling the ‘Cannabis Renaissance,’ ” Steve DeAngelo told the audience in his keynote address. “This plant is finally coming out of the shadows after having been stigmatized for the past century.”

DeAngelo, a 40-year veteran of the cannabis reform movement who was once dubbed “the father of the legal industry,” noted that cannabis has been used for medical purposes for thousands of years. The many uses of the plant, in fact, will be a topic for an additional day of discussions and commentary by expert speakers at next year’s SoCal Cannabis Summit, scheduled for May 2020.

Coachella officials believe additional summits will help guide businesses and policymakers as the cannabis industry continues to evolve. “This needs to be an ongoing discussion,” Hernandez said. “Our goal is to develop a cannabis think tank of sorts to shape policy at the state and local level.”

Meanwhile, Coachella is using revenue from cannabis and other businesses, combined with its growing retail sales tax revenue base, to expand city services. “[Cannabis businesses] are helping us pay for public safety and infrastructure that our residents rely on,” Hernandez said.

Additional revenue provides stimulus for major projects that have already transformed Coachella’s historic downtown in recent years, including Veterans Memorial Park, which opened in 2016; the 15,000-square-foot Spanish Revival–style library and conference center, which opened in 2018; and a county building, completed this year and also designed in a Spanish Revival style, that provides more than 200 employees to patronize downtown businesses. 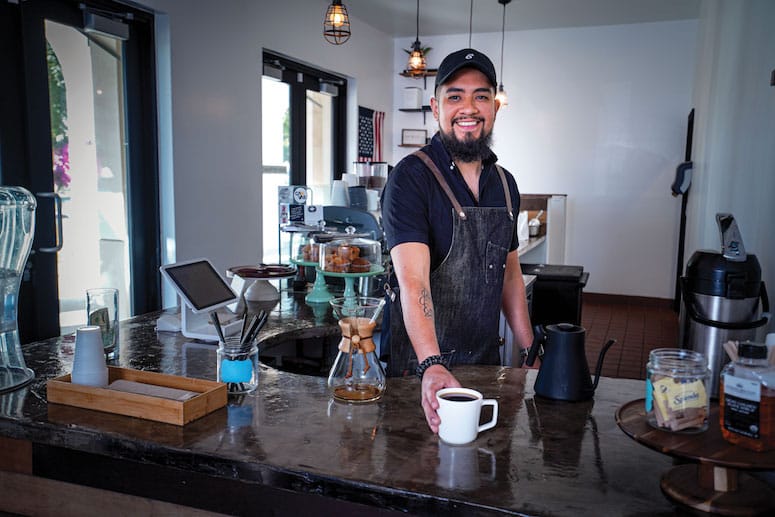 “We’re already seeing more activity in our restaurants and coffee shops and other businesses, and this should entice even more businesses to come to Coachella,” Martin said.

Coachella’s downtown, in fact, has been dramatically transformed. The library is more than three times the size of the city’s previous library and includes three study rooms, a program room, and separate reading spaces for children, teens, and adults. The 6,650-square-foot conference center, which hosted the inaugural SoCal Cannabis Summit, includes three meeting rooms and a pre-event lobby area. More spaces are available in the library for restaurants, art galleries, and other businesses of interest to residents and visitors.

The increased economic activity in Coachella has sparked a resurgence of homebuilding in the city. D.R. Horton, the nation’s largest homebuilder, plans to build 60 homes in the Prado Community and 215 homes in the Vista Escondida community in the next two years.

K. Hovnanian Homes has also contracted to purchase and build out 50 lots inside the Valencia community, while Coachella Village Partners is ready to begin construction of a 320-unit multifamily residential project on the southwest corner of Avenue 48 and Van Buren Street, near the Hotel Indigo.

• READ NEXT: Rancho Mirage Plans for the Future By Learning From Past.

Coachella is also attracting a growing number of retailers. “The city of Coachella provides a great environment for new businesses,” said Steve Larsen, who recently opened an Ace Hardware store on Grapefruit Boulevard. “We knew we wanted to be in the east end of the valley. We have lived in La Quinta since 2000 and recognize this is where much of the growth is happening in the Coachella Valley. We looked at locations in Indio, La Quinta, and Coachella. The location we settled on in Coachella provided the best rent-to-value proposition of anyplace in the valley.”

Larsen expects his sales to exceed Ace Hardware’s initial projections. “Both Coachella and Indio have a large population of do-it-yourselfers. We also saw a lot of business-to-business opportunities in Coachella, especially with the new construction going on.”

Roadways and bridge projects are also underway, including the Avenue 48 widening project, the reconstruction of Avenue 52 and 54, and citywide street rehabilitation with green bikeways. Coachella received a $3.2 million Urban Greening Project grant, the largest award of its kind in California, to plant shade trees and create pedestrian- and bicycle-friendly walkways and roadways along Grapefruit Boulevard in the Pueblo Viejo area between Leoco Lane and 9th Street.

“Coachella is being dramatically transformed as our economy grows and becomes more diversified,” Hernandez said. “But even amid all of this economic activity, we still continue to have more affordable land for development than any other city in the valley.”