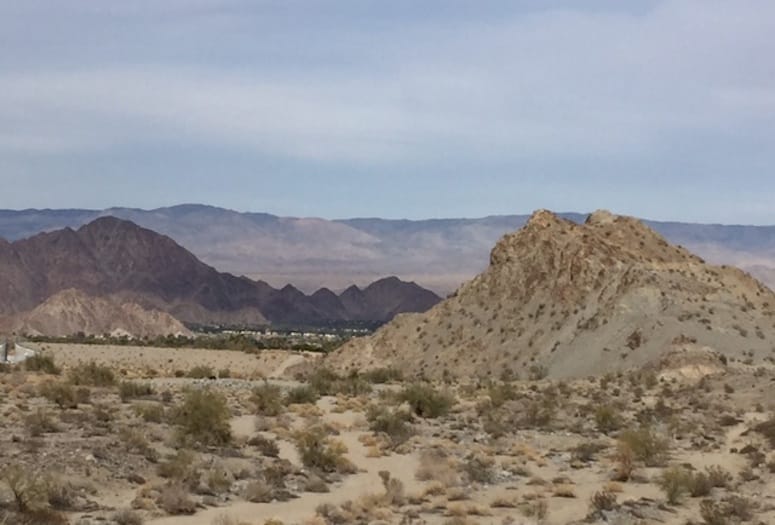 Certified desert naturalist and avid hiker Jane Udall embraces the environment she has grown to love since moving to the Coachella Valley in 2003. Her enthusiasm is infectious, which makes excursions in her company memorable.

“I’m enamored with the desert mountains and everything is so different than the Pacific Northwest,” says the former hospital administrator from Oregon who now lives in Rancho Mirage and leads hikes as a member of the Desert Trails Hiking Club. “As a hike leader, I try to enliven my hikes with information about what we’re seeing and how life thrives in this desert environment.”

Her treks routinely break for her to point out geological phenomena; it doesn’t take long to get why she’s been nicknamed “Geo Jane.”

Udall is an avid backpacker who has conquered most of the 210-mile John Muir Trail in Northern California, and several hundred miles of the Pacific Crest Trail that stretches from Canada to Mexico.

She’s especially fond of a 9.5-mile excursion starting at the southwest corner of the La Quinta Cove through the Bear Creek Ridge. It takes about five hours, and she generally breaks for lunch at 2,000 feet of elevation, near the summit. 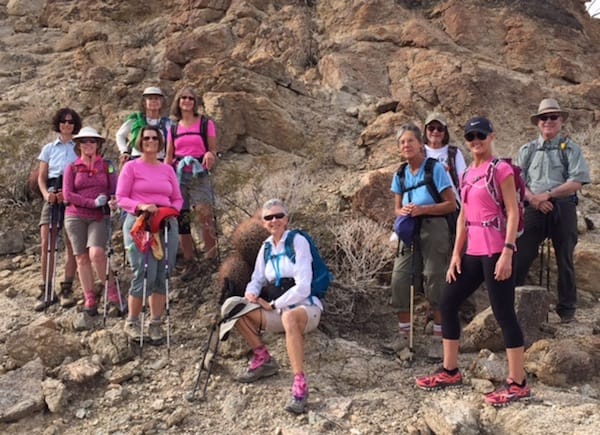 A group photo with leader Jane Udall  in the center.

Can you describe the start of the hike and what do you encounter along the ascent?
Jane Udall: We head south along the edge of a wide wash studded with palo verde trees, lavender, and cheese bush. Looming ahead of us are the Santa Rosa Mountains, which we will climb. After a half hour, we come to the end of the wash, marked by a lovely spreading palo verde tree. From here, the trail leaves the sandy and level part behind and becomes a series of rocky switchbacks ascending higher and higher above La Quinta, bearing more westerly.

As you ascend, you point out desert flora — how do these plants fare in the ongoing drought?
JU: As we climb ever higher, we note the abundance of different kinds of cacti — from pencil cholla in the wash, to silver and buckhorn and jumping cholla at higher elevations, then to some lovely clusters of hedgehog cactus and a whole hillside of barrel cacti. Ahead are wandlike and stately ocotillos. Others have fared poorly in the drought and have fallen. 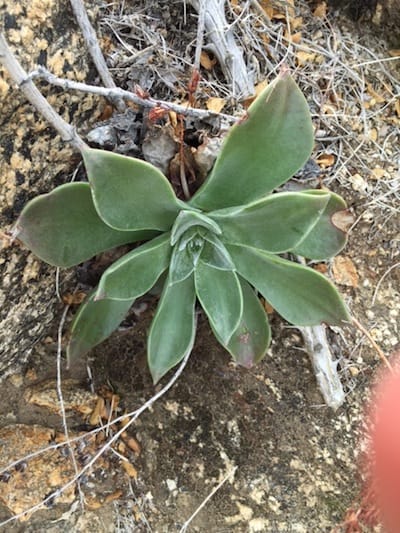 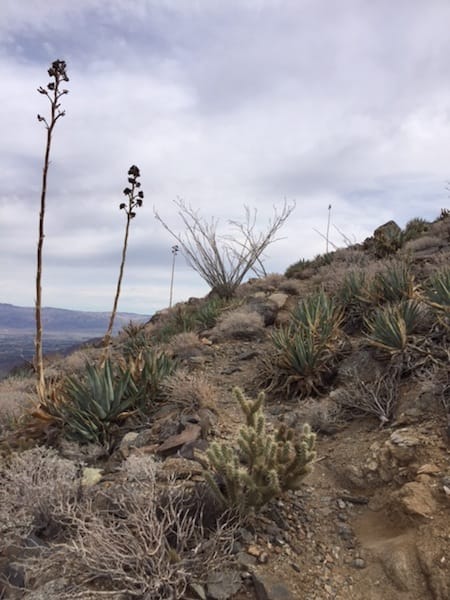 After an hour and a half, the group will reach a ledge; what do you see?
JU: Looking east, you will see the silvery surface of the Salton Sea and the tidy fields of our rich agricultural area, and to the west, the peaks of Mount San Jacinto and Mount San Gorgonio. We are within the boundaries of the Santa Rosa San Jacinto Mountains National Monument, and our vantage point also enables us to see land in the Coachella Valley Preserve, Joshua Tree National [Park], and San Bernardino National Forest.

What about wildlife along the way, especially sightings of the bighorn?
JU: You can see burrows that we know are home to ground squirrels, and sheep droppings, evidence that bighorn sheep are here, as well as coyote scat. When we reach the oasis, we have found an owl pellet and opened it up to find the bones of little creatures.

After two and a half hours, you generally reach your destination — what do you find?
JU: A thriving cluster of California native fan palms is tucked in a crevice. After dropping down into a dry creek bed, we will hike a short distance to the oasis and … enjoy our lunch. One time when we were leaving, I noticed a ledge of rock that looked different from the granitic rocks, often darkened with desert varnish that had been the main rock type we observed. I theorized that it might be limestone, so I pulled out a small vial of dilute hydrochloric acid and dropped a few drops onto the rock. Sure enough, it fizzed — evidence of calcium carbonate. This rock, now [nearly] 3,000 feet above sea level and 200 miles from the ocean, was formed in an ocean environment. Isn’t it something that it ended up where it is today? That’s what makes geology so interesting. “

Jane Udall is a longtime hike leader for Desert Trails Hiking Club. Join the club by visiting www.deserttrailshiking.com; yearly fee is $10 per person, $15 per family.

Guests are invited to hike for $5. For more information, email info@deserttrailshiking.com 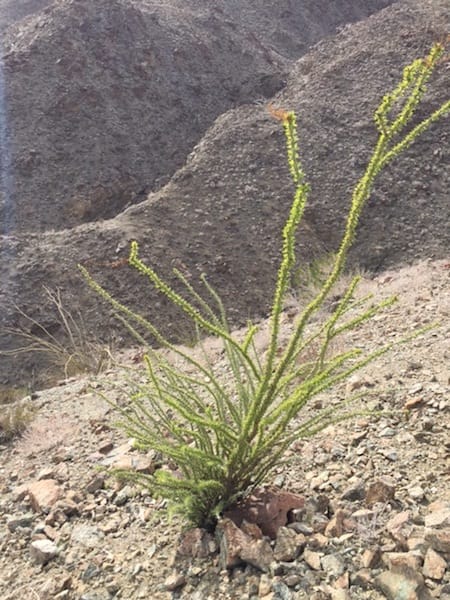 A newly leafed out ocotillo.